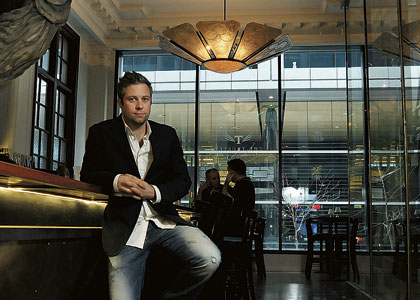 IF trading during their first week is any guide, the hospitality venues in the Brookfield Place heritage precinct will be a major drawcard in Perth.

The Trustee Bar & Bistro and The Heritage Brasserie, Bar & Boardroom opened last week in neighbouring heritage buildings and were bustling with customers from the very start.

“The opening days have been quite spectacular,” The Heritage’s Ed Wolkowinski said. “We were quite overwhelmed.”

The venue, which extends over two levels, is designed to be in the style of a grand European cafe.

“We want the hustle and bustle of an all-day brasserie,” Mr Wolkowinski said.

Customers can get everything from a coffee in the morning to a takeaway pastry or sandwich, a drink at the bar or private dining in the evening, including in the 20-seat boardroom.

The business includes a small downstairs bar, which trades as Babeche but operates under a single tavern licence.

The Trustee’s Scott Taylor has also been surprised by the response, with his 250-seat venue booked out on Tuesday night.

“I just didn’t really expect the demand to be this high,” he said.

Mr Taylor said he wanted to create a venue that was both approachable and elegant.

“It’s a sumptuous and beautiful venue that feels lived in,” he said.

In both cases, the heritage buildings at Brookfield Place were a major attraction for the experienced restaurateurs.

“The reason we came to this building was the heritage values it has,” said Mr Wolkowinski, whose family operates Halo restaurant.

The “grandeur of the sandstone”, the copper elevators, high ceilings and jarrah doors were some of the attractions of the Royal Insurance Building, which had been disused for 25 years.

“The venue feels like it has been here a long time,” Mr Wolkowinski said.

“We wouldn’t have been able to achieve that in a modern building.”

Mr Taylor, who runs The Beaufort Street Merchant with his sister, Angela, was full of praise for the assistance afforded by the Heritage Council.

Mr Taylor also discovered the high cost of turning a heritage building into a modern venue. This included measures to improve disabled success, but the biggest hit was for the air-conditioning and heating.

That investment has enabled Mr Taylor to install a wine vault that is a centerpiece of The Trustee’s bar area. With more than 500 wines, he is aiming to please discerning wine drinkers.

The Brasserie and The Trustee will be joined in August by four new venues in the former Newspaper House, which will be known as Print Hall.

There will also be a wine bar in the technical school building, along with numerous cafes and food stalls in the new buildings around the heritage precinct.