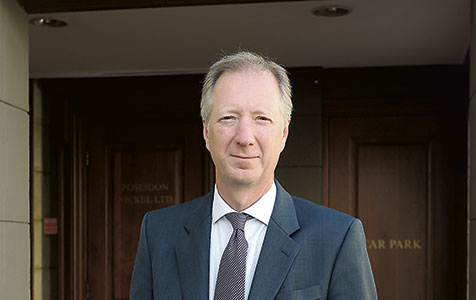 BIG PICTURE: David Singleton says the team at Poseidon "imagines the impossible and works back from that position and find a way to make it work"

HOW does the managing director of an aspiring nickel miner remain positive amid weakening commodities prices and an equities market in decline?

Poseidon Nickel’s David Singleton, who needs to raise nearly $200 million to develop the company’s Windarra project, has a simple approach.

“In this organisation we talk about ‘imagining the impossible’; go out there and imagine the impossible and work back from that position and find a way to make it work,” Mr Singleton told Business News.

And it seems Poseidon is not alone in taking this approach.

Fortescue Metals Group chairman Andrew Forrest seems to have lived his life by the same motto and he encourages that type of thinking at Poseidon, which he also chairs.

“One of the great things about having Andrew around is that he is a big, free thinker,” Mr Singleton said.

“When you talk to him about ideas the group has generated, you always find a very receptive ear.”

Mr Singleton has been at Poseidon for five years, and the nickel market has been weak for most of that time.

The weak conditions have prompted some miners, such as Xstrata and Norilsk, to close mines, while listed nickel producers such as Western Areas, Mincor and Panoramic are battling to make a decent return.

Despite the woes all around, Mr Singleton has been focused on completing the definitive feasibility study for its Windarra project.

The company has already spent close to $100 million on an extensive drilling campaign, pumping water out of the old mine (a two-year project), refurbishing the decline, and completing engineering studies.

The feasibility study concluded that Windarra is a robust and viable project, if Poseidon spends a further $197 million to bring it into production.

Mr Singleton is under no illusions about the challenge, however.

“Right now we’re in a particularly weak commodities market, particularly in base metals and nickel,” he said.

“But we’ve always been big believers that there is always a big day for nickel to come.

“The important thing is not the price today but what the price will be when we get into production in a couple of years’ time.”

Mr Singleton brings a fresh perspective to the mining sector. He worked in the UK defence industry for 20 years before moving to Australia nearly a decade ago to join engineering company Clough.

“That was where I got to know Andrew (Forrest) quite well, because Clough was talking to Fortescue about doing construction work,” he said.

That connection proved instrumental when Mr Forrest was looking for someone to run Poseidon.

“I enjoyed taking the management expertise and applying that in an industry I didn’t know as well,” Mr Singleton said.

Many people greeted the company’s plans with scepticism, however.

“Observers said we were taking an ore body that had been mined out and other people had been exploring the area for 20 years … that we couldn’t possibly find another ore body,” Mr Singleton said.

Poseidon proved the doubters wrong when it discovered the Cerberus ore body; unfortunately its timing could not have been worse.

“There haven’t been many brand new ore bodies discovered on this state. We announced it two weeks after Lehman Bros collapsed, so it had a very minor impact,” Mr Singleton said.

Continued drilling at the old Windarra mine and at Cerberus means Poseidon now has a “very large” resource of 144,000 tonnes – about the same as when the mine was first developed, and enough to sustain mining for at least 10 years.

Mr Singleton strongly endorses the early decision to rename the company Poseidon, after the company that started the famous 1969 nickel boom.

“Looking back, I think it was an inspired choice,” he said. “It creates a great deal of brand recognition very quickly.

“When I do presentations, in London, in Hong Kong, in Singapore, and certainly Sydney, when you talk about Poseidon there is always somebody in the room who has a bit of a story to tell.

“The more important aspect of the history is that it plays to the lower risk nature of restarting a brownfields mine as opposed to a brand new greenfields mine.

“The knowledge of what has gone before is creating the engineering solutions for the business in the future.”

The historic Mt Windarra mine will account for about two thirds of production, while the new Cerberus mine will supply the balance.

Looking ahead at development of the project, Mr Singleton acknowledges Western Australia has very high costs, especially for labour, but is unperturbed.

“We can sit back and bemoan that situation, or we can look for innovative ways of dealing with cost problems,” he said.

This is where ‘imagining the impossible’ kicks in.

One example is the possibility of using wind power to reduce its power bills, in particular the $22 million the miner is forecast to spend every year on diesel.

“Bringing in renewables would allow us to dramatically reduce the amount of diesel power over the life of the project,” Mr Singleton said.

Another example is its use of the Wassara drilling system, through local contractor Rock Team.

At the heart of this system is the patented Wassara ‘in the hole hammer’, which is powered by high-pressure water instead of air.

Mr Singleton said the Wassara system would allow the drillers to pinpoint the ore-body without the expense of slow diamond drilling and the need to handle copious amounts of barren core.

“The easiest way to explain this is that we now have the capability to drill at RC rates from underground, with the added benefits of low energy use and no dust or potentially explosive environments created by compressed air,” Mr George said.

Mr Singleton said it was that kind of innovative thinking that had been a cornerstone of what had brought Poseidon back.

“The other thing we have done that has proven to be important to this project is the treatment of gold tailings,” he said.

The project will produce 45,000 ounces of gold in its first three years; Mr Singleton says a lot of drilling and engineering work was needed to make the gold treatment work efficiently.

The all-important number that Poseidon can’t control is the nickel price. Its feasibility study, completed by local company Arccon, used an average nickel price of US$8.46 per pound.

The average spot price for the year to date is even lower, at US$7.68/lb.

Mr Singleton anticipates the market price will be north of US$10/lb in three to four years’ time and quotes a range of economic analysts to support that view.

Consensus Economics, which aggregates research from 30 different groups, concludes that nickel is one of only two commodities (uranium is the other) expected to achieve price growth over the next few years.

The Commonwealth Bank and others are actually forecasting a shortage of nickel later this decade.

Mr Singleton is working on the basis that others also see a more favourable longer-term outlook.

Poseidon has signed up Credit Suisse to arrange funding for its project. Its strong preference is to be 100 per cent debt-funded so that it doesn’t have to go back to shareholders for more capital.

“We’ve been working on that for several months. The commitment we’ve made is to do everything we can to make this fully debt funded.”

Credit Suisse is a major lender to the mining sector, having completed deals over the past year for companies including La Mancha, Aurora Oil & Gas, Kingsrose Mining, Sumatra Copper & Gold and, most significantly, FMG.

“Obviously that translates, through Andrew, to their focus on us. Again, that is one of the great assets we get from Andrew,” Mr Singleton said.

Completing the funding will be a major undertaking for Poseidon, which had just $8.6 million cash on hand at the end of March and has been paying its directors fees in shares, in order to preserve cash.

But as ever, Mr Singleton remains positive.

“There is no doubt when you are at the bottom end of the cycle, things are more difficult, financing is more difficult, but a lot of people are able to look through the cycles going forward and take a more positive view.”