Almost $1.2 billion in dividends flowed to the state government from 11 of its businesses in the year to June 2019, according to their recently published annual reports. 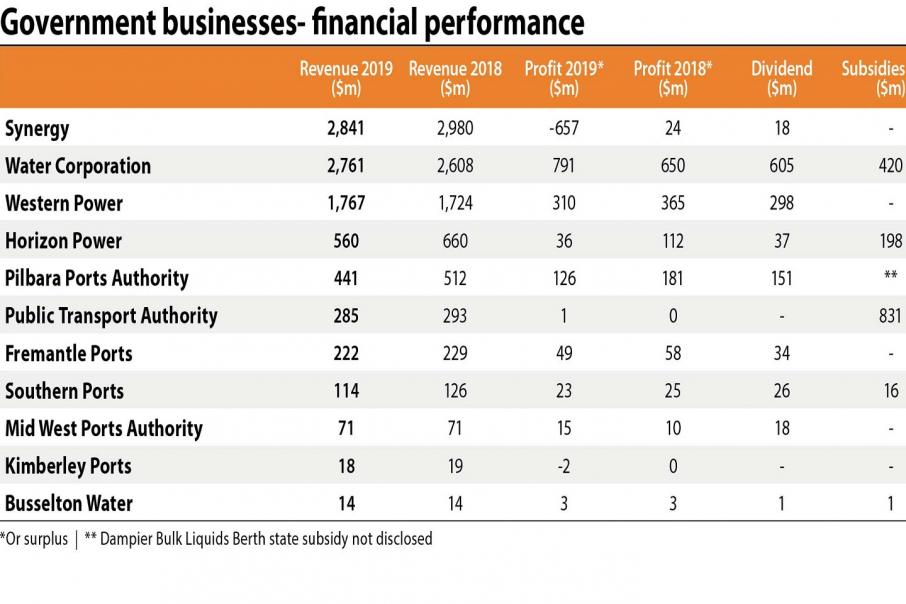 Almost $1.2 billion in dividends flowed to the state government from 11 of its businesses in the year to June 2019, according to their recently published annual reports.

The Water Corporation and Western Power were the two biggest contributors to the state’s coffers, paying $605 million and $298 million of dividends respectively (see table).

However, underneath the raw numbers are other underlying transactions that complicate matters.

Water Corporation received $420 million of operating subsidies, with $255 million for country water, sewerage and drainage, and $166 million of concession payments for pensioners and seniors.

Western Power reduced its dividend by 29 per cent on the 2018 financial year.

In Western Power’s case, the equivalent expense was $153 million, but much of that was deferred to the corporation’s balance sheet as a liability.

The entity carries about $889 million of deferred tax liabilities to the state government, a number that was the source of some discussion in the lead-up to the 2017 state election, when there was a proposal to partially privatise the business.

For some businesses, cash flows the other way.

Among the 11 entities analysed by Business News, total subsidies were nearly $1.5 billion.

The Public Transport Authority of WA received about $831 million in subsidies in 2019, earning revenue of $285 million.

Taxpayer support was more than triple the ticket price for an average user on the network.

At Synergy, no subsidies were paid in the 2019 financial year, the first time since disaggregation, although the corporation took a $446 million impairment hit.

The numbers behind Horizon Power make for an interesting case.

The utility for regional areas earned a profit of $36 million in the 2019 financial year, down about 68 per cent, mostly on the back of lower developer contributions for projects.

The business also received $198 million in tariff equivalent contributions, a fee collected from Perth customers by Western Power and passed on to subsidise electricity in regional areas.

These contributions were up 18 per cent on the previous year.

The net impact of those numbers is that metropolitan consumers are chipping in to fund dividends to the state government via the regional power provider.

Many enterprises reported lower profits in the 2019 financial year.

Water Corporation was the exception, with profit up 22 per cent to $791 million on a revenue increase of 6 per cent to about $2.8 billion.

Profitability at Pilbara Ports fell 14 per cent in large part because of a one-off revenue boost in 2018, flowing from a $71 million commercial arrangement for dredging operations.

Profit fell 16 per cent to $49 million at Fremantle Ports, with the main moving variable being a $5 million fall in cargo charges to $136 million.