A major reform package for Western Australia’s ports will take away the entitlement of major port customers to a seat on the port authority boards, and allow the ports to operate 24 hours a day. 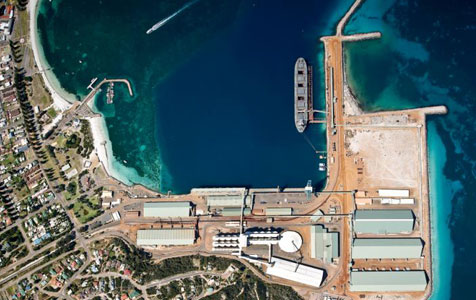 A major reform package for Western Australia’s ports will take away the entitlement of major port customers to a seat on the port authority boards, and allow the ports to operate 24 hours a day.

Legislation introduced today will consolidate seven regional port authorities into four overarching authorities, with Fremantle continuing on its own.

“The current governance model has served the state well but times have changed and we need to reinvigorate how our ports operate,” he said in a statement.

The legislation removes the entitlement of companies such as BHP Billiton, Rio Tinto and Woodside to have representation on the Port Hedland and Dampier port authority boards.

“The removal of port customer directorships will avoid future conflicts of interest and eliminate the perception of unfair advantage, particularly from competing companies who are also port customers but not on these boards,” Mr Buswell told parliament.

“All port customers will continue to have opportunities for dialogue with port authority executives, including through port user groups.”

The relevant minister will in future appoint boards with five to seven members “with suitable skills, commensurate to the scope and complexity of the ports which they will control and manage”.

The legislation also provides for the establishment of port community consultation committees, including local government, to facilitate public information sharing.

A provision has been added to the Port Authorities Act 1999 to provide that port authorities can operate 24 hours per day, subject to compliance with the Environmental Protection Act, including noise and other licence requirements.

“Ports are expected these days to be open all hours to service vessels and facilitate the safe movement of vessels and trade,” Mr Buswell said.

“This legislation clarifies government expectations of port authorities by specifically providing a power for port operations to take place on any day and at any time.”

The staged amalgamations are set to be implemented from July 1 2014.

A second phase will involve the transfer of control of 13 non-port authority ports to the new regional port authorities.

The four new regional port authorities will eventually include:

• a Kimberley Ports Authority comprising the port of Broome, the proposed port at James Price Point, and the non-port authority ports at Derby, Wyndham, Cockatoo Island and Koolan Island;

• a Mid West Ports Authority comprising the port of Geraldton, the proposed port of Oakajee, and the non-port authority port facilities at Cape Cuvier and Useless Loop; and

• a Southern Ports Authority comprising the ports of Bunbury, Albany and Esperance.

The legislation enacts reforms previously foreshadowed by the state government.