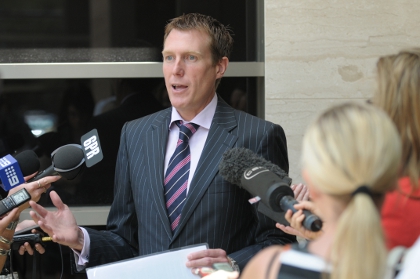 Treasurer and Attorney-General Christian Porter has stunned the state government by resigning immediately from his ministerial roles, and confirming that he plans to leave state politics and make a run for federal parliament.

At a press conference this morning, Mr Porter said he had been thinking about the move for four months, and had consulted only with his wife and the premier, Colin Barnett.

He said the premier has been “nothing but generous and supportive”.

"I’ve made a determination after four years in politics that if you’re going to make a career commitment to politics, and sometimes politics can be quite tough, you’ve got to be absolutely certain that you’re living your own version of your own career and not someone’s expected version of your career," Mr Porter said.

"I’ve come to a view, which I cannot shake now, that I could make a contribution to the advancement of a number of very important issues, issues that I’ve come to feel very strongly about, and issues which I think are absolutely critical to the State of WA and to the entire country.

“And I’ve also formed the view that my greatest chance of making any kind of impact with respect to those issues is in a federal parliamentary setting.”

Colin Barnett will take over as interim Treasurer, while Norman Moore will step in as Justice Minister until the end of the current parliamentary session.

He said he had tried to convince Mr Porter to stay with state politics for at least another term, but respected his decision to move to federal politics.

"That has been his ambition, and I respect his decision.

“It’s not selfish and people have a right to pursue their career; my only disappointment is that Christian hasn’t done what I would have liked and that is another term in state politics.”

The shock news of Mr Porter's planned switch was first reported by the ABC last night, and will be a major blow for the state government.

Mr Porter holds two of the most senior portfolios in the government and was widely seen as the logical successor to premier Colin Barnett, at some time after the next state election.

Mr Porter confirmed that he planned to seek preselection for the Liberal-held seat of Pearce at next year's federal election, but did not offer any other details.

Judi Moylan, the Liberal member for Pearce since 1993, has previously announced her retirement at the next election.

Mr Porter's announcement will come just three weeks after he handed down his second state budget.

It is understood his decision was first raised at senior government levels yesterday during a community cabinet in Joondalup.

Mr Porter said he had spoken to federal Liberal leader Tony Abbott early today as a courtesy after giving formal notice of his move last night to a small group of colleagues.

"I think there's a degree of understanding among my party room colleagues about this decision and I would expect some degree of support," Mr Porter said.

Political analyst Harry Phillips said it was a setback for the state government.

"It's understandable in many ways because many people say that if you want to go to the big stage where key decisions are made in Australian politics, you'd move to the commonwealth parliament," Mr Phillips told ABC Radio.

"The more people that put their hand up for involvement in the Australian political sphere, the better," Mr Swan told ABC Radio.

Opposition leader Mark McGowan said the events had thrown the government into turmoil and Mr Porter's decision was irresponsible.

“The budget has not yet been passed by parliament and yet the treasurer has resigned; that is showing a major disrespect to parliamentary processes, to the future of Western Australia.”