Price and production uncertainty over a range of commodities is flowing through to port investments, with enthusiasm for development taking a back seat to pragmatism. 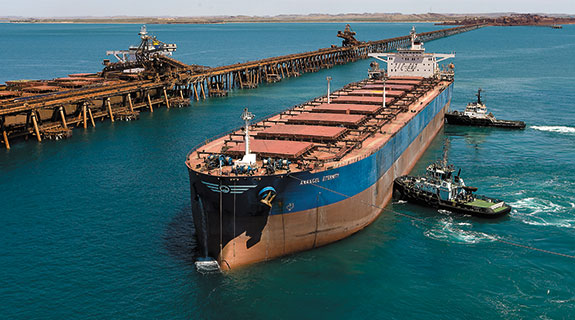 Price and production uncertainty over a range of commodities is flowing through to port investments, with enthusiasm for development taking a back seat to pragmatism.

Tumbling iron ore and oil prices have cast doubt on the viability of a number of long-planned Western Australian port projects, with some in a hiatus and others still in planning and feasibility phases.

Of the private projects, only Chevron’s Wheatstone and Gorgon LNG terminals and associated equipment are still being completed, while the mining sector’s malaise mining has raised doubts over the state government’s privatisation program.

The biggest project still moving forward is the Anketell port and rail complex for the West Pilbara Iron Ore project, led by Aurizon and underpinned by Chinese company Baosteel.

In Aurizon’s half-yearly ASX update, the company said evaluation of the $7 billion development was progressing, with due diligence on target and supplier quotes being assessed.

The final investment decision would not be made until at least 2016, however.

If the plan goes ahead, the port would reportedly have an export capacity of up to 350 million tonnes per year, around the level of Port Hedland, which is near capacity.

By contrast, BHP Billiton, which had sketched out the most substantial port project planned in WA with its Port Hedland outer harbour development, has put that investment on ice.

The company contends it will continue to look to efficiency improvements at its port operations ahead of proceeding with the $20 billion investment.

Further growth in its supply chain capacity, up to 270mtpa, could be achieved without the need for additional fixed investment, BHP has said.

“Beyond that, the inner harbour debottlenecking and Jimblebar phase 2 projects have the potential to increase total capacity to 290mtpa by the end of the 2017 financial year at very low capital cost,” BHP said.

The company recently completed a $US1.7 billion ($2.2 billion) upgrade of the facilities at the port, including new ship loaders, a conveyor belt and rolling stock.

Blending facilities at the port and rail yards were also developed at a cost of $US1 billion.

Port Hedland is the state’s busiest port by volume, with exports of around 370mtpa.

The iron ore price collapse is also having an impact at the furthest southern reaches of the state.

The Esperance Multi-User Iron Ore Facility development is on hold, despite the Asciano-led Yilgarn Esperance Solutions consortium winning a bid for the project last year.

“The Esperance upgrade is a casualty of overproduction, with an expansion unlikely in the short to medium term.

“Ironically, the low price makes the port more attractive, as it can slash $10 per tonne off transport costs due to it being capesize capable.”

Capesize vessels are the largest class of bulk carrying vessels; and the ships are getting bigger, with Brazilian giant Vale now using a fleet of ‘very large ore carriers’ with capacity of up to 400,000 tonnes each.

The vessels reduce costs for the substantial journey from Brazil to East Asia, putting pressure on domestic producers to find further ways to improve their freight competitiveness.

In February, Lanco revealed Griffin had sustained losses of almost $45 million for the December quarter, after the contractor running the mine pulled out over allegedly unpaid debts.

A similar system, which loads ships off the coast, has been used for a project in South Australia.

Mineral Resources is responding to the downturn with other innovations, including pursuing lateral proposals such as the BOTS rail/conveyor belt system, which is effectively a sky rail.

The fall in commodity prices is a double blow for the state government, which will now receive a lower price for its port sales, if the facilities can be sold at all.

With the voluntary suspension of Atlas Iron shares from ASX trade last week, the state government now has a greater challenge to find potential buyers for the Utah Point port.

The sale of Dampier Marine Services’ facilities, announced by former transport minister Troy Buswell in February last year as part of the government’s program to return the state to a AAA credit rating, is another likely target.

The project was planned as a public private partnership, one of four potential such partnerships in WA, with the government hoping a private operator could increase capacity at the port without relying on the public purse.

“More private sector investment at Dampier Port will help alleviate capacity constraints and delays, ease road congestion by allowing freight to be transported by sea to the port, while removing risks to government associated with financing, building and operating the facility,” Mr Buswell said at the time of the announcement.

The facilities would include the Dampier bulk liquids berth, cargo wharf, and seven hectares of land, although the future of the project looks uncertain.

A PPP arrangement has also been floated for the development of a dedicated terminal for automotive and roll-on/roll-off trading at Fremantle Port’s Victoria Quay, and a bulk liquids terminal at Kwinana.

The expressions of interest process for the Victoria Quay facility resulted in two potential operators being shortlisted – WWL and AAT.

Both are integrated logistics businesses with operations elsewhere in Australia, and will submit proposals for the long-term lease before the end of this month.