Trans-shipment has been floated as a solution to capacity constraints at bulk export ports in the state’s north. 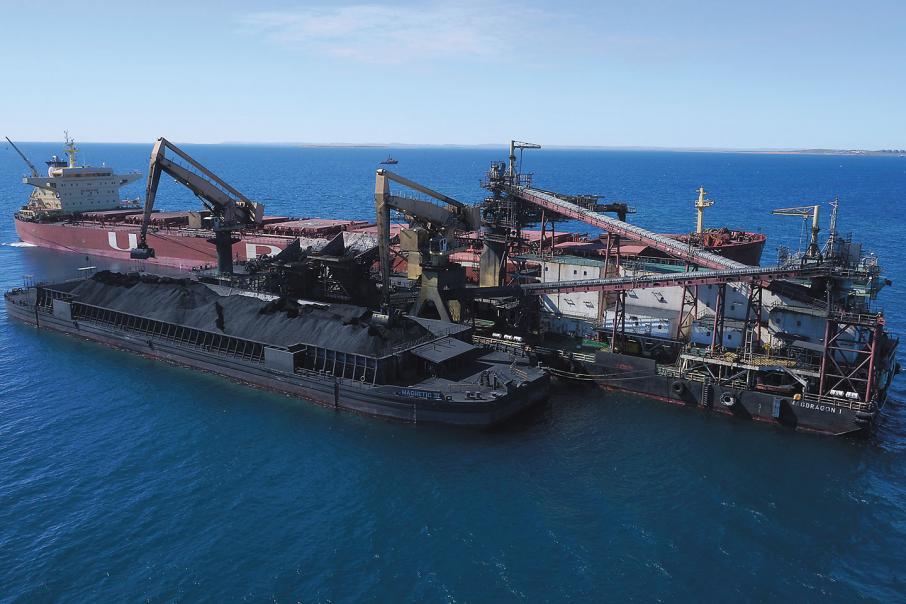 Trans-shipment has been floated as a solution to capacity constraints at bulk export ports in the state’s north.

A local business says it can lift throughput at major bulk export terminals such as Port Hedland without massive capital investment by using trans-shipment, with its case boosted by German multinational ThyssenKrupp’s recent intervention as a shareholder.

North Fremantle-based National Ports Corporation chairman John Jenkin said the company had spent about $4 million developing plans for a self-loading, super-shallow draft bulk carrier vessel to navigate waterways that might otherwise require dredging. The vessel’s ability to operate in shallow waters would allow it to open up terminal capacity that might otherwise be limited by tide movements, such as at Port Hedland.

The National Ports carrier would have a draft (or depth) of 14 metres, while many capesize vessels would need waters at least 19 metres deep fully loaded.

Although there would be an additional operating cost, the benefit would be the lack of large capital investments, for dredging, for example, Mr Jenkin said.

With an estimated 480 million tonnes passing through the Port Hedland berths at the moment, according to National Ports, the facilities were approaching capacity, he said.

An outer harbour development at Port Hedland previously proposed by BHP Billiton to increase throughput had an estimated capital cost of $20 billion.

The National Ports plan would instead increase tonnes incrementally at one or more berths, Mr Jenkin said.

However, a source familiar with the industry said it was highly unlikely BHP would use trans-shipping at the Port Hedland operation, as it probably wouldn’t have sufficient economies of scale.

An additional issue was that it might create congestion at the port and consequently reduce throughput.

Nonetheless, National Ports is currently tendering on five projects, including three in Australia.

Mr Jenkin said the concept would be beneficial for smaller miners, given it would lower the amount of capital expenditure required for them to set up exporting operations.

He said ThyssenKrupp would be partnering in the development of the vessel, and would be responsible for the design and construction of the on-board materials handling equipment.

The deal was completed in the December quarter of 2016.

“ThyssenKrupp holds something less than 10 per cent of the company’s shares,” Mr Jenkin said.

“In addition, they have helped fund worldwide patents for the designs.”

That operation uses tugs to push barges carrying up to 15,000 tonnes of iron ore each out to a depth where bulk carriers can be loaded by two stationary trans-shipping platforms.

An upcoming project likely to use trans-shipment is Todd Corporation’s Balla Balla project in the Pilbara.

That $6 billion project will involve a 160-kilometre railway line from a port on the coast to the central Pilbara, where it will provide access to a number of stranded iron ore deposits.

Up to 50mt per year will be exported through the railway and port, according to Balla Balla.

Rutila Resources, which was purchased by Todd Corporation in 2015, had planned to use trans-shipment shuttle vessels to avoid the need for dredging to give its iteration of the project seagoing access.

The facility would have cost $375 million, Rutila estimated in 2013, giving it a capital intensity of $16/t.

The most recent estimate, when the state agreement for the Balla Balla project was signed in January this year, was for the rail line and port to cost a combined $3 billion.

Iron Ore Holdings (later acquired by BC Iron) and Mineral Resources had also considered trans-shipment options, although Business News understands it is no longer on the radar for Mineral Resources.