The Pilbara Ports Authority lifted throughput to a record 619.8 million tonnes in 2014-15, primarily on the back of a 21 per cent jump in iron ore shipments through Port Hedland offsetting a small decline at Dampier. 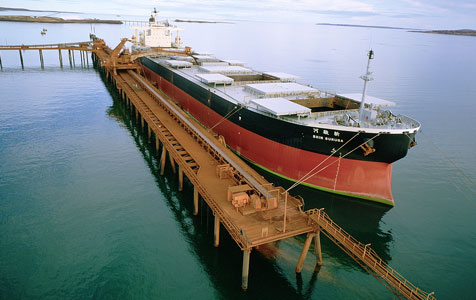 The Pilbara Ports Authority lifted throughput to a record 619.8 million tonnes in 2014-15, primarily on the back of a 21 per cent jump in iron ore shipments through Port Hedland offsetting a small decline at Dampier.

Iron ore shipments from Hedland increased to 439.6mt, on the back of increased volumes from miners BHP Billiton and Fortescue Metals Group.

In contrast, exports through Dampier were affected by issues facing Rio Tinto, which is the major user of the port.

Total exports through Dampier dipped by about 3 per cent to 171.8mt.

This followed Rio recently reporting a 12 per cent decline in Pilbara sales in the March quarter, after its operations were affected by a tropical cyclone and a train derailment at Dampier.

The Pilbara Ports Authority data does not include the export facilities at Cape Lambert, which is operated by Rio Tinto and has been a major focus of its expansion program.

The surge in iron ore exports from Australia (and Brazil) combined with weaker economic growth in China has resulted in lower iron ore prices.

The iron ore price fell six per cent to around $US55 overnight after dropping through the $US60 barrier earlier in the week.

Many analysts believe the price of Australia's biggest export earner will again fall below $US50 a tonne because of a global oversupply.

The price falls have almost sent some high-cost junior Pilbara producers such as Atlas Iron to the wall.

Atlas Iron, which has a $US50 a tonne break-even price, has now re-opened all three of its Pilbara mines after suspending all mining and trading in its shares in April.

The company was losing money when the iron ore price plunged to decade lows below $US50 a tonne, but it has since responded by striking a profit sharing, cost cutting deal with its contractors.

Meanwhile, the big iron ore miners appear determined to push on with increasing output, with Sam Walsh, the head of Rio Tinto on Wednesday saying it was important for the company's 10-year Pilbara expansion to come to fruition.

While some high cost producers would be forced to shut down, the current downturn was sowing the seeds for the next recovery, he said.

Shares in all of Australia's Pilbara iron ore miners were under pressure on Friday amid wider market losses.