No-one in Western Australia needs to be told that the state is passing through a rough patch; it’s in their face every day. 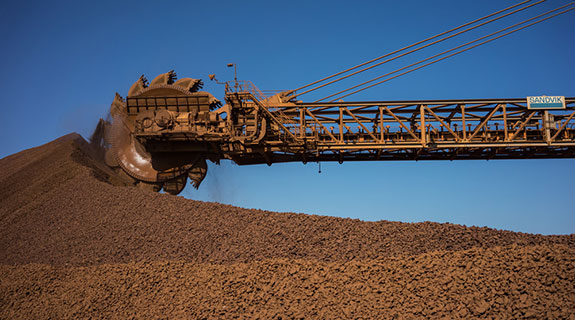 Rio Tinto, which operates iron ore, diamond and salt projects in WA’s north, has fallen by 20 per cent on the ASX over the past 12 months.

No-one in Western Australia needs to be told that the state is passing through a rough patch; it’s in their face every day.

However there are three new ways to measuring just how challenging conditions have become – two are on the stock market, and third is in a fresh report about the WA economy.

On the market, the share prices of two companies that represent a large slice of the state’s important resources sector have dropped to be within a few cents of seven-year lows.

Rio Tinto, operator of iron ore, diamond and salt projects in WA’s north, has fallen by 20 per cent over the past 12 months, while BHP Billiton, which has even more extensive interests in the state when its oil and gas assets are included, is down 22 per cent this year, and 5 per cent in the past month.

Those share prices are telling a story of the low prices being paid for most raw materials as the global economy stumbles, and China slows, but they can also be seen as a proxy for the WA economy, which is struggling in the aftermath of the state’s biggest-ever project construction boom.

The latest ‘Coast-to-Coast’ report by the institutional banking division of Westpac provides the third measure of the downturn.

It’s a document that looks at the overall Australian economy and then takes a state-by-state view of the country.

Nationally, the bank describes the Australian economy as performing ‘unevenly’ with growth stuck ‘below trend’ (something we all probably knew).

Westpac chief economist Bill Evans noted that home building and exports of resources and services were positives for the economy, while mining and non-mining investment were creating drags on growth.

WA, however, is in worse condition than the country as a whole, facing a potent combination of shrinking investment, income pressures and ‘reversing migration flows’.

That last point – more people leaving the state than arriving – is one of the more worrying features, because without a migration inflow there are a number of industries that could face a more difficult 2016 than what they’re experiencing today.

The most obvious area of concern when considering the question of WA’s population not growing as fast as it was (or even stagnating) is in the area of residential property; and that’s when a graph produced by Westpac will send a shudder down the spine of every real estate agent in Perth. 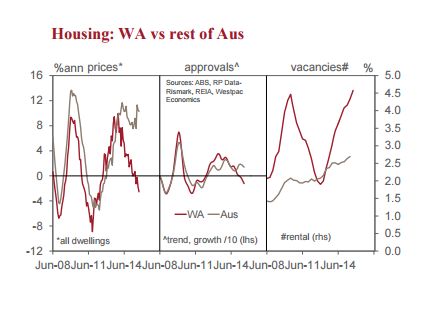 The graph, which is miniscule and a beast to reproduce here, is the one on the left of the trio and tracks WA housing versus the rest of Australia.

On the basis of a percentage annual change of all dwellings, which is what the graph shows, WA’s price movement resembles a ski-slope; up spectacularly with the rest of the country from around June, 2011, and then back down to a current position below where the average was four years ago.

In other words, the rising prices enjoyed in the years after the GFC (when cheap money seemed so attractive) has been more than wiped out.

The rest of the country, heavily influenced by what are likely to be unsustainable booms in Sydney and Melbourne residential property, broke away about two years ago and continued rising as WA started its fall.

It’s a similar story in the dwelling approvals graph (centre), with WA falling sharply, and even more obviously in the dwelling vacancies graph (right), which shows WA’s vacancy rate soaring while rest of the country rises slowly.

In time, given the roller-coaster nature of the WA economy, those graphs will reverse, as they always have in past periods of slow growth, or no-growth, which is what the state might be experiencing now.

The key, as ever, will be the level of demand for WA’s exports; that, in turn, depends on the health of the Chinese economy, and prices for the commodities that are the state’s lifeblood.

On that score there is a hint of good news on the horizon, though perhaps not for motorists.

Oil prices, which determine the level of development of WA’s liquefied natural gas industry, could be set for a sharp rise in the New Year.

Norwegian energy consultancy Rystad Energy warned earlier today that, as high-cost oil and gas producers are driven out of the global market by low prices, the stage is being set for an oil-price boom thanks to a potential squeeze on available supplies.

Spare crude oil capacity of Saudi Arabia, according to Rystad, stands at just 1.1 million barrels a day; not enough to make up for any unexpected outages, or for normal growth in demand over the next 12 months.

An upward price spike could occur as early as February, Rystad said, perhaps serving as a wake-up call about the importance of maintaining investment in oil and gas, or risking a return to sky-high prices in the future – which might not be a bad thing for WA.