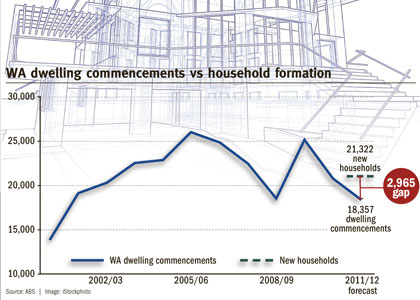 THE latest figures from the National Housing Supply Council and the Australian Bureau of Statistics present a challenging outlook for housing accessibility in Western Australia, with a growing population facing new homes activity at an all-time low.

The council’s ‘Housing Supply and Affordability: Key Indicators 2012’ report estimates a ‘dwelling gap’ of about 4,000 for the year to June 2011.

In response to the document, Urban Development Institute of Australia WA chief executive, Debra Goostrey, said WA had experienced a cumulative shortage of 38,000 dwellings since 2001.

Figures from the Australian Bureau of Statistics last week show WA leads the nation with an annual population growth rate of 2.9 per cent, and five-year growth of 14.2 per cent. By 2021, WA will have a population of between 2.61 million and 2.93 million, while the number of households is expected to increase by 21,322 each year for the next five years.

Ms Goostrey said dwelling commencements in WA were at the lowest since 2000-01, when just 13,866 new dwellings were built in the state.

“We are far from those lows but we still have a way to go before neutralizing the population-versus-housing imbalance. WA is on track to reach around 18,500 new dwellings if the June quarter continues like the last, but the problems with the new Building Act may place a further brake on commencements,” she said.

“ABS projections indicate we would need to construct 26,000 dwellings each year to 2020 to overcome the current deficit, which is higher than the 25,000 new dwellings constructed in 2009-10 when the First Home Owners boost and social housing funding stimulated the market.”

“It will turn to the purchase market at some point and the velocity with which it is happening will cause pain for tenants, builders and developers. The supply reaction time is always slower than the demand,” he said.

Master Builders Association chief economist Peter Jones shared similar sentiments in a recent statement, saying consumers were nervous due to uncertainty around the euro crisis, a minority government and the pending introduction of the carbon tax.

“The glass is less than half-full for the housing sector. Jobs are being lost and more (are) at risk,” Mr Jones said.

“The Reserve Bank must consider the very poor condition of the housing sector and cut interest rates further.

“If recent rate cuts fail to stimulate the industry the residential building industry is headed for a ‘perfect storm’.”

The bank’s chief economist, Craig James, followed this by suggesting it made sense that Australians – who are living in the largest homes in the world – had sought to better utilise their big dwellings.

“While we still have to dig through the results, presumably higher rents and mortgage repayments have resulted in more children staying home longer with their parents. At the same time, more seniors are probably also living with their children,” Mr James said.

A century ago, he said, there were almost five people living in the average home. Today there are just 2.63 people per dwelling.

“The increase in home use clearly has implications for the home building sector and residential real estate more broadly. If rents and mortgage repayments continue to outpace housing income, then the one-time lift in home usage may become more of a trend,” Mr James said.

“If Australia returns to the times when a number of generations sought to live in the one home, then clearly it will serve to restrain the demand for homes.”

For those who do decide to build, UDIA research has found that residential lot sizes have decreased by 22 per cent from the 585 square metre average of five years ago to 459sqm today.

The UDIA said lot sizes are declining in response to the limited supply and high cost of developable land in WA. Developers are responding to planning trends for increased densities in both infill and greenfield areas and are therefore maximising the number of dwellings in a typical broadacre development by providing smaller, more affordable products in new developments.

Ms Goostrey said findings from the Housing Industry Forecasting Group predicted dwelling commencements to increase by 11 per cent to 20,500 in 2012-13 on the back of renewed population growth, tight rental conditions and increased activity in the established market.