The distribution of Australia’s population has changed markedly over the past 55 years, driven by interstate and international migration. 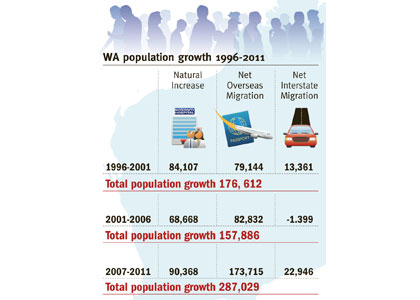 The distribution of Australia’s population has changed markedly over the past 55 years, driven by interstate and international migration.

The population debate in Australia has been dominated by the numbers.

The contradictions and simplification are unfortunate because the challenges and opportunities presented by population change in Australia over the next few decades are as much to do with population composition and ‘spatial distribution’ as they are about numbers.

This article focuses on the ‘spatial’ and argues that an important part of any sustainable population strategy for Australia must involve consideration of where the future population will live, how it will settled and policies which work toward achieving a better balance between the distribution of resources and population.

Australians are the most mobile society in the contemporary world. The 2006 census indicated that 16.8 per cent of Australians had moved their permanent place of residence in the past year and 45.5 per cent in the past five years.

Moreover, 23.9 per cent of the population was born in another country, the highest proportion for any middle-sized or large country.

In addition, at any one time there are almost 1 million foreigners in Australia on some form of temporary visa. About 1 million Australians reside abroad.

In the post-World War II period, there has been a shift away from the south-eastern states to the northern and western parts of the country.

This has been a function of structural change in the economy in the past 30 years, with the south-eastern states, heavily reliant on manufacturing, suffering substantial losses of jobs in this sector.

The dynamics of population change at the regional level are the result of the combined impact of three demographic processes:

• Net international migration to and from other countries.

While there are some differences between states and territories in fertility and mortality, most of the differences in population growth are a function of variations in internal and international migration.

For NSW, there has been a consistent pattern of net internal interstate migration loss. Over the period 1996–2009, 316,185 more people left NSW for other states than moved into it.

However, this was more than counterbalanced by the fact that 792,586 more people moved into the state from overseas than left to live in another country.

Net international migration to the state is now a greater component of growth than natural increase.

After NSW, which is overwhelmingly the major net migration loser in terms of interstate migration, South Australia has the second largest net loss (56,999).

In South Australia the net gain by overseas net migration in 1996–2001 was not enough to counterbalance the net interstate migration loss. However, since 2001 there has been a recovery of international migration to that state, with a net gain of 99,387 compared with a net interstate loss of 31,049 over that time.

Hence in that state, until recently, natural increase has been the major component in population growth (which was slow).

The pattern in Victoria is different again. After experiencing a small net interstate migration gain in 1996–2001, a small loss was recorded in 2001–06. However, international migration has increased substantially and has become larger than natural increase.

In Queensland, over the 1996–2006 period, net interstate migration gain was the largest contributor to population growth.

However, more recently international migration has had increasing significance in Queensland’s population growth, accounting for half of growth in the 2006–10 period.

It is interesting that since 2001 Queensland has not only been the fastest-growing state but for the first time the numerical increase in the state’s population has been greater than that in NSW.

International migration has been an important contributor to population growth throughout the entire post-war period in the state.

An interesting development of increasing immigrant settlement outside of major ‘gateway’ cities has occurred in recent years, not only in Australia but also in North America, Europe and New Zealand.

While in Australia much of this change has occurred in the past five years, the beginnings of change were apparent in the 2006 census.

In absolute numbers, the overseas-born population grew more outside the capitals than within the capitals during the 2001–06 period, so that there was a fall in the metropolitan share of those born overseas.

While this is a small difference, it represents a reversal of the trends of the previous half century, which were characterised by consistent increases in the proportion of immigrants settling in capital cities. The change is attributable to several factors:

• The introduction of the state specific and regional migration scheme that has a points assessment, with bonus points for skilled migrants settling outside of the main cities.

• The department of immigration and citizenship scheme for encouraging refugee-humanitarian settlers to move initially to regional areas.

• A trend throughout OECD countries for migrants to settle outside major cities.

Any realistic scenario of the population over the next two decades will see most people continue to live in the major cities.

Economies that flow from concentrations of investment, human capital, infrastructure, facilities and services will ensure that.

However, in a context of changing economic structure, climate change and ageing of the population, it is important to ask whether future spatial patterns of population growth will simply replicate those of the past two decades.

As others have pointed out, governments have tended to divide recurrent and infrastructure funding between regions on the basis of the number of existing residents.

As a result, areas of current or impending rapid growth frequently experience a lag in obtaining such funding.

• This is an edited extract from “Population distribution and internal migration”, by Professor Graeme Hugo, which appears in the CEDA-sponsored publication A Greater Australia: population, policies and governance. Professor Hugo is an ARC Australian Professorial Fellow, Professor of Geography, Environment and Population and Director of the Australian Population and Migration Research Centre at the University of Adelaide.