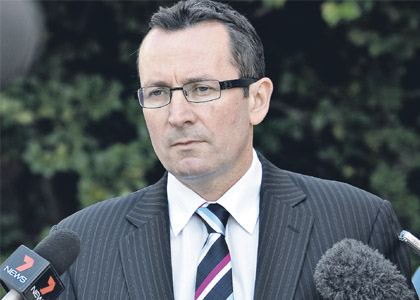 BUYER BEWARE: Mark McGowan has warned voters that Colin Barnett will step down as premier during his second term, if re-elected on Saturday, handing the reins over to Troy Buswell. Photo: Grant Currall

WITH opinion polls pointing to a re-elected Bamett government at Saturday’s state election, the opposition has sought to capitalise on concerns over the Liberal party’s leadership succession plans.

While Colin Barnett has pledged to serve a full-term as premier if re-elected, Labor has raised the spectre of Mr Barnett handing over the leadership to scandal-plagued Treasurer Troy Buswell within the next four years.

Opposition leader Mark McGowan used Labor’s official campaign launch this week to warn voters that the 62-year-old Mr Barnett had no intention of serving a full-term as premier.

“The fact is, Mr Barnett will retire during the next term if he’s elected,” he told the launch.

“Everyone knows it. Troy Buswell is being groomed to take over from Colin Barnett. We cannot let that happen.”

In an appearance on Sky News this week, Mr Barnett refused to speculate on whether Mr Buswell might one day return to the leadership, but said the treasurer should be judged on his ministerial performance rather than his personal indiscretions.

“He is popular among his colleagues and I think when opinion polls are taken and there might be a negative component, I just simply say to people go and watch Troy in a crowded room or making a speech, he’s a very, very competent person.”

The shock departure of former treasurer and attorney-general, Christian Porter, last year underscored a perceived lack of depth in the government’s ministerial ranks. Mr Porter was widely expected to be the next leader of the Liberal Party but instead chose to pursue a career in federal politics, opening the door for Mr Buswell to return as treasurer and as the most likely successor to Mr Barnett.

Mr Buswell, who also holds the transport and emergency services portfolios, has played a key role in the Liberals’ campaign, spruik-ing the government’s economic credentials and public transport plans.

Dr Hames, who holds the official position of understudy to Mr Barnett as deputy premier, has proved to be a strong performer but has flagged that he will retire at the end of the next term and is therefore unlikely to pursue the top job.

Police Minister Liza Harvey has been identified as a potential future leader but is a relative newcomer to politics, having served only one term in the state parliament.

Dr Nahan, an economist and former executive director of the Institute of Public Affairs, is believed to be well-regarded within the Liberal Party but will have big shoes to fill should he succeed Mr Moore, a veteran of state politics and a widely respected figure within the resources industry.

Dr Nahan will first have to see off a strong challenge for his seat of Riverton in Labor candidate Hannah Beazley, the daughter of former federal Labor leader Kim Beazley. While the altering of electoral boundaries has expanded Dr Nahan’s notional margin from 0.2 per cent following the 2008 election to 2 per cent, the battle for Riverton is expected to be competitive.

Labor is likely to have to deal with tensions of its own within the coming years, with treasury spokesman Ben Wyatt and deputy leader Roger Cook both known to hold leadership ambitions.