For all the political grandstanding over new rail or road projects, politicians need to remember it’s the taxpayers’ money they’re spending. 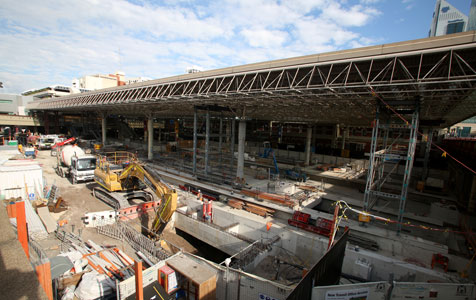 For all the political grandstanding over new rail or road projects, politicians need to remember it's the taxpayers' money they're spending.

There was no shortage of politicians on hand at Perth railway station when trains started using the new underground tunnels, marking a major stage in the $609 million City Link project.

Transport Minister Troy Buswell was there, of course, no doubt breathing a big sigh of relief that the six-day shutdown of the station, and the resulting disruption to suburban train services, had gone as smoothly as it did.

But with the whiff of an imminent federal election announcement in the air four other special guests, all with federal political links, joined in the celebration. Liberal candidate for Perth Darryl Moore was there, but he was the only representative from the conservative ranks.

Leading the Labor charge was the new Deputy Prime Minister and Infrastructure Minister Anthony Albanese, who flew across from Sydney. Defence Minister Stephen Smith, who doubles as the federal member for Perth, was there, as was the mayor of the City of Vincent, Alannah MacTiernan, who, coincidentally, is Labor’s endorsed candidate to replace Mr Smith in Perth.

Of course Ms MacTiernan is no stranger to rail projects herself, having overseen the construction of the Perth-Mandurah line as WA infrastructure minister.

All went according to plan. The sinking of part of the Perth-Fremantle line, which had been mooted at a news conference given by Tonkin government minister Colin Jamieson at a news conference I had attended as long ago as 1973, had finally been achieved, with minimal fuss.

According to one source, however, much work went on behind the scenes in the days leading up to the opening to ensure the historic occasion became a joint-government event. Initially, it was said, Mr Buswell would hold a solo news conference on the platform at the Perth station to mark the achievement.

Then the federal government said it would like to be involved; after all, it had contributed $236 million under its nation-building program. So the energetic Mr Albanese had to forgo a seat at the state of origin rugby league match in Sydney to ensure he was in Perth for the occasion.

And, as it was in the Perth electorate, Mr Smith was there. He also is acting as Ms MacTiernan’s campaign director, hence the Labor candidate’s presence, to balance the appearance of her main election opponent, Mr Moore.

The project has been the focus of continuing political interest. Only a month ago in one of her last acts as prime minister, Julia Gillard held a news conference at the station praising the project and stressing the federal government’s financial contribution.

State governments are always keen to get federal financial assistance for big capital works projects. Any support is gratefully received, although it sometimes gets downplayed at the official opening.

I recall the opening of the link road from Forrest Highway into Mandurah in 2010, when then special minister of state and member for Brand, Gary Gray, was hot under the collar about the state government media statement that gave little recognition to the Commonwealth contribution. He was preparing to make his displeasure public when state minister Simon O’Brien made the appropriate acknowledgment in his speech, and all was forgiven.

There was almost a repetition of the circumstances at the Perth underground event. Mr Buswell’s media statement did not mention the Commonwealth involvement until paragraph 16, along with the City of Perth’s connection. But the federal grant was also acknowledged in the ‘fact file’.

Mr Albanese’s statement was more revealing, noting in the second paragraph that he had joined with Mr Buswell to “celebrate this significant milestone”.

But he could not resist a political dig, adding: “Importantly this visionary project is part of federal Labor’s historic investment in urban public transport infrastructure around the country. We’ve already committed more federal dollars to such projects than all our predecessors since Federation combined.”

Mr Albanese noted the refusal of the federal Liberals to support funding for metropolitan rail projects. The Liberals have said they will contribute to roads, but that rail is a clear state responsibility.

The completion of the new tunnel is not the end of the project. The next stage involves the demolition of the Wellington Street bus station, which was built in the mid 1970s, and its replacement with a new underground station, and a new pedestrian underpass.

No doubt there will be plenty of politicians – and political aspirants – on hand at the opening of those projects. Just how many will depend on the proximity of the next federal and state elections. Hopefully the ministers will be upfront in acknowledging the contribution of other levels of government, even if they are political opponents.

After all it’s taxpayers’ money, not theirs.