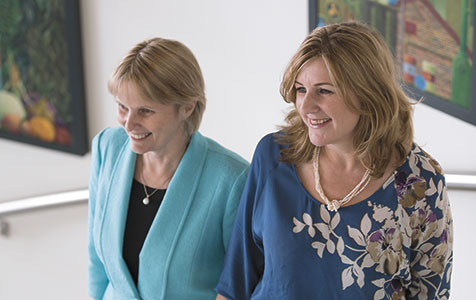 DOWN TO BUSINESS: Tracey Horton (right) and Deidre Willmott bring complimentary skills and commercial experience to their roles at CCI. Photo: Attila Csaszar

In a year during which the debate about the lack of women in leadership roles has intensified, few appear to have noticed the revolutionary change at the top of the state’s peak business lobby group.

Without fanfare, one of the country’s most prominent and well-resourced business associations, the Chamber of Commerce and Industry of Western Australia, has emerged with a female duo at its helm.

President Tracey Horton, who stepped up to the role late last year, and chief executive Deidre Willmott, who took command in early March, make a formidable team whose reach goes right to the top of business and politics in WA.

Ms Horton said there was no agenda behind having two women at the head of CCI, with the appointments merely the result of a process that looked for the right people to fill the roles.

Ms Horton believes she and Ms Willmott have complementary skills and ought to make a strong team.

“I think (we both) bring things to the roles that are different and make us more effective,” she said.

“It is refreshing to see two women as that CCI team, and Kate Carnell as CEO of ACCI (Australian Chamber of Commerce and Industry), but really it is about what we as individuals bring to the role.”

As Ms Horton suggests, their very public work histories reveal different, partly overlapping skill sets that appear to fit their individual roles at the head of the governance and executive structures of CCI.

Ms Horton is an economist by training, starting out at the Reserve Bank of Australia before joining global management consultancy Bain & Company and then returning to Perth with local boutique advisory and consulting firm Poynton and Partners.

Her last big career move was into academia where she was dean of the University of Western Australia’s Business School, overseeing big structural change, expansion and a fund raising effort that led to its new home at the southern end of the campus.

These days she is a non-executive director at leading listed firms Automotive Holdings Group and Navitas.

Ms Willmott, by contrast, has been mainly in the political space during the past two decades. She was chief-of-staff to former premier Richard Court in his final term before leaving Perth for three years to assist with the running of Melbourne’s Commonwealth Games, returning in 2006 to take a full-time policy role with CCI.

After famously, and graciously, stepping aside as the pre-selected candidate for the seat of Cottesloe so that then-opposition leader Colin Barnett could unwind his retirement plans, Ms Willmott became his chief of staff when he took the reins of government as premier in 2008.

She then went into industry as an adviser in government affairs, both internally at Fortescue Metals Group and, externally, with consulting house Purple Communications.

Ms Willmott cites this recent experience in industry as hugely beneficial when it comes to her role of championing business causes.

Yet it is the similarities between the two women that appear even more striking when you consider the different pathways to success they took.

Both have raised families that are now all but off their hands; they each have husbands who are very successful in their own right (Jonathan Horton, NWQ Capital Management, and Michael Lishman, Clifford Chance); they even sit on the boards of different leading private girls schools (PLC and St Hilda’s).

Perhaps more importantly for those who look to CCI for leadership, both Ms Horton and Ms Willmott admit to being policy wonks.

Both have plenty to do with it in their careers, and both have been drawn to CCI prior to their current roles by the chance to get involved with policy and influence outcomes.

“For me I think it is really important that business promotes the role it has in the community,” Ms Willmott told Business News.

“Without business and its employees paying taxes we would have no government or government services.”

She said business provided the everyday experiences –from the coffee we buy in the morning to the television we watch at night. To offer new and richer experiences business needs to operate without unnecessary constraints.

“If we want new ideas and creativity we need to look at the framework we operate in and is it possible to do things in a more cost effective and efficient way,” Ms Willmott said.