Our transport feature analyses road, rail and port projects underway and other projects on hold as the state seeks to tackle the mounting congestion challenges facing commuters and industry. 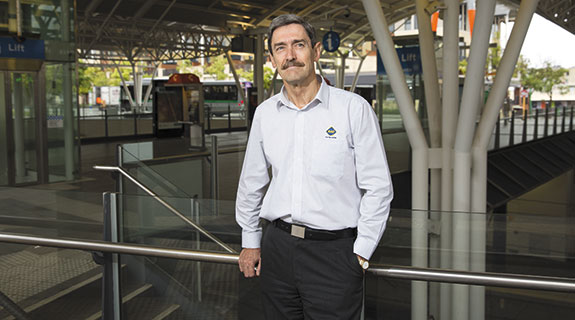 Our transport feature analyses road, rail and port projects underway and other projects on hold, as the state seeks to tackle the mounting congestion challenges facing commuters and industry.

Also in this week's special report:

A possible resolution to the Tier 3 debate

The future of the Fremantle outer harbour

Wasting time in traffic is becoming a major problem for Perth motorists, but there doesn’t seem to be a clear plan to reduce the gridlock.

Congestion remains the big urban issue for policymakers in Perth, where the population hit 2 million last month, but observers are wondering what is being done about it amid predictions the number of residents is likely to more than double in just 35 years.

This week, a report by demographer Bernard Salt based on Australian Bureau of Statistics data showed that Perth’s population was estimated to rise to more than 4.6 million by 2050, bumping Brisbane as the country’s third-largest city.

While that news might elicit groans from Perth residents already seeking to cope with crowded roads and packed trains, attractions such as lifestyle and the relatively steady Western Australian economy provided by resources are likely to keep attracting people, albeit not necessarily at the pace of the past decade.

Importantly, the consequences of congestion are a lot more than inconvenience for commuters – a 2007 federal government report estimated that by 2020, gridlock in Perth could cost the WA economy $2.1 billion.

Motoring organisation RAC of WA backs spending on public transport. It is critical of the shift from the visionary planning that set the Perth development agenda in the middle of past century to the short-term thinking of 2015, which has led to the state government dropping the ball on infrastructure already vital to meet current demand, let alone future needs.

RAC group chief executive Terry Agnew said the state government launched a draft Public Transport for Perth in 2013 plan and talked about a Moving People Network Plan, neither of which appears to have progressed.

In 2011, when the draft public transport plan was launched, the government suggested that more than $4 billion would be required for public transport network and fleet expansion until 2031, and that annual operating costs will have almost doubled from $690 million to $1.2 billion in 2010-dollar terms.

However instead of progress on these broader plans, the state government has launched various piecemeal solutions, only to then put some on the back burner as costs rose or political will waned.

Some of those solutions that are either under way or soon to commence include: widening both the Mitchell and Kwinana freeways at key choke points; the Gateway WA project around Perth Airport; the upcoming Perth Freight Link; and the $2 billion Forrestfield-Airport rail link.

But Mr Agnew said even with those upgrades, Perth still had a clear infrastructure gap.

“That gap will only widen, all projections show that,” Mr Agnew told Business News.

“If you don’t have these long-range plans how do you get any investment?

“As a result you run the risk of being reactive and short-term.”

Mr Agnew said RAC had watched the issue of congestion and infrastructure development closely, even working with the state government on ways to use technology to better coordinate traffic signals and improve flow.

He said the group was still working through auditor-general Colin Murphy’s recent report, which criticised state spending on main roads for not focusing on data that showed its efforts were relieving congestion.

While the report was a largely positive critique of Main Roads WA’s performance, it also underlined there was no clear plan forward to deal with congestion issues.

The report showed that neither the Department of Transport nor Main Roads had set objectives or performance targets to manage congestion, while Main Roads also doesn’t actually know if its road upgrade programs improve the issues.

However, Main Roads did develop a Traffic Congestion Management Strategy in 2013, identifying 49 projects and initiatives to address congestion, but the auditor-general said it was not clear how those were selected or prioritised.

“One thing that initially hit us was this whole question of coordination across departments,” Mr Agnew said.

“That goes back, again, to ‘where is the blueprint’?

“There is not a lot in the past five decades that lays out that sort of blueprint.

“Are Main Roads doing that? According to the auditor-general’s report they are, but it is part of the issue that there is not grand plan that they can hook their decisions back to.”

While the RAC wants to see a long-term plan, it also believes there are immediate requirements, with the shelved light rail line proposed from the CBD to Mirrabooka a project that ought to be restarted as a priority.

In fact, apart from a few items, including spending on cycleways, the RAC matches its rhetoric on the bigger picture by avoiding too much project-by-project analysis.

It wants to see the current transport network better utilised by technology that offers a great deal more bang for the buck across the whole of Perth.

The RAC also wants to see the federal government give back more to the state in funds it extracts from WA motorists.

In a call reminiscent of the current GST debate, the RAC claims just 41 cents in every dollar paid in motoring taxes such as the fuel excise are returned to WA. The rest is spent on east coast projects, mainly roads.

Aside from the Mitchell and Kwinana freeways, one of the bigger choke points in Perth is around Fremantle Port, as well as the major roads that feed into it.

About 2,600 trucks access Fremantle Port each day, with delays due to congestion becoming a serious issue around Stirling Bridge and Tydeman Road, particularly in peak hour.

Improving access to the port is a clear priority of the state government, through the Perth Freight Link – a $1.6 billion upgrade to Roe Highway, Stock Road, Leach Highway and Stirling Highway.

The road has been flagged to become Perth’s first toll road, although only heavy vehicle users will be charged to use it.

But Mr Agnew said he was wary of the introduction of toll roads in WA without a ground-up approach to way roads are funded, to ensure the cost was equitable and its use as a price signal was effective.

“Otherwise it is just another tax,” he said.

“It needs to start with ‘what is the model’?”

Notwithstanding the toll debate, Fremantle Mayor Brad Pettitt said the project, which has been facilitated by $925 million in federal government funding, would do little to address congestion issues. Mr Pettitt said it was fair to say the Perth Freight Link was a project that took all the key stakeholders largely by surprise.

“We’ve always supported having some upgrades to that road, that certainly has to occur, but the level of upgrade where we’re actually creating a freeway-style road though Roe Highway, almost to the port, is one that has never actually been entertained at any level of government before,” Mr Pettitt told Business News.

“It’s extraordinarily expensive but it doesn’t integrate rail and doesn’t actually reach the port; it’s a road that goes three quarters of the way to the port and then stops.

“It merely means trucks can drive faster until they get to the bridge, but they will get stuck on the same bridge. “

Mr Pettitt said the Perth Freight Link was a prime example of how policy responses to congestion were missing the mark, largely because they were narrowly focused on roads instead of an integrated transport strategy.

He said the City of Fremantle was committed to keeping the port as a working port, but access issues needed to be addressed by putting more freight on rail, rather than roads.

“At the moment, the only way to get freight out of the port (on rail) is over the passenger rail line,” Mr Pettitt said.

“That has to be shared with passenger rail, so that means freight can’t run during the day most of the time because the gaps between the passenger trains aren’t long enough.

“Then it runs through the west end of Fremantle and down past South Beach, using some very nice coastal land.

“That’s no longer the optimum route for freight on rail, and it should be looked at as part of an integrated transport plan, but there’s been none of that.

“It’s simply a road project … all building bigger roads does is defer congestion a couple of years into the future at great expense.

“The only way you can support this road as a good investment of public funds is if it was actually part of an integrated transport plan that included rail.”

Another key plank of a whole-of-network approach to tackling the city’s congestion conundrum, according to Committee for Perth chief executive Marion Fulker, is the recently shelved light rail network.

The state government is examining the possibility of providing a link to Mirrabooka through a rapid bus network, but a recent Committee for Perth research report revealed light rail would not only provide more of a financial benefit, it would also be more efficient at moving people.

The report predicted that, by 2031, the percentage of commuters travelling to the city using public transport would increase from 47 per cent to nearly 70 per cent.

Ms Fulker said buses would not attract enough commuters to bridge that gap, while they also would not have the knock-on effects to reduce congestion that building a light rail network would.

“Light rail is not just a mobility solution, it also starts to facilitate density around appropriate locations,” Ms Fulker said.

“Developers take their cue from the government.

“The government puts the infrastructure in the ground and developers know that’s where the opportunity is. A bus system is not going to produce that.”

The City of Fremantle also recently floated its own plans for a light rail network, to link the port city more closely with the Cockburn Coast, Murdoch and Cockburn Central.

But Mr Pettitt said the launch of that proposal earlier this year had prompted no response from the state government.

“We’ve been pragmatic in knowing that, given that MAX had been shelved, this project wasn’t going to happen soon,” he said.

“But we realise that good transport planning is about mapping out your transport routes for decades ahead, so when the political and the funding sources align that you’re ready to go and you can do these projects.

“Having light rail running to the south and east of us is essential for Fremantle’s future, and it will happen.

“It’s just a question of when rather than if, and that’s why it is important that we made it really clear that it is one of the council’s key strategic priorities going forward.”