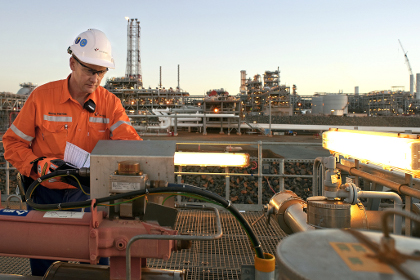 Woodside Petroleum's first half profit has fallen slightly because of the costs of starting up its massive Pluto liquefied natural gas project, which will remain at current capacity after a failed exploration program.

Woodside's net profit of $US812 million ($A777 million) in the six months to June 30 was down from $US828 million in the previous corresponding period.

Underlying net profit, which excludes one-off costs associated with Pluto, was $US865 million ($A828 million) in the six months to June, up from $US828 million in the previous corresponding period.

Woodside owns a 90 per cent stake in Pluto, which was commissioned in March this year.

The company said exploration drilling at Pluto had failed to uncover enough commercial gas to bring on a final investment decision for its expansion.

"Nonetheless, discussions with other resource owners regarding potential Pluto expansion are active and are expected to continue through 2013," Woodside chief executive Peter Coleman said in a statement.

The Pluto project ran at 80 per cent of capacity in its first months of operation, above the forecast 36 per cent, Woodside said.

Higher than expected production at Pluto was behind Woodside's recent increase to its full year production target, to a range of 77 to 83 million barrels of oil equivalent.

Woodside declared a fully-franked final dividend of 65 US cents per share, up from 55 US cents for the same period in the previous year.