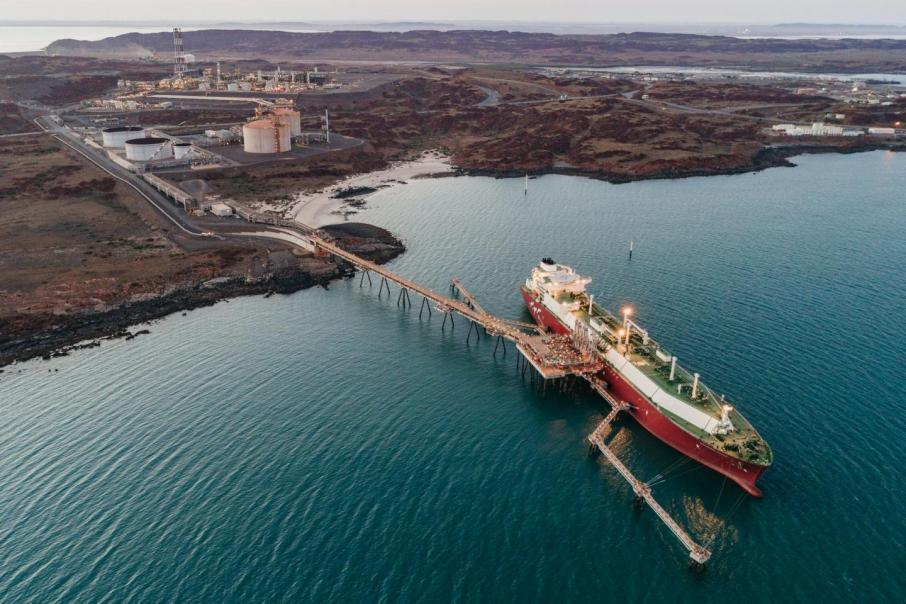 An LNG carrier at the Pluto LNG plant on the Burrup Peninsula. Photo: Woodside

Construction of a new train would have a capital cost 30 per cent lower across the project’s life than using the growing excess capacity at North West Shelf Venture’s Karratha plant, Woodside said at an investor briefing today.

Analysts including Credit Suisse recently argued Woodside was trying to talk down the value of the Karratha Gas Plant during potential sale negotiations, using the Pluto option as leverage.

The Karratha plant was not designed to process gas of Scarborough’s composition, executive vice-president development and marketing Meg O'Neill said.

“The gas we produce at the North West Shelf is a very rich gas,” she said.

“The Scarborough gas in contrast is extremely dry, we’d need to make very extensive modifications to the Karratha gas plant.

“Blending can get you part of the way there but it can't get you the full quantity.

“[Karratha] has five trains, the oldest trains more than 30 years old … we’d need to make modifications to handle very dry gas and then expect to see continued investment to process those large volumes of dry gas for a very long period of time.”

A final investment decision on Scarborough is due in the second half of 2021.

Ms O’Neill said changing course to focus on the Karratha option would also delay development by a couple of years and potentially put heads of agreement for offtake at risk.

She said Woodside forecast a delivered cost of $US6.80 per million British Thermal Units into Asia, which Ms O’Neill said would be more competitive than US Gulf Coast projects.

The company has also shifted strategy from selling down its stake in Scarborough to putting a 50 per cent share of the new Pluto train on the market.

Those reductions are of the company's equity share of emissions, not total from the operations.

There’s potential to store 3.4 gigatonnes of carbon dioxide off the WA coast in reservoirs after they are exploited for oil and gas.

Those are led by the North West Shelf Venture’s fields, with potential to store 1.7 gigatonnes of carbon dioxide.

That’s more than three times Australia’s emissions in the year to March 2020.

Mr Ridsdill-Smith said the cost for carbon storage had historically been above $US100 per tonne, and was about $US80 today.

Woodside would target $US50 per tonne, he said.

Carbon offsets could become a business in its own right, Woodside said.

In a reserach note last month, Credit Suisse said Woodside management appear to be talking down to the value of North West Shelf Venture, where it is operator and holds 16.7 per cent.

The company today did not rule in or out buying the 16.7 per cent slice of the venture put up for sale by Chevron.

"Decline is imminent, and management have provided little line of sight to its life extension beyond some modest toll deals and are ready to acknowledge train shutdown scenarios," Credit Suisse analyst Saul Kavonic said.

"We believe [Woodside] is deliberately conveying this downbeat message to put downward pressure on the price tag of any NWS asset stake sales by other JV partners (Chevron and likely others), as this will aid Woodside ultimately buying the stakes more cheaply.

"But in the interim, equity markets can take the downbeat message to heart."

"We see Woodside’s narrative discounting this scenario’s likelihood as market messaging to push down the NWSV stake price tag and accelerate NWSV stake sales to Woodside's benefit," the statement said.