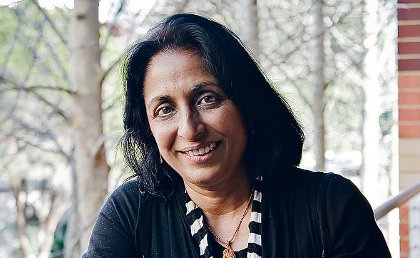 THE motivations for some partnerships between the not-for-profit and corporate sector are not always immediately apparent; but in the case of Curtin University and Autism West, there’s no mistaking the connection.

The Toby Playpad is a new early learning tool designed as an iPad application for children on the autism spectrum being developed by Svetha Venkatesh, Stewart Greenhill and Dinh Phung, who are professors at Curtin University’s Institute of Multi Sensor Processing & Content Analysis. Funding is courtesy of an Australian Research Council grant and from partner, Autism West.

Both Autism West and the team at Curtin are motivated by the passion for developing early intervention and diverse therapies for autism.

Their common mission, in this case, is to lessen the burden for families with children on the autism spectrum.

Professor Venkatesh was first exposed to the impacts autism can have through a colleague, the inspiration for the Toby Playpad.

“It was my first experience with autism, and I was watching this family struggle with this child, trying to get the therapy and the problems with the therapy. That’s when I thought we could actually do something to help these parents,” she said.

Professor Venkatesh applied for and won a $600,000 Australian Research Council grant, which came with a clause – a funding partner was required to provide an additional $240,000 in order for the grant to be bankable.

After approaching corporate and private donors, Professor Venkatesh was stumped; she struggled to find an interested party and was on the verge of giving up when Autism West came into the frame.

She said the not-for-profit organisation was immediately supportive of the idea, and even though it was not a funding body, agreed to be the funding partner.

“The commitment that Autism West has is just inspiring, it has inspired us all,” Professor Venkatesh told WA Business News.

Autism West president Silvana Gaglia said when Professor Venkatesh approached the organisation it was obvious the project was the perfect fit.

She said Autism West’s board instantly understood the value of the tool, given its ease of use and attraction for children due to its digital nature, recording and performance-based tracking capacity and the extensive learning program with different learning stages catered for.

“I am a mother of a child with autism, classic autism, and I have been through the therapy mill, if you want to call it that,” Ms Gaglia said, referring to more traditional therapy methods like Applied Behaviour Analysis (ABA), which require constant updating of hard copy exercise material.

She said the board members understood the impacts this therapy schedule could have on a family, and Autism West’s specialist therapists were able to aid in the development of the learning program, while the Curtin team developed the technology to support it.

Autism West has committed to funding the project at $80,000 each year for three years and still has more than half of this amount to go, but Ms Gaglia has no doubt the funds will be available.

“It was a real no brainer. Autism West saw this as something that will help the community not just in WA but we saw the potential for this to reach out to families probably all over the world,” she said.

“This is all about what we stand for, to enrich the lives of families with autism and it fitted beautifully into that brief.”

Two trials of the playpad, which won the 2011 Curtin Commercial Innovation Award, have already taken place, with a third scheduled for October and Professor Venkatesh said she hoped the application would be launched in February 2012 in WA and available through the Apple store in April.