Play fighting over as campaign begins 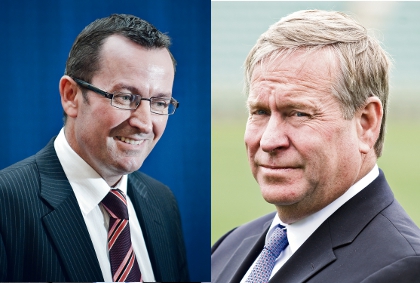 After a month of unofficial canvassing, the state election campaign formally kicked off today, with the Liberal party looking to shore up its position on law and order and Labor continuing to spruik its public transport solution.

Mr Barnett's first pledge to voters was a proposal to hand mandatory jail terms to burglars who seriously hurt or sexually assault residents while thieving.

If the party wins the March 9 poll and the bill passes, it will represent the nation's toughest laws for violent home invasions.

Mr Barnett said overall crime had fallen by nine per cent, but burglary had gone up, so existing deterrents were not working.

"Every person in Western Australia has a right to feel safe in their home and hopefully this legislation will deliver that," he told reporters on Wednesday.

Under the proposal, an adult offender who breaks into a house and violently rapes a resident will face a minimum of 15 years imprisonment.

An adult burglar who seriously physically assaults a resident will face at least seven years and six months in jail.

And adult burglars who indecently assault a resident will be put behind bars for at least three years and nine months.

For juveniles aged 16 and above who commit serious physical or sexually violent offences during a home invasion, the minimum period of detention will be three years.

In addition, Police Minister Liza Harvey said loopholes in the "three strikes" burglary laws, introduced in 1996, would be closed.

The challenger said Labor would provide more than 5,000 additional car parking bays along public transport routes in its first term of government if elected.

“We will include a number of super car parks at some of the outer metropolitan stations with up to 2,000 bays, including the new Atwell Station.

“For the first time, we will trial satellite car parks based away from train stations with regular bus feeder services direct to the stations.

Mr McGowan also pledged to resign from his post if an airport rail link is not under construction in the first term of a newly-elected Labor state government.

"It will be underway in the first term of a WA Labor government and I would resign if it wasn't underway," he told ABC radio.

"I've said it will be constructed by 2018. That is our expectation."

The Metronet project would include a 10.5km rail line to Perth's international airport - and would serve domestic terminals when they are relocated to adjacent land in coming years - at an estimated cost of $731.5 million, not including rail cars.

The line to the airport would include new rail stations in the eastern suburbs of Redcliffe and Forrestfield/High Wycombe.

The polls say Mr Barnett is Black Caviar to opposition leader Mark McGowan's Black Beauty - with the Liberal Party at odds of $1.10 to win, compared to Labor's $4.85 with the bookmakers.

But the pure numbers say that if maverick Green turned independent MP Adele Carles loses her seat in Fremantle to Labor as expected, then they only need to gain two more lower house seats to form a government.

Searching for the campaign's iconic image, Labor has gone as far as having baby clothes made - bearing the colourful London Underground-style map it hopes will shift voters as well as commuters.

And with five major Metronet elements already revealed, Labor could claim the early momentum in a campaign where only one side has been in election mode.

Not that it's stopped Premier Barnett or his ministers getting around the state with a few big cheques.

A promised $70 million will upgrade Perth's beaches, with other pledges including free public transport for carers, $300,000 for the safety of rock fishermen in Albany - which has a majority of 0.2 per cent - and $36 million for LED speed signs in all school zones.

But with the Labor slogan of a campaign about priorities ringing in their ears, the Liberals have kept their priority policies well hidden.

Transport is shaping to be one, education another, and law and order a third.

The Liberal's governmental ally, the Nationals, have been quiet, perhaps because state leader Brendon Grylls faces a political prize-fight in the Pilbara after choosing to move from his safe Central Wheatbelt seat.

Mr Grylls will also not be a part of the televised debate due to take place between the two party leaders on February 19 - the only head-to-head contest Mr Barnett has agreed to take part in throughout the campaign.

Mr McGowan, however, is scheduled to appear in two more in the following fortnight, but with his opponent yet to be announced, he may be left debating himself.

Whether anyone has been listening will be revealed on March 9.