Planning reforms put WA at #2 with a bullet 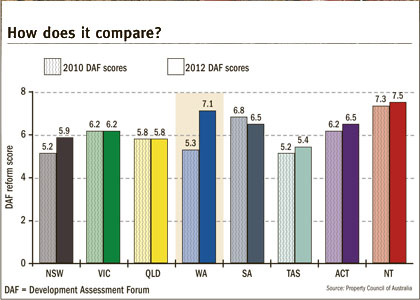 WESTERN Australia has been singled out as a ‘shining light’ for reforms made to its planning assessment system, but the industry believes there’s room for further improvement.

The Property Council of Australia has released its Development Assessment Report Card 2012, which rates the effectiveness of development approval processes across the country.

WA has moved up the ranks from the sixth place ranking, gained in 2010, to second place behind the Northern Territory.

The scores are determined by rating each state on how it implemented 10 key principles including policy development, notifications, and private-sector involvement.

The report says WA has made significant improvements since 2010 through the introduction of planning assessment panels, updates to the residential design code and advancement of regional and metropolitan strategies.

“The state was found ‘asleep at the wheel’ last time round but has improved its standing considerably through a solid reform program,” the report states.

Despite coming in behind the NT overall, WA was found to have the best system structure in the country in terms of simplicity, and was also rated the best for ‘commercial acumen’, a measure that rates the system’s speed of response.

It did, however, receive a low score of only two in regards to the level of private sector involvement.

“It was just over two years ago that we initiated this agenda designed to cut red tape and ensure a transparent, consistent and efficient system,” he said.

The introduction of nine regional development assessment panels and six metropolitan panels had transferred decisions on major projects from the hands of local government to a panel of experts – a change Property Council of Australia WA chief executive Joe Lenzo said had reduced the time taken for approvals to be granted.

“In the past what was happening was for large projects, developers were being hamstrung by the inability of local government and the elected members to make a decision; the time taken was excessively long,” he said.

Mr Lenzo said new laws concerning apartment applications had made it simpler for developers to gain approvals and the introduction of private certification for building projects – which comes into effect at the start of April – would also make the process faster.

“The general feeling about the approval process (before the reforms) was that it was cumbersome, it had huge delays, it took a long time and it really needed to be streamlined,” he said.

Developers had reported timeframes of between six months and two years to get larger projects underway, which resulted in significant holding costs.

Mr Lenzo said the time taken to get approvals had already halved on average, although he acknowledged it was still early days.

He warned that only a handful of projects had been approved through the new processes, so the true practical effect was still to be evaluated.

“If we get a couple of other things that are in the pipeline at the moment legislated and working well, we could have the best planning system in Australia,” Mr Lenzo said.

The report says the introduction of new residential codes – including for multiple dwellings in November 2010 – has been positive and they were well practised and understood. However, it wanted the state to also introduce similar codes for non-residential dwellings.

It also states WA showed the most promise with the establishment of the Metropolitan Redevelopment Authority, which replaced the replaced the Midland, Armadale, East Perth and Subiaco redevelopment authorities.

If the state continued to improve its processes it was expected to reach a potential overall score of eight in the council’s next report.

It was also recognised that WA faced difficulties in that it had the broadest array of plans and strategies at local, regional and state levels, but it had still been long praised for the simplicity and directness of its planning development processes. The property council advised the state to concentrate on bringing separate local council strategies into line, as they remained disparate with many councils using old-style planning schemes.