How has the state government’s streamlined development assessment pathway performed in the year since its establishment? 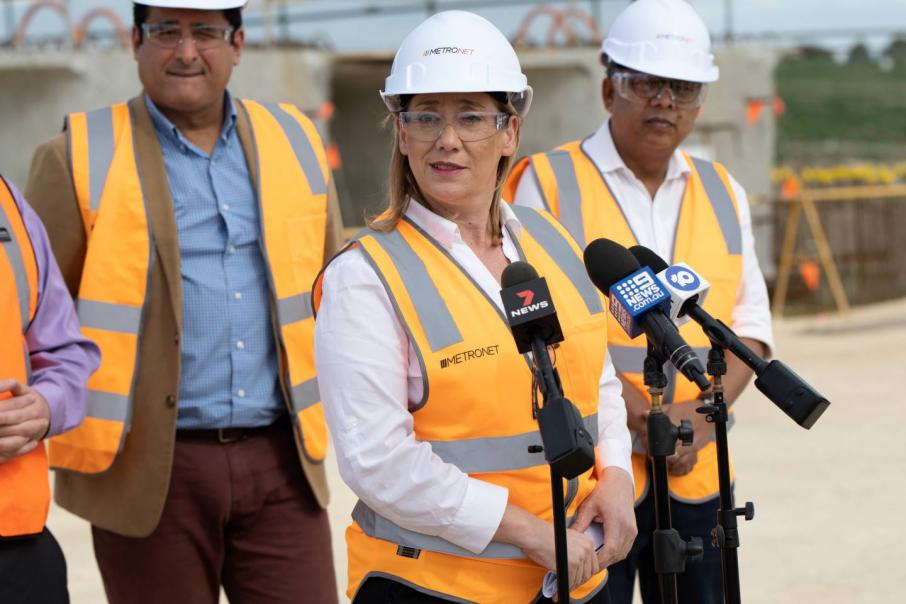 The state government’s move last year to establish a streamlined development pathway was welcomed by the property industry, which had long advocated for an improved approvals process.

In the months after COVID-19 reached Australia, the state government negotiated historic planning reforms to expedite development projects and create a pipeline of construction jobs to stimulate the economy.

Among the suite of initiatives was the establishment of the State Development Assessment Unit (SDAU), with the Western Australian Planning Commission (WAPC) granted temporary decision-making powers to determine significant shovel-ready developments (rather than local governments and joint development assessment panels).

The new process was gazetted in July 2020, with project eligibility based on scale and potential job creation.

Minimum thresholds were set at $20 million for metropolitan projects and $5 million for regional projects.

Since its inception, the SDAU has received more than 70 development applications and approved 11 projects worth more than $350 million. And while it has proved its efficacy at somewhat streamlining the process – with all projects reaching WAPC determination receiving approval – it has been criticised by local bodies.

Of the 10 property-related projects to be determined by the SDAU so far, more than half have received recommendations for refusal by the local council (see table). 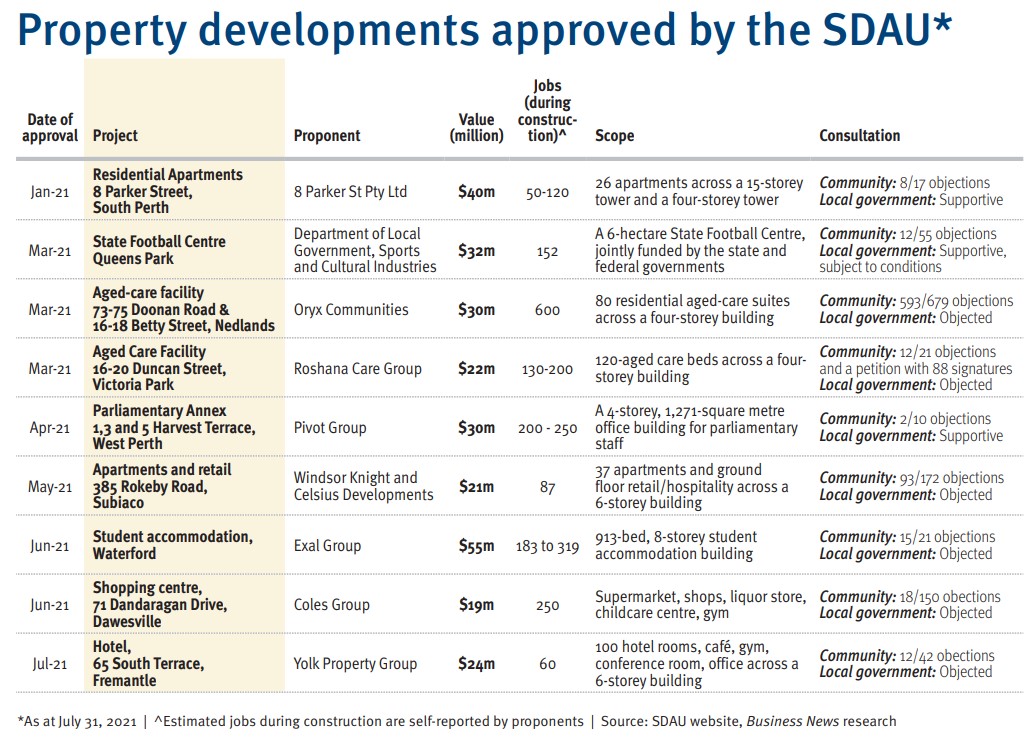 Concerns over height, bulk, and scale have been the major sources of contention.

However, Urban Development Institute of Australia WA chief executive Tanya Steinbeck insisted that was not a reflection on the SDAU process itself, but rather outdated local planning schemes.

“On many occasions, local governments have failed to ensure their local planning schemes and associated policies are up to date, Ms Steinbeck told Business News.

“They have failed to review their schemes on a regular basis, and this causes uncertainty and a lack of clarity around the future development of certain areas and the vision for the community.

“The SDAU process ensures developments are not caught up in a process that can involve uncertainty and a lack of clarity around what is or is not acceptable in the context of an agreed and publicised vision for a local area.

“All too often, local councillors are influenced by a minority of community members who might have the loudest voice,” Ms Steinbeck said.

“The SDAU process ensures a project is assessed on its merits, based on facts and current regulation and policy along with a broad understanding of community needs and expectations.”

While the SDAU pathway is due to close to applications from January next year, it could provide valuable lessons for the establishment of a new decision-making body, the Special Matters Development Assessment Panel.

“It is unfortunate that, in aiming to coordinate the process and ensure better outcomes for the community, the [SDAU] process has been misconstrued as a way to somehow avoid public scrutiny,” Ms Steinbeck said.

“Given the process still requires public consultation, and many developers conduct their own upfront consultation as part of their groundwork, the SDAU process will not somehow undermine any statutory requirements.”

Not all industry stakeholders have been as supportive of the new process.

The SDAU was met with staunch opposition from the WA Local Government Association (WALGA), which raised concerns about the planning commission’s enhanced powers and ability to set aside council planning policies informed by community feedback.

Under the SDAU, the WAPC is not bound by any planning or non-planning law – Environmental Protection Authority criteria aside – when determining SDAU applications.

However, the WAPC must still consider public submissions and be satisfied that developments would be consistent with orderly and proper planning.

One year on from SDAU’s introduction, WALGA’s position hasn’t changed, standing by its belief the process has effectively allowed local planning controls to be ignored.

WALGA president Tracey Roberts told Business News while WALGA understood the pathway was established in response to COVID, there was no evidence to suggest the existing development assessment panel (DAP) system was incapable of meeting those needs.

As at the end of July 2021, the SDAU had approved 11 applications, while WALGA said the existing DAP system had considered more than 200 applications worth a combined $10.5 billion.

According to WALGA data, DAP applications took an average of 125 days to determine, while it claims proposals under the SDAU were taking between four and five months.

Ms Roberts indicated WALGA would strongly advocate against the retention of the SDAU.

More than half of the property-related development applications approved by the SDAU were recommended for refusal by their respective local governments on the basis they did not comply with the local planning scheme.

Among the most contentious was Oryx Communities’ $30 million aged care facility in Nedlands, approved in March despite the City of Nedlands council recommending its refusal.

The development was touted as a significant employment opportunity, with Oryx estimating it would create 600 jobs during construction and 100 full-time jobs once operational.

But almost 600 residents lodged submissions objecting to the proposal, citing concerns over its height, size, and potential impact on traffic.

The WAPC meeting agenda detailed residents’ concerns of a lack of community engagement, and that the process had been used as a means of bypassing local planning pathways.

The City of Subiaco recommended the proposal be refused because it conflicted with the city’s town planning scheme and draft plan for the precinct, which stipulated a maximum height of four storeys.

Subiaco planning officers questioned whether the development should be considered by the SDAU at all and said the economic benefits of the estimated 87 jobs during construction did not outweigh the need for careful design.

Another project deemed to not meet local planning guidelines was the $55 million Waterford Purpose-Built Student Accommodation, an eight-storey facility to house more than 900 students.

The City of South Perth said it could not recommend the project for approval as it did not meet the building height requirements and constituted an overdevelopment of the site.

Similarly, Yolk Property Group’s $24 million Fremantle hotel received the go-ahead last month, despite the City of Fremantle’s push for it to be refused because it exceeded the height limit by 13 metres.

Perhaps the most contentious of SDAU applications so far has been Gary Dempsey Development’s apartment building along Cottesloe’s popular beachfront strip.

Since the application was lodged in December 2020, the SDAU has sent the developer back to the drawing board twice, largely over bulk and scale, reducing height from an initial 33.7 metres to 24.9 metres at the building’s tallest point.

Those latest plans still exceed the 21-metre height limit, however, the SDAU officers decided it was permissible and recommended the project for approval.

The Town of Cottesloe is still refining its future vision for the area via its local planning strategy and said it was not included in consultation for the third iteration of plans.

Despite several redesigns, Mr Dempsey has remained positive about the SDAU and dismissed claims it was a shortcut or an easier process.

“It is certainly far from a cheap or fast-track process from a developer’s perspective, nor is it a guarantee of approval,” Mr Dempsey told Business News.

“From our own perspective, our project went through three rounds of significant design revisions, two rounds of extensive public advertising and assessment by a range of industry and affiliated experts, community members and others to ensure it underwent the same scrutiny, if not more, as it would through the local government process.”

Planning Minister Rita Saffioti similarly rejects the notion the process allowed developers to bypass local governments, highlighting the proposals were still subject to community consultation and the stringent criteria set by the Department of Planning, Lands and Heritage and the Environmental Protection Authority.

“Without new projects, like these approved significant developments, thousands of workers in the construction industry would face uncertainty and potential job losses,” Ms Saffioti said.