Planning for a first-rate retirement

Long-term low interest rates have added further complexity to the issue of superannuation and the aged pension. 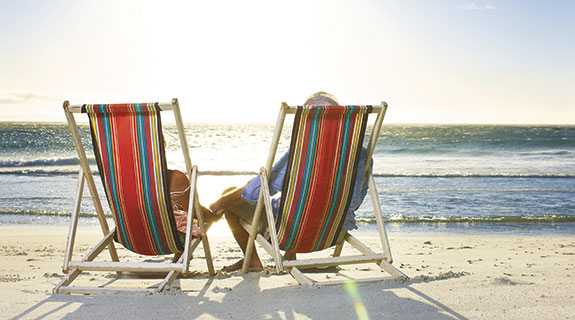 HAPPY DAYS: A lucky few are able to retire with plenty to spare. Photo: iStockphoto

Long-term low interest rates have added further complexity to the issue of superannuation and the aged pension.

WHO is rich and what level of wealth makes you so is a question that affects more people than you might imagine; clearly the implications of the term are different for retirees, those soon to retire, and even the young, who are definitely not rich and not even thinking about retirement.

Government, too, is starting to worry about the ‘rich’ question because of the way it could distort its budget and significantly affect the superannuation system (and even the structure of the workforce).

Reserve Bank of Australia governor Glenn Stevens touched on the personal wealth question a few days ago when speaking at a banking conference in Sydney, noting that people close to retirement faced a grim outlook even if they had built-up what was once regarded as a substantial superannuation balance.

Just how grim can be seen in this simple test of what it means to have $1 million as your retirement nest egg. A few years ago, when you could safely earn 7.5 per cent on your savings, that meant an annual income of $75,000, or $1,442 a week.

Today, that same $1 million will generate (from a safe investment) roughly half the annual income it once did or, as Challenger Investments chairman Jeremy Cooper estimated last week, $1 million invested today generates about the same as a government old-age pension, $1,297 a fortnight, or $648 a week.

Little wonder Mr Stevens reckons people getting close to retirement face some tough choices. One of those is whether or not retirement is an option – a decision more people are facing. This in itself introduces an entirely new set of issues, including the gumming up of the workforce with old people who can’t afford to retire, effectively blocking opportunities for the young.

There are several ways to look at what’s happening, but the starting point has to be an event that is widely seen, by mortgage holders at least, to be a big benefit – low interest rates.

For young home buyers and people moving up the property ladder there is a tremendous benefit to be gained from cheap debt; but for other parts of the economy those same low interest rates are starting to have a perverse effect, and the longer they last the more damage they could do.

Until now, most discussion about super-low interest rates has been confined to financial markets, where there has been a worldwide hunt for yield; a process forcing many investors into high-risk products such as the 9.75 per cent junk bonds sold last week by Fortescue Metals Group to US investors.

Such was the stampede for Fortescue’s paper, despite the company sailing close to the wind, that a $US1.5 billion offer attracted $US2.3 billion in fresh funds for the Western Australian miner.

Fortescue’s bonds are not a suitable product for retirees. The risk is too high, though there is a considerable temptation to get a better return than the 2.5 per cent offered by Australian banks on term deposits.

Low interest rates also go to the heart of the ‘what’s rich’ question and how the definition of rich could start to erode government finances, as the following calculation shows.

Under current laws that determine who is entitled to an old-age pension, a couple that successfully saves $2 million in cash but does not own a house is defined as rich, but a couple that owns a house worth $2 million and has a small pot of cash in the bank is not rich, and therefore entitled to a full pension.

Some people are starting to ask why they should bother squirrelling cash away in a superannuation fund if it is only going to fund a lifestyle a fraction above the poverty line.

Wouldn’t it be better, think some oldies, to own a bigger and better house, have minimal savings in superannuation and join the queue for a government-funded pension, with the cash for that pension coming from the taxes paid by younger workers.

An alternative for older workers is to work on because they can’t afford to retire, effectively become a blockage in the employment system.

Public discussion about the question of who’s rich and what defines a rich person has only just started in Australia, but it will become a big issue as more people question why are they saving when it could be doing more harm than good for their retirement lifestyle.

ALLIED to the doubled-edged (benefit or curse) issue of ultra-low interest rates is the question of how long they will last; with one disturbing/pleasing answer being perhaps ‘for quite some time’ if deflation has indeed replaced inflation as the big economic bogeyman.

What’s underpinning low rates is a surplus of cash in the global financial system; a flood caused by central banks printing vast amounts of money to try and kick-start economic growth after a period now referred to as The Great Recession.

As any economics student can tell you, too much of anything depresses its price; a point well understood in the resources sectors, where mine closures have outnumbered mine openings during the past two years.

The glut of iron ore is just one glut among many that has bankers and investors scratching their heads as they try and deal with a truly fascinating problem – we have been too successful in producing stuff.

PERTH Airport, a place we love to hate, is another business facing an interesting problem. It is busy gearing up for its first regular A380 services just as the future of the super jumbo is being debated, with some critics suggesting that the jumbo is actually a white elephant.

Despite the aircraft being a passenger favourite, the four-engined A380 is proving to be a costly beast, struggling to compete with two-engined rivals, and a growing airline preference to fly directly between smaller airports rather than use giant hubs such as Singapore and Dubai.

Meanwhile, at Perth Airport the tooling up continues for the arrival of A380s – and their departure.