Perth residents want to live in apartments, and not just in the inner city, however, a leading industry lobby group believes the state government’s planning regime is leaving them with little choice than to buy houses and land. 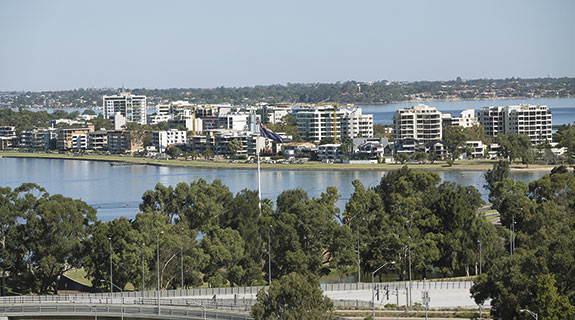 WANTED: Apartment developments outside the city, even older stock, are highly sought after. Photo: Attila Csaszar

Perth residents want to live in apartments, and not just in the inner city, however, a leading industry lobby group believes the state government’s planning regime is leaving them with little choice than to buy houses and land.

Analysis of the apartment market released earlier this week by the Master Builders Association, in collaboration with Y Research, showed apartments within 15 kilometres of the city centre had a vacancy rate of 4 per cent.

The study area covered more than 35,000 apartments in 64 suburbs, with just 1,425 of those available to lease.

The report also showed vacancies in the inner city were higher than suburbs between five kilometres and 15km from the city centre.

In Claremont, which has a market of around 800 apartments, just 2.9 per cent are available to lease, while in Maylands, a market nearly the same size as the inner city, just 3.2 per cent are vacant.

“Of those 64 suburbs, there are only 12 with more than 1,000 apartments, and it’s really those 12 that shape the direction of the market,” Y Research principal Damian Stone said.

“There is a growing, immature market, but longer term, we have to keep building. Density is our destiny.”

Master Builders Association director of housing Geoff Cooper said the results were not only an indication of the demand for apartments outside of the city centre, but showed the lack of options available for higher-density living.

“There are so many suburbs without anything three storeys and above, or very limited apartment buildings,” Mr Cooper told Business News.

“It’s really showing the lack of choice available to home buyers in WA.”

Mr Cooper said the state government needed to reassess Perth’s planning regime to free up apartment opportunities outside of the CBD.

However, on the same day the research was released, the state government announced changes to the R-Codes system, the guidelines that determine how many dwellings can be built on any particular block.

Under the new rules, the number of apartments able to be built on blocks zoned R30 and R35 has been reduced, while the state government is also seeking to limit apartment development on blocks zoned R40 to those located within 800 metres of activity centres or train station precincts.

Planning Minister John Day said the changes, which were the result of consultation with local governments and the community, were designed to ensure apartment development was better controlled and only in appropriate locations.

But the property industry was not convinced of the merits of the changes, with Property Council of Australia WA executive director Joe Lenzo describing them as a knee-jerk reaction to pressure from councils.

Mr Lenzo said there was no hard evidence the modifications were even needed, while also saying they were in contradiction to other state government planning policies, notably the Perth & Peel @3.5 million plan.

“If these changes are supposed to target development around activity centres and stations, they must be accompanied by significant rezoning in those areas or there is no hope of state or local governments reaching their infill targets,” he said.

Momentum Wealth managing director Damian Collins concurred with Mr Lenzo, saying the modifications to the R-Codes system would restrict the diversity of the housing product that developers would be able to roll out, ultimately contributing to more urban sprawl.

Mr Collins said the changes were a reaction to community opposition to higher density housing in suburbs by people who did not necessarily understand the benefits brought by that type of development.

“Density brings more vibrancy, more people, and more activity, and for a lot of people it’s going to be a benefit to the neighbourhood,” Mr Collins said.

“It’s got to be targeted and it’s got to be in the right areas; but what we’re seeing is backtracking from the Planning Commission and the state government, and very little on the other side forcing the councils to come to the party.