Economist and climate change adviser Ross Garnaut has called on the Barnett government to write down the value of coal-fired power stations and other ageing assets, warning that keeping them online threatened its ability to reduce power prices. 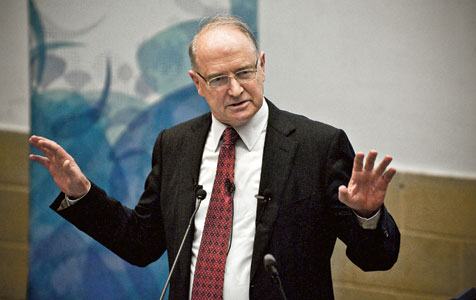 Economist and climate change adviser Ross Garnaut has called on the WA government to write down the value of "redundant" electricity assets.

Economist and climate change adviser Ross Garnaut has called on the Barnett government to write down the value of coal-fired power stations and other ageing assets, warning that keeping them online threatened its ability to reduce power prices.

“The state will have to meet the costs of past investments that have been funded by debt in one way or another, but higher prices for electricity is an especially inefficient means to this end,” he said.

“To the extent that it raises the cost of power to business users, it unnecessarily inhibits the emergence of exports from energy-intensive industries in which WA has comparative advantage.

Professor Garnaut said keeping ageing investments in a market overrun with excess capacity also made electricity more costly for households and added other costs for consumers, more than they would have to bear from alternative taxes.

“It reduces the standard of living more than comparable amounts of revenue raised from taxes on carbon externalities, on payrolls or on consumption more generally,” he said.

“With the prices of fossil fuels having fallen dramatically in recent years, and with growing awareness of Australians’ responsibility to do their fair shares in a global mitigation effort, a tax on fossil fuel use may be more attractive electorally than the most frequently canvassed alternatives: a higher tax on payrolls or on consumption in general.”

Despite the investment the 50-year old power station has been plagued with problems. Last September, Business News reported that a failure of a major transformer at Muja had taken seven months to fix and created a bill of more than $10 million to electricity retailers and undisclosed losses for the state-owned generator.

Professor Garnaut said as the cost for renewable energy decreased and more decentralised power opportunities arose through the uptake of new technologies such as battery storage, the costs of power supply across WA could fall.

“But only if the pricing of network infrastructure allows economically efficient use of the existing grid, and provides incentives for efficient allocation of investment between centralised and decentralised power in future,” he said.

The state government has previously stated while it is not considering privatising Synergy, it is not opposed to selling individual power assets.

The state government has not named which particular assets could come up for sale, noting only they include some Synergy and Horizon Power generation assets and some of Western Power’s non-core assets.