Productivity is inextricably linked to place, according to new research from Deloitte, which has urged governments and the business community alike to focus on ‘placemaking’ to help smooth the transition to a knowledge-based economy. 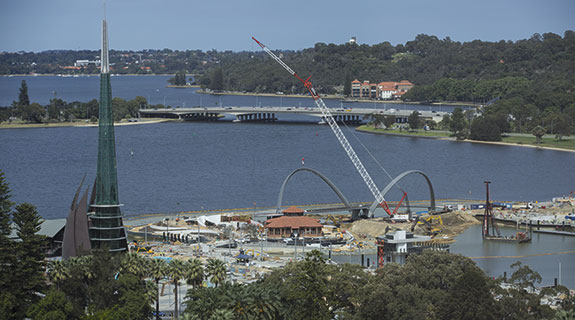 ENABLER: Elizabeth Quay could be instrumental in unlocking the potential of the Swan River. Photo: Attila Csaszar

Productivity is inextricably linked to place, according to new research from Deloitte, which has urged governments and the business community alike to focus on ‘placemaking’ to help smooth the transition to a knowledge-based economy.

Deloitte’s recent report, ‘The Purpose of Place: Reconsidered’, showed future living standards would depend heavily on productivity gains, with our cities and regions, or places, the most logical sources of productivity growth.

Deloitte Perth managing partner Michael McNulty said the report emphasised the purpose of place and how it stood in the current economic environment.

“A lot of people have thought that, with the advances in technology and everything else that allows people to work from home, place would become less relevant,” Mr McNulty said.

“We certainly have a view, and it’s been supported by the research, that in fact it’s quite the opposite.

“As social beings, the purpose of place and having a place where people can flourish is increasingly more important, rather than less.”

Mr McNulty said the report also showed investment in placemaking was no longer just the domain of government; rather it was equally incumbent on business and community groups to ensure urban centres facilitated growth.

“When you have a look at Australia’s economic prosperity, we’ve had a really good run,” he said.

“But when you look out over the next decade, we’ve got headwinds around the terms of trade and other things, so productivity is going to be absolutely core in looking at how we’re going to enhance our prosperity.

“One part of that is how do we actually get our cities and our regions and the places where we live and work to be as productive as possible.

“If you look at the investments that have been made, they are once in a generation type investments, from hospitals, the stadium, Elizabeth Quay … all of those things make an enormous difference.”

“If you create a development that hasn’t got any life at the ground plane, it’s not a great place to buy an apartment in or have an office in,” Mr Seeling said.

“If you create that atmosphere at the base, then it becomes aspirational and people say ‘I want to live in that place’.”

The global architecture firm has had a hand in many prominent Perth projects, one being two apartment towers at Kings Square that will be the city’s tallest residential buildings.

Mr Seeling said Woods Bagot had carefully considered the design of the buildings to most effectively activate the area and make it a desirable place to live, which in turn would have a catalytic effect on a city.

“Those are the kinds of things that snowball and escalate and make things better,” Mr Seeling said.

“People will start saying ‘the city is a great place to be’ and more people will come, which encourages more businesses to open and more restaurants to open.

“What we need is a few catalysts like this that will really start building momentum.”