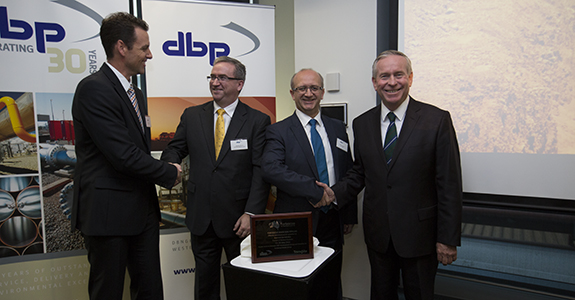 The $183 million Fortescue River gas pipeline is the longest to be constructed in the state in over a decade, and runs from the Dampier to Bunbury pipeline compressor station south of Karratha, through to Fortescue’s Solomon mine operations.

It was constructed by the joint venture owners and operators, Duet Group and TransAlta Corporation, and is the ninth major gas pipeline in Western Australia.

Premier Colin Barnett said the project allowed Fortescue to cut costs by converting the power station at its Solomon hub from diesel to gas, saving about $25 million a year.

“With an ultimate capacity of 300 terajoules per day, the pipeline also represents a significant addition to gas supply in the Pilbara, and opens up new opportunities for energy suppliers and consumers,” he said.

Mr Barnett said Western Australia's energy network was unique as a system relying more on pipelines than wires, and as such the construction had been given major project status.

"To build a pipeline of this scale in nine months i think is a wonderful achievement," he said.

Fortescue’s overall diesel consumption is expected to reduce by about 80 million litres a year, reducing carbon emissions by around 60,000 tonnes.

Gas consumption is expected to average up to 10 terajoules a day.

Fortescue chief financial officer Stephen Pearce said the pipeline was an example of how the company was driving operational efficiencies and long-term cost reductions to ensure the business remains competitive in any iron ore price scenario.

He said energy inputs were a key cost for the miner, around 10 per cent of operating expenses.

"(We're) looking at all opportunities to bring down not just the absolute cost of enrgy but also the cost of delivery of energy," Mr Pearce said.

As such, he said further work could be done to extend the pipeline to its other hubs, and upgrade generation at those facilities, but he confirmed the company wouldn't be looking to move into energy extraction in the near future.

Duet Group was also responsible for the construction of a 110 kilometre Wheatstone Ashburton West pipeline for Chevron, which was completed in December last year.

Fortescue shares were unchanged at $2.36 a share at 12pm.