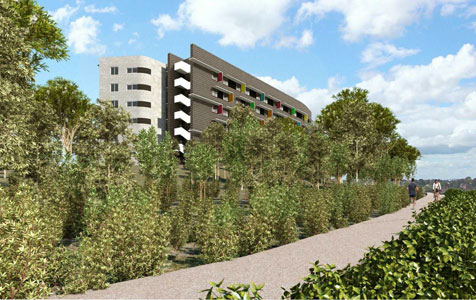 The 127-bed development, which will consist of 72 NRAS dwellings, will be delivered by global accommodation provider Campus Living Villages in partnership with ECU and is expected to be completed by January 2015.

Pindan was earlier this year appointed to design and construct a $38 million, 250-room student accommodation facility at the University of Western Australia’s St Catherine’s College in Nedlands, which is also being funded through the NRAS scheme.

The new accommodation at St Catherine’s is set to be completed by next February and follows the official opening last month of UWA’s $72 million University Hall facility, consisting of more than 500 studio and one-bedroom student apartments.

UWA Accommodation Services had secured a total of 1,000 NRAS incentives as of June this year, while Campus Living Villages at ECU had been allocated 142 incentives.

A total of 5,470 NRAS incentives have been allocated to developers in Western Australia since the scheme was launched in 2008, with 1,426 dwellings currently in the ‘active’ stage.

WA currently accounts for 14.2 per cent of NRAS incentives allocations, with Queensland and Victoria leading the states and territories.

Under the NRAS scheme, investors receive an annual tax-free incentive subject to consumer price index increases and funded by federal and state governments on a 3-1 split of just less than $10,000,

Properties are then leased out at 20 per cent below the market rate to approved low to middle-income earners.