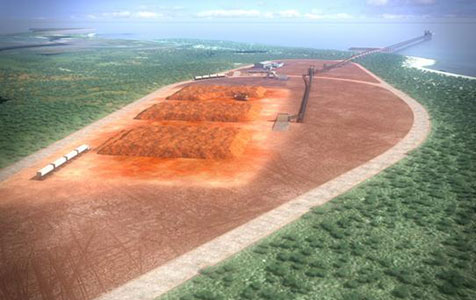 Artist's impression of the completed port

The proposed port at Cape Preston differs from most established ports in the region by using self-powered barges to transfer ore to a large transhipment vessel moored 18 kilometres offshore in deep water.

Using barges would eliminate the need for the environmentally controversial practice of dredging.

Chinese group Citic Pacific plans to use a similar system at its Sino Iron project, which is also located near Cape Preston and is on the brink of commencing production.

EPA chairman Paul Vogel said the IOH proposal was "state-of-the-art, not only avoiding the need for dredging but also the construction of massive breakwaters and therefore limiting the impact to the marine environment.”

The proposed port is part of IOH's Buckland project and is estimated cost $575 million and will initially export 4 million tonnes per annum.

The proposed facility would include, a 1.5km trestle jetty, a 20mtpa stockyard, conveyors to transport iron ore onto the barges, a permanent desalinisation plant, a road from the North Coast Highway, office buildings, fuel farm, waste management facilities, workshops and an accommodation camp.

However construction will only go ahead if eight conditions imposed by the EPA are implemented.

One of the key conditions is that marine fauna observers be on duty during construction.

These observers will ensure that no construction commences until they have verified that there are no cetaceans or dugongs within 1km, or marine turtles within 300 metres of the construction area.

Dr Vogel said an additional condition was that “marine construction will also avoid the turtle nesting period between October 20 and March 10 on any given year.”

Other EPA conditions for the proposal are designed to minimise the threat of introducing marine pests into Western Australian waters.