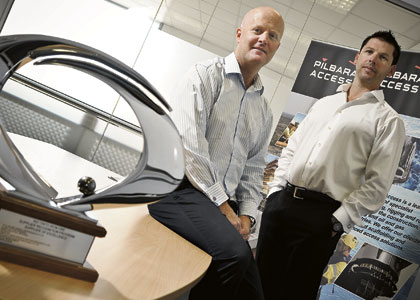 IT’S almost five years to the day since Pilbara Access began as a five-man operation, providing specialist-scaffolding services to the mining industry based out of Newman.

The company now employs more than 300 staff, has expanded into the oil and gas and construction sectors, and has established offices in Perth, Karratha, Darwin and Onslow.

Pilbara Access also has just been named winner of the maintenance category and the overall winner of Rio Tinto’s supplier recognition program.

It’s an award Pilbara Access regards highly, as founder Stephen Easterbrook says it was Rio Tinto’s focus on safety that prompted him, his father, and three other scaffolders to establish the company in 2007.

Mr Easterbrook was working as a scaffolder in Tom Price when the group of five left their jobs to start Pilbara Access.

It was a challenging time for such a venture as UK company Cape plc had just gone on a buying spree and taken over three of Western Australia’s key players, including PCH Group and Melbourne-based Concept Hire, which had earlier acquired Balcatta company Blackadder Scaffolding.

A number of new locally based companies, including Giovenco Industries and Modern Access Services, emerged shortly after Cape’s acquisition – making the scaffolding market a busy place in which to operate.

However, general manager Jim Robinson, who joined the business 18 months ago, said the company managed to distance itself from competitors by providing specialist services, as opposed to the ‘broader focus’ taken by others such as Cape.

“They (Cape) provide scaffolding, but they also provide every other service that goes with it; we’re not a one-stop shop to build everything you need, we specialise in what we do and that means we’re more focussed on what we deliver,” he said.

The business’ initial focus was solely on the mining industry, but once the GFC hit it took the decision to explore the oil and gas and construction markets.

“Stephen knew he had all his eggs in one basket and people were challenging him in his market, so he felt like he needed to challenge people in other markets.”

A head office was established in Perth and branches in Karratha and Darwin as the company continued to penetrate the markets.

The underpinning factor at Pilbara Access is a dedication to safety – a core value that Rio Tinto’s general manager of operations Australia West, Cindy Dunham, said was a key reason why Pilbara Access was named overall winner in the supplier recognition awards.

“We have a very high-risk business and we have already seen one fatality in this space and that’s just not acceptable,” Ms Dunham says.

“We have a number of safety initiatives that we do that are a bit different to everyone else and a number of processes that we use to make sure that the guys are thinking about what they do and what the risks are,” Mr Robinson said.

Mr Easterbrook is adamant it’s the business’ dedication to safety and innovation makes it ‘successful’ in the eyes of clients and also its staff.

“We are passionate and the safety of our people has to be the number one priority. I think success follows if you have got those things set in place,” Mr Easterbrook said.

“We are a business now where we can maintain and certainly attract a high calibre of access and scaffolding personnel. That is the success of the business; to be able to attract a high level of scaffolding tradespeople and retain them.”

Mr Robinson said the success was simply due to Pilbara having a different mindset to competitors.

“The business is a lot of people committed to what we do; it’s a 24-7 business and we’re very quick to react, so if you need an answer from us you’ll get it,” he said.

The company has just won a major contract for Chevron’s Gorgon project, and is also working with Thiess at BHP Billiton’s Jimblebar mine.

It was also responsible for designing and building scaffolding required for the 2011 refurbishment of Chevron’s Atwood Eagle Rig being used in the Carnarvon Basin for the North West Shelf Venture.

In the medium term it’s aiming for contracts with the Wheatstone and Macedon projects and has opened a branch in nearby Onslow to boost the appeal of its contract bids.