The recent closure of the Piccadilly Cinema may not signal the final curtain for the historic theatre, with its owners contemplating whether to reopen the art deco building as an entertainment venue. 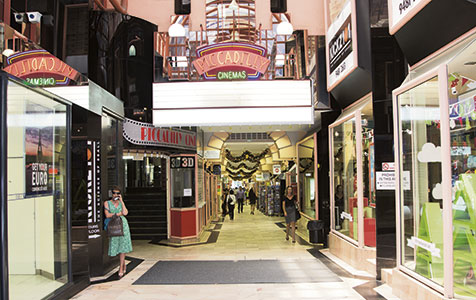 The Piccadilly Theatre could get a new lease on life. Photo: Attila Csaszar

The recent closure of the Piccadilly Cinema may not signal the final curtain for the historic theatre, with its owners contemplating whether to reopen the art deco building as an entertainment venue.

The historic cinema was closed in October following the owners’ lengthy and unfruitful pursuit of rent owed by operator, Cyril Watson.

Mr Watson took over the lease on the 75-year-old building (which adjoins the Piccadilly Arcade) in 2005, with its international owners – Winston Holdings, Su-Rama Holdings and Ayoman Pty Ltd – now claiming more than $400,000 in unpaid rent.

The owners’ local representative and power of attorney, Terry Posma, told Business News they were considering options for the venue’s future use.

One possibility was refurbishing the building so it appealed to another cinema operator; the Piccadilly suffered from poor upkeep and operators have struggled to compete with both the modern cinema complexes and Perth’s emerging arthouse scene.

“The cinema was getting run down,” Mr Posma said.

He said refurbishments to continue its use as a cinema or, alternatively, to change its purpose would be a “significant undertaking” and he could not put a timeframe on when it was likely to reopen.

Concerns were raised earlier this year over the safety of the building, with reports asbestos was flaking from its roof, however Mr Posma said those issues had been addressed.

“That all had to do with the way the cinema was being operated and some of the things the cinema operator did,” he said.

“There was a WorkSafe review of the building and basically the one thing that was picked up on was fixed straight away.”

The building was constructed in 1938 to provide the Perth community with a venue to enjoy arts and entertainment, which the Heritage Council of Western Australia states as a contributing factor to its permanent status as a heritage-listed building.

“The construction … reflected the optimism and the desire for enjoyment and entertainment that prevailed at the end of the Depression,” the council says in its justification for awarding the building heritage status.

“At the time of its construction the place was fitted out with the most modern features and was the first cinema in WA to be air-conditioned.”

Mr Posma said the owners had no preference over the building’s future use but would make a decision based on what made the best business sense.

He declined to comment on whether the owners had undertaken court proceedings to recoup the rent owed by Mr Watson.

It’s not the first time they’ve been stung by a tenant failing to pay rent as the operator before Mr Watson – convicted paedophile Dennis John McKenna – left the cinema in 2004 with significant debts owing.