Phil Britten has fought harder than most to achieve his goals. 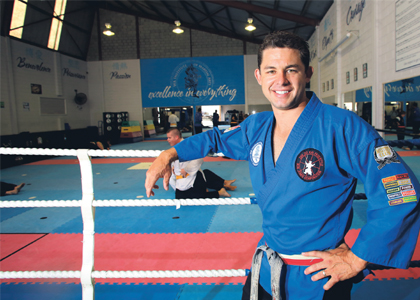 Phil Britten has fought harder than most to achieve his goals.

It's a hot summer’s day in Perth and a group of people is braving the heat to participate in a martial arts class in Greenwood.

It’s a scene familiar to Phil Britten, who has found that empowering people through martial arts is his life’s calling.

The ‘vessel’ he chooses to execute this calling may not be the most traditional for those in the corporate world, but there’s clearly much more to it than just the fitness aspect.

“In this day and age people are screaming for character development, both adults and kids,” Mr Britten said.

“Martial arts, the punching and the kicking, we call that the vessel. You come here and you punch and kick, but you walk out of here feeling great and that’s what it’s all about.”

Mr Britten co-owns and operates what is arguably Australia’s most successful martial arts organisation — the WA Institute of Martial Arts (WAIMA) — which was set up after what he calls the “lost years” following the 2002 Bali bombings, where he lost seven of his friends and was badly burned.

Up until that point, Mr Britten’s life was all mapped out and he was on his way to a football career; a childhood dream he had since growing up in Exmouth and cemented when he was signed up to the West Perth Football Club at the age of 14.

There were other childhood aspirations as well, including martial arts, having grown up watching the Karate Kid films; but there was no-one to teach it in the Pilbara town, and Aussie Rules was where the glory was for Mr Britten.

However, martial arts had always been Mr Britten’s back-up sport, which he took more seriously at the age of 16 after injuring his knee in football and needing another form of exercise to supplement his aerobic fitness and strength.

“Martial arts helped me to get back to where I really wanted, back to my glory days,” he said at his Greenwood martial arts studio.

It got him on the right track and by the age of 22, after three years at the Kingsley Football Club (where he was captain and won a number of awards and also achieved a black belt in freestyle karate discipline Zen Do Kai), he had re-signed with West Perth before embarking on the life-changing trip to Bali.

“Six hours into Bali I got blown up,” said Mr Britten, who upon returning to Perth had to seriously reassess his life.”

After several years of going through survivor’s guilt and living life on the edge, Mr Britten came to a point in 2007, as a martial arts instructor for someone else’s business, that he wanted his own school.

With the support of his (now) wife, he opened his first school, in East Victoria Park, and within a year had 100 students enrolled.

“I saw a vision, I saw the outcome and I could tell this was sort of coming home to a degree but fast forwarding my business career in martial arts,” he said. “We had youth and enthusiasm on our side.”

The pair tore down existing procedures and systems and rebuilt the school, and in a year had doubled student numbers and quadrupled profit.

WAIMA recently opened its second school, in Currambine, enrolling 150 students in just four months. Among WAIMA’s student list are government agencies and corporates, among them Skywest, an agreement that came about through a contact at his first martial arts school.

“I think it came down to what we did here (at WAIMA), teaching excellent classes, making sure people came first, building rapport and having them feel like they’ve just had the best time of their life,” Mr Britten said.

The corporate theme appears to have flowed through to Mr Britten’s other passion, motivational speaking, which he started doing in 2003 on his grandmother’s suggestion as a way to heal from the Bali bombings.

“For a year that was the way it was, spilling my guts, crying it out in front of strangers,” Mr Britten said, starting out at Lions Clubs then progressing to schools and universities and now the corporate world.

“Mainly my talks are focused on business development, motivating employees to inspire and getting them to work better.”

Ultimately, Mr Britten sees his long-term career path heading towards motivational speaking when WAIMA is at a stage where he no longer needs to be there on a day-to-day basis.

“I want be a pioneer in Australian martial arts, to show people they can have a career like this and be successful and fulfilled.”