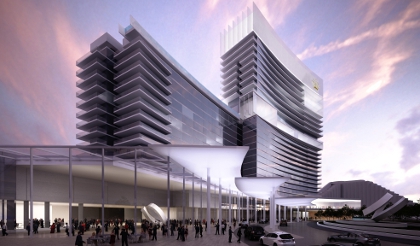 An artist's impression of the completed Crown Towers development.

Crown Limited and the state government have struck an agreement that is expected to result in the development of a new 500-room luxury hotel at the Burswood Entertainment Complex and a substantial expansion of its gaming activities.

The company said today it would spend $568 million on the six-star hotel, to be known as Crown Towers Perth.

Construction of the hotel is due to commence in early 2013, and be completed in 2016.

It will be the third hotel at the site, taking hotel room capacity at Burswood to 1200.

The hotel will be built on land currently owned by Burswood, as well as land to be acquired from the state at an expected cost of $60 million. The land is adjacent to the complex and currently part of the golf course.

Crown said that under an in-principle agreement with the state, the government has agreed not to oppose its application for 500 additional gaming machines and 130 additional gaming tables at the casino including new private gaming salons.

The application will go before the Gaming and Wagering Commission of WA, and if approved will be rolled out over five years.

Burswood currently has 1850 gaming machines and 190 gaming tables, following an agreement in 2010 in which Crown agreed to spend $350 million expanding its facilities and pay a higher rate of tax to the state.

The new hotel has been welcomed by the state goverment, which has introduced incentives to encourage investment in the sector.

Tourism Minister Kim Hames said only 223 net new rooms have been opened in the city since 2006, none of which involved a new hotel opening.

That will change later this year when Frasers Suites Perth, an all-suites 184-room hotel, opens near the Causeway in East Perth.

Of the established hotels in Perth, the largest is the Pan Pacific, with 486 guest rooms, according to WA Business News Book of Lists.

Tourism Council WA chief executive Evan Hall described the new hotel as “the most significant tourism investment in over a decade.”

“This is a major step forward in addressing the critical hotel room shortage which has been holding back leisure tourism in regional areas across the State," Mr Hall said.

“Many regional tourism destinations are suffering because we are turning away tourists who cannot find a room in Perth before travelling into the regions.

“The new hotel will increase the number of rooms available in Perth by over 8 per cent."

Chamber of Commerce and Industry of WA chief executive James Pearson said "with significant demand for hotel rooms largely coming from business travellers, the new hotel, once built, will provide much needed capacity to grow the business tourism market".

"More premium hotel beds will also increase the ability for Perth to hold major conferences and events, an important part of promoting investment and tourism," he said.