The look of the new 60,000-seat Perth stadium to be built in Burswood was unveiled today by Premier Colin Barnett, who guaranteed it would be open in time for the 2018 AFL season. 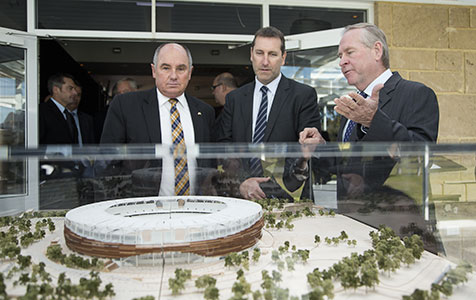 The look of the new 60,000-seat Perth stadium to be built in Burswood was unveiled today by Premier Colin Barnett, who guaranteed it would be open in time for the 2018 AFL season.

“It will be without doubt the best sporting stadium in Australia,” Mr Barnett said.

The design features a halo roof with LED lighting that can be customised to team colours, a five-tiered stadium and a bronze facade designed to reflect the state’s natural geology.

Other features include larger seats with greater lines of sight than at Patersons stadium, cup holders, more than 1,000 TV screens, radios in the toilets and two 240 square metre video screens.

The WESTADIUM consortium, led by Brookfield Multiplex will construct the stadium and precinct, which Mr Barnett said had come in $40 million under budget.

Sport and Recreation Minister Terry Waldron said the stadium and precinct, which includes the surrounding playgrounds and picnic areas as well as an amphitheatre, would cost $862 million.

He said the total cost including maintenance payments would be $1.13 billion in today’s dollars to be paid over 25 years similar to a home mortgage.

He said the government was still negotiating final financial details, but he was confident the final $1.13 billion price would not change.

“This stadium will generate revenue that will help offset some of these payments,” Mr Waldron said.

Australian Football League will be the main user of the stadium, followed by cricket.

The stadium has been designed to host rectangular field games as well, which can be accommodated with drop-in seats closer to the pitch.

Mr Barnett said the decision to move the stadium from Subiaco to Burswood had meant the effort so far had gone into construction plans, and sporting code discussions and securing events could now occur in earnest.

He said once the stadium opened, it would be like nothing Western Australians had experienced before.

“Whether it’s cricket or football or whatever, going to the sporting event will be a totally different experience for West Australians. It won’t just be watching the game, there’ll be activities outside in a beautiful parklands setting,” Mr Barnett said.

The government was light on details regarding the development of public transport near the stadium, which is due to include two bus stations and a train station at the now closed Belmont Park Station.

Mr Waldron said it planned that 83 per cent of a full crowd at the stadium would be able to leave by trains and busses within an hour.

Construction of the stadium is due to begin before Christmas.

Mr Waldron said the stadium had been designed to eventually increase its capacity to 70,000 and 80,000 seats.

Tourism Council WA chief executive Evan Hall welcomed the design of the new stadium and predicted it would become a major tourism attraction and icon for the state.