THE Perth CBD is among the nation's most energy efficient business districts, with buildings in the precinct performing at levels above the Australian average in a number of key areas. 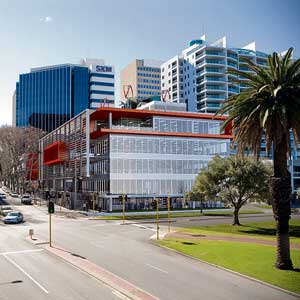 THE Perth CBD is among the nation's most energy efficient business districts, with buildings in the precinct performing at levels above the Australian average in a number of key areas.

Figures from the Sustainable Energy Development Office reveal that the Perth CBD has a higher percentage of buildings that are NABERS energy rated than any other Australian city.

The average building rating for Perth is also higher than the national average, with the Perth buildings averaging 3.3 stars out of five stars compared to 3.1 stars nationally.

NABERS, which incorporates the Australian Building Greenhouse Rating, is a government initiative that rates buildings on their operational impacts on the environment.

Stockland has signed a commitment agreement with SEDO to achieve the state's first five-star energy rated commercial office development under the NABERS system for its $50 million project at 2 Victoria Avenue.

The building incorporates sustainable design elements including an automated louver system on the western façade, highly efficient chilled beam heating and cooling, and wind turbines, which will provide 25 per cent of the building's base electricity needs.

"It cost around 10 per cent more than what we could have built it for, but it would have been a considerably lesser product for that 10 per cent," he said.

As at December 2008, there were 16 commitment agreements in WA to achieve 4.5 stars.

The developers of Century City, Raine Square, Bishops See, and 140 William St have all committed to design, construct and operate their buildings to a 4.5-star level.

Existing buildings with the highest NABERS energy ratings in WA include the five-star rated The Atrium at 168 St Georges Terrace, with 80 Stirling St, QV 1 and Central Park all rated at 4.5 stars.

To achieve its star rating, Bishops See used materials that had been certified to meet high environmental standards. It also incorporated tenant-based initiatives, including bicycle parking, changing rooms and showers.

Mr Cambridge said while there was an added cost, there was increasing interest in green buildings even in the current economic climate.

"If anything it's more likely to be something that's looked at a bit more seriously," he said.

"The way a building is financed is a direct result of attracting tenants ... and a green star rating is of benefit if you're trying to attract tenants.

"Developers are looking long term; it's true that buildings are often put on hold in these times, but the quality of the building doesn't necessarily change."

The Green Building Council of Australia also administers a star rating system, and has awarded Bishops See and 140 William five star star ratings out of a possible six green stars