The latest uptake of CBD-based projects could provide the shot in the arm Perth needs to boost international student numbers. 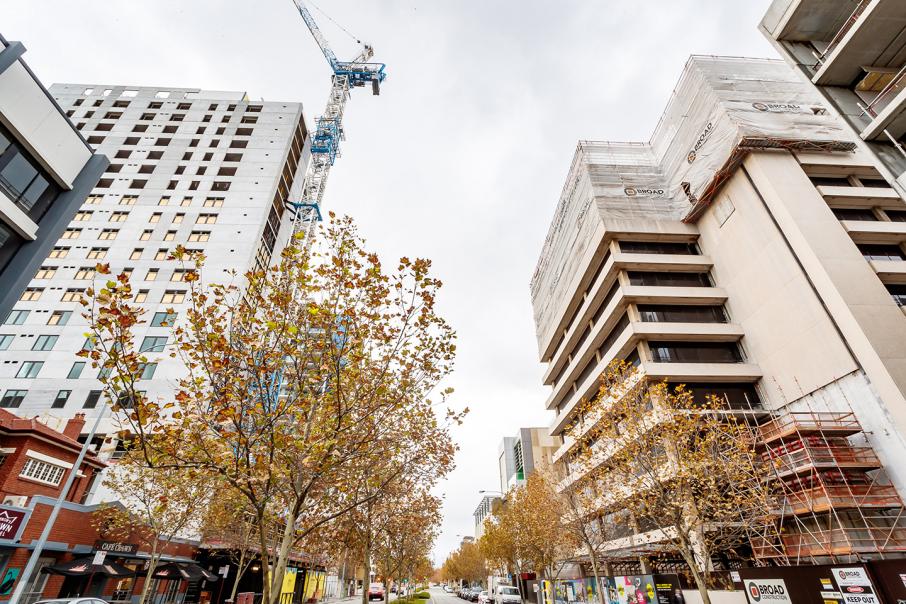 The Boulevard (left) and Campus Perth (right) on Stirling Street are both tipped to open in time for the 2019 academic year. Photo: Ryan Ammon

The latest uptake of CBD-based projects could provide the shot in the arm Perth needs to boost international student numbers.

Perth led the country when it came to the intake of international students in the 1980s, according to Rod Jones, chairman of Study Perth, the state’s peak body for promoting the international education sector.

But that was no longer the case, Mr Jones told a recent Property Council of Australia event, with the latest figures from the Western Australian Higher Education Council showing Perth’s share of the national foreign student market had fallen from about 10 per cent a decade ago to 7 per cent currently.

“There has been no focus on international education as a value-add for this state, and this has been by successive governments over the past 30 years; we’ve been driven totally by the resources sector,” Mr Jones told the event.

“We’ve heard lots about the transition of Australia’s economy, the end of the resources boom and the need to harness new growth sectors.

“It’s (international education) Australia’s largest export industry after iron ore and coal; export earnings are expected to be about $32 billion this year and the sector employs about 130,000 people.

“And we have some 624,000 international students studying in Australia already, with a target to increase that number by 2025 to about 1 million.

“Being able to meet accommodation needs is one of the major concerns.”

Mr Jones said while WA’s universities had invested in student accommodation over the years, there had been no purpose-built housing in the CBD, which had led to a lack of choice.

In 2016, the Perth Education City project, involving all of the state’s universities, was launched to explore how Perth could grow as an international education city, with one objective to stimulate interest from student accommodation providers and investors.

Four student accommodation projects have since been proposed for the CBD, with three now under construction.

Also speaking at the event, Savills director Conal Newland, who heads the student accommodation team across Australia, said although there was now a pipeline of about 3,500 beds in WA in terms of off-campus purpose-built student accommodation, it was a long way behind other states.

Mr Newland said a number of global institutions had realised the untapped demand for this asset class; Melbourne currently had the biggest pipeline with about 16,000 new beds planned, followed by Brisbane with 11,000 beds.

He said high-quality accommodation driven by design was important to keeping Australia at the forefront of the international student market.

“If we achieve our student numbers of 100,000 international students, roughly doubling what we (Perth) have now, then why wouldn’t we also look at doubling our purpose-built CBD accommodation?

“That will provide the sort of vibrancy that is even more attractive to future students.”

Local developer Stirling Capital is one of the first-movers in Perth’s city-based, purpose-built student accommodation space.

Its $41 million, 23-level tower, named The Boulevard, on Stirling Street is under construction by BGC, with works due to be completed in time for the start of the 2019 academic year.

Stirling Capital has engaged global student accommodation provider GSA to manage The Boulevard under its The Student Housing Company brand.

GSA has been operating in the sector for 25 years.

Head of commercial operations for Australia and China, Craig Oliver, said it had recognised students needed a place that fostered and delivered communities, interaction and security, as well as somewhere to sleep.

Designed by MJA Studio, the 571-bed student accommodation will feature a mix of self-contained studios, twin studios and shared apartments, where every student will have their own private room and study area. 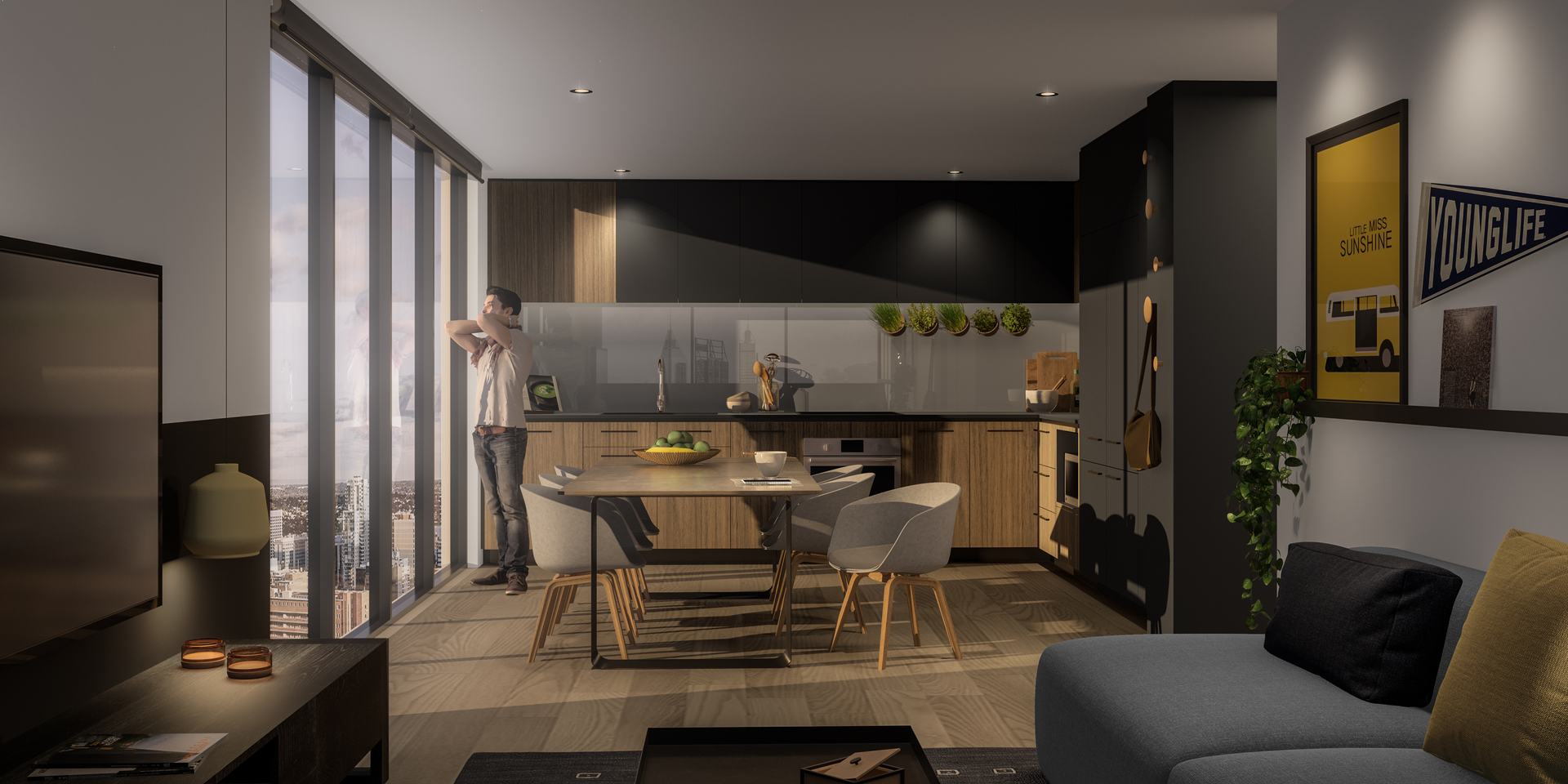 A rendering of one of The Boulevard's studios. Image: MJA Studio

A display apartment at The Boulevard was launched earlier this month. 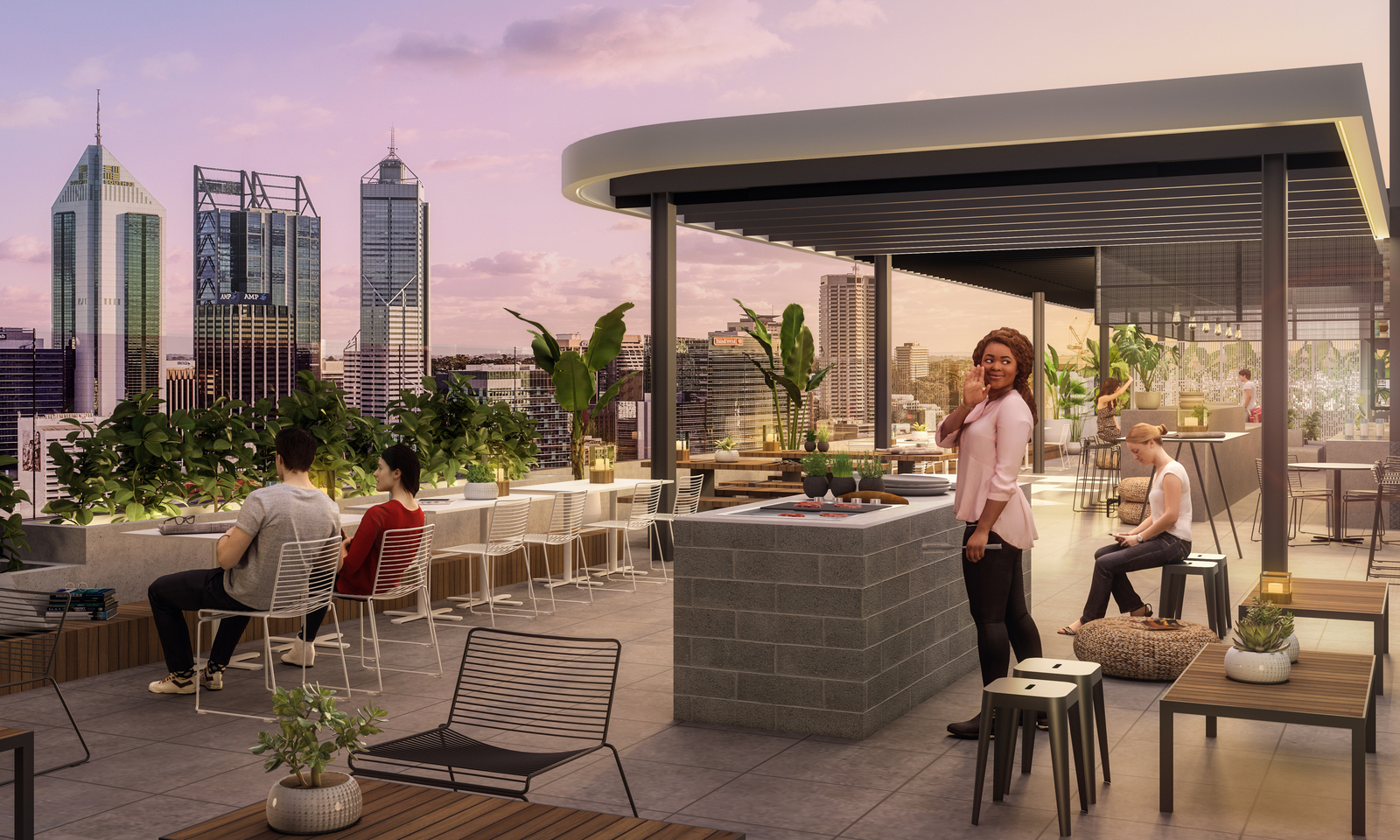 “We already have world-class universities, so one of the missing pieces of the puzzle is having that diversity in accommodation offerings,” Mr Reinecke told Business News.

“Injecting tertiary students into the CBD will have a positive effect on Perth and its vibrancy; you only need to look at the impact on Melbourne to see it’s a real positive for the city.

“It has flow-on effects to tourism … lots of different parts of the economy.

“And the fact we now have the state government and universities aligned with a collaborative approach to attracting students to Perth is exciting.”

Broad Construction has started work on Campus Perth, which neighbours The Boulevard at 80 Stirling Street, and is also anticipated to open in time for the 2019 academic year. 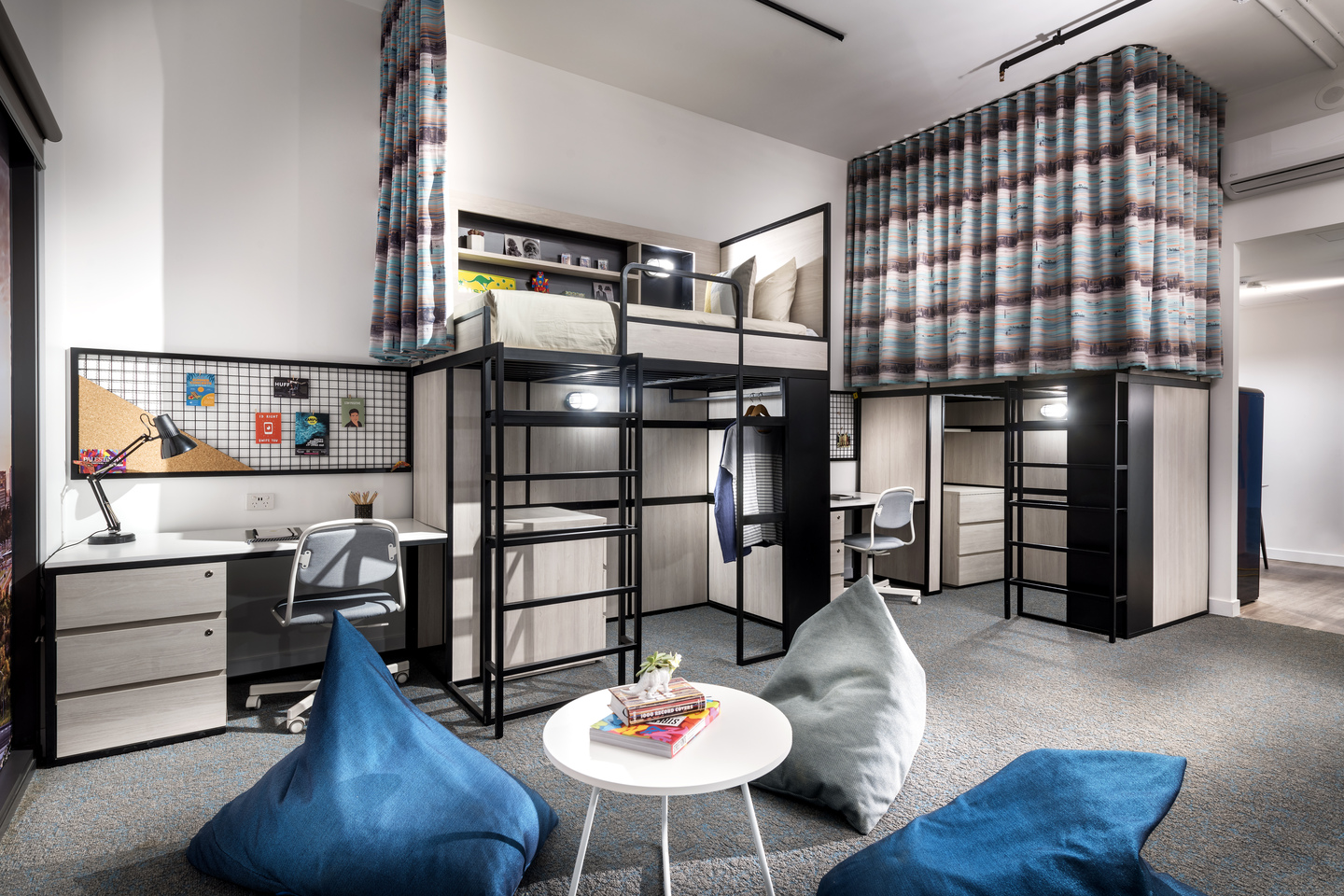 Campus Perth will be the group’s second student accommodation project to come under its Campus brand, which was established in Hong Kong several years ago.

GCP Hospitality chief marketing officer Marc Bichet said creating a community-driven environment underpinned the Campus brand, and the group had teamed up with architecture firm Woods Bagot to deliver a space that celebrated all realms of student living.

“We wanted it to be fun and welcoming,” Mr Bichet told Business News.

“There is simply nothing else in Perth that meets the demand for design and community-led, affordable home away from home for students, both domestic and international.”

Campus Perth comprises 3,600 square metres of public areas, designed to host pop-up events, including The Commons (an open lounge area that features a gaming space with pool tables), and The Link (a co-working space with meeting rooms, with various screen and monitor options). 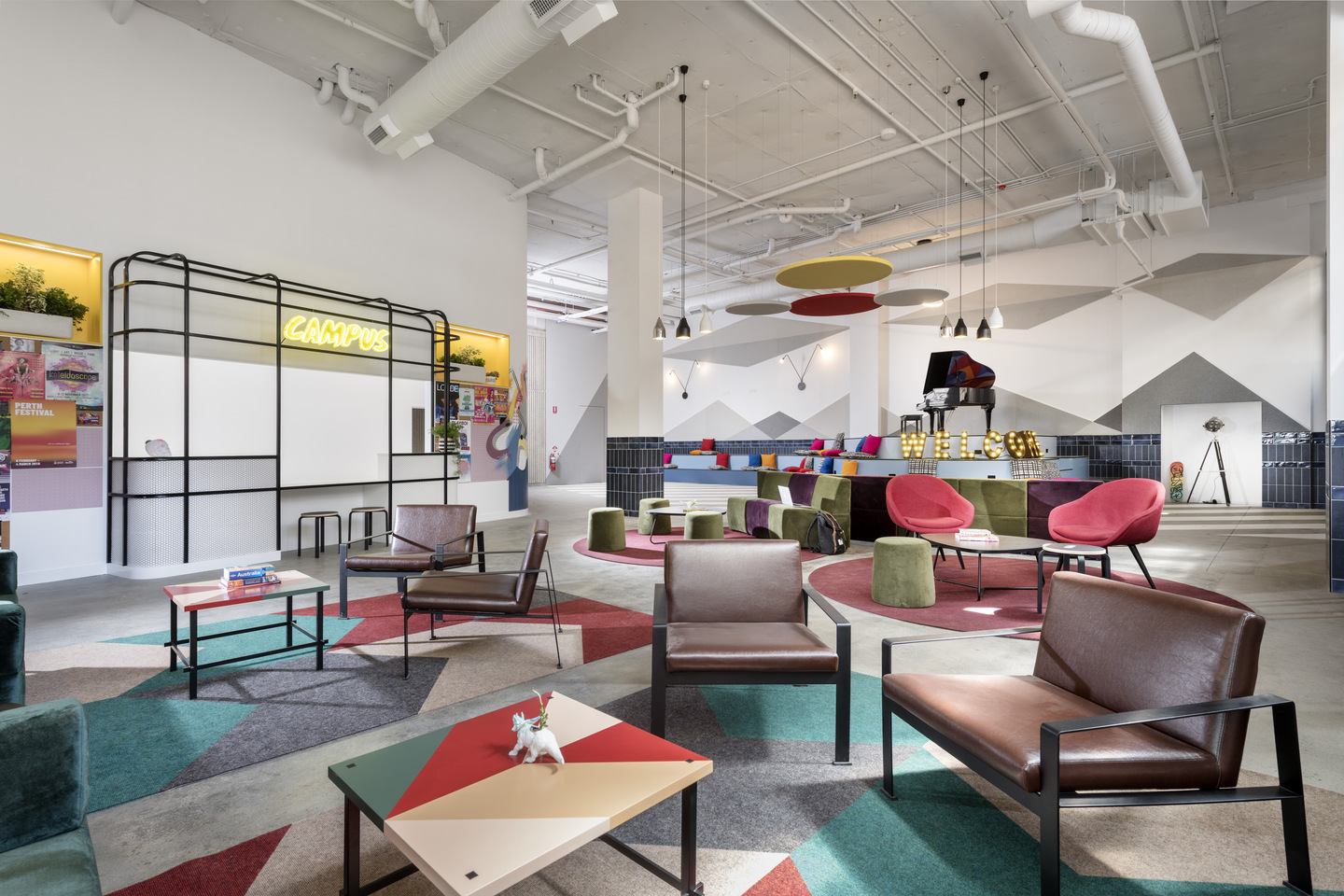 One of Campus Perth's communal spaces.

The accommodation will also include a fitness club, several communal kitchens and a barbecue rooftop area, with permanent security.

“The diversity of each space offers choice for students in how they socialise, study, collaborate and seek retreat,” she said.

“We’ve left space for students to curate and put their personal touch on spaces, and there’s a level of playfulness with custom-tagged skateboards and local art integration.

Ms Sue said the design took a hyper-local approach, with finishing details such as Cottesloe Beach-printed curtains and a commissioned graffiti mural at reception by local artist Daek William. 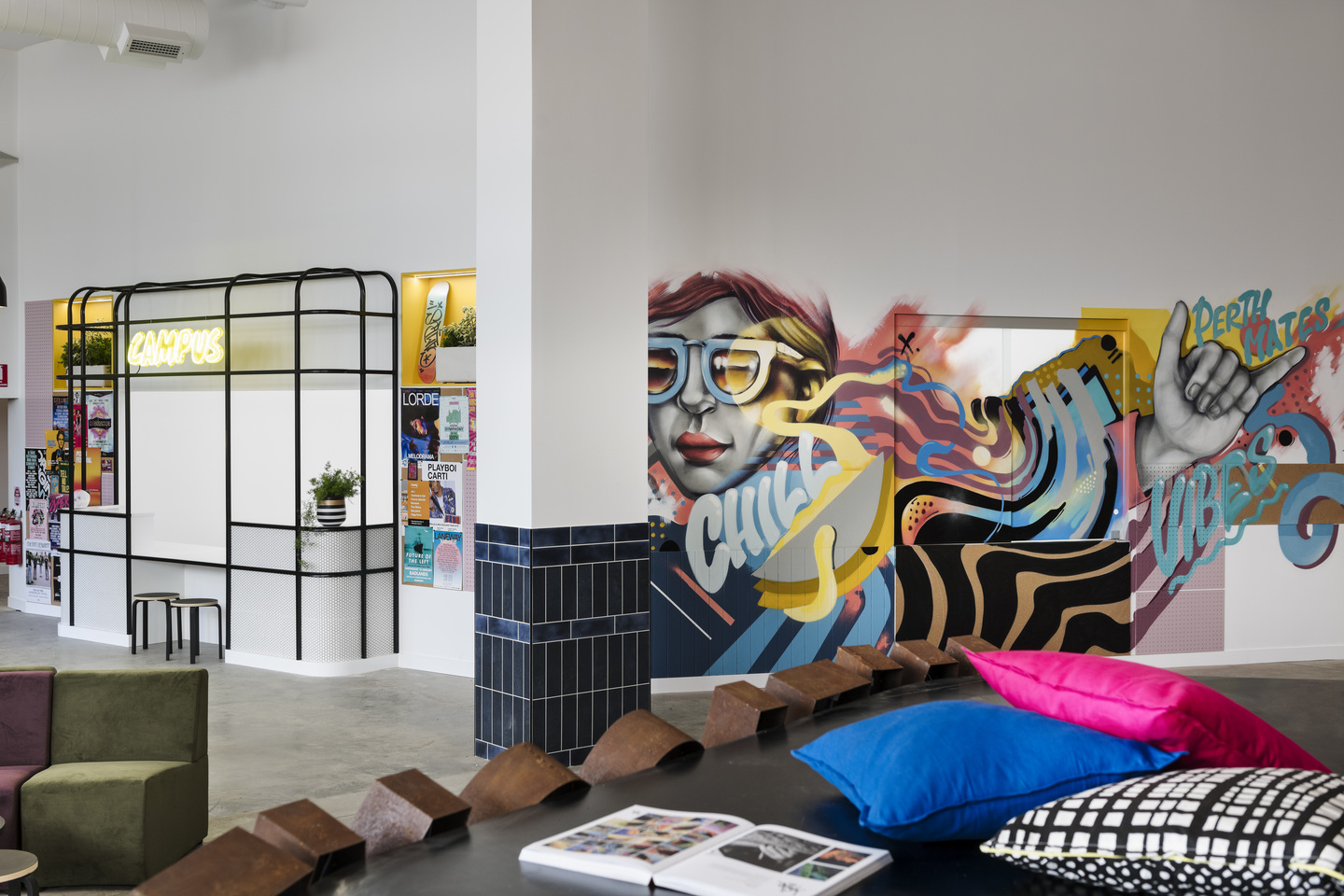 Part of the project includes a new landscaped connection between Stirling and Pier streets, designed to further activate the precinct with retail and casual dining offerings across the ground floor. 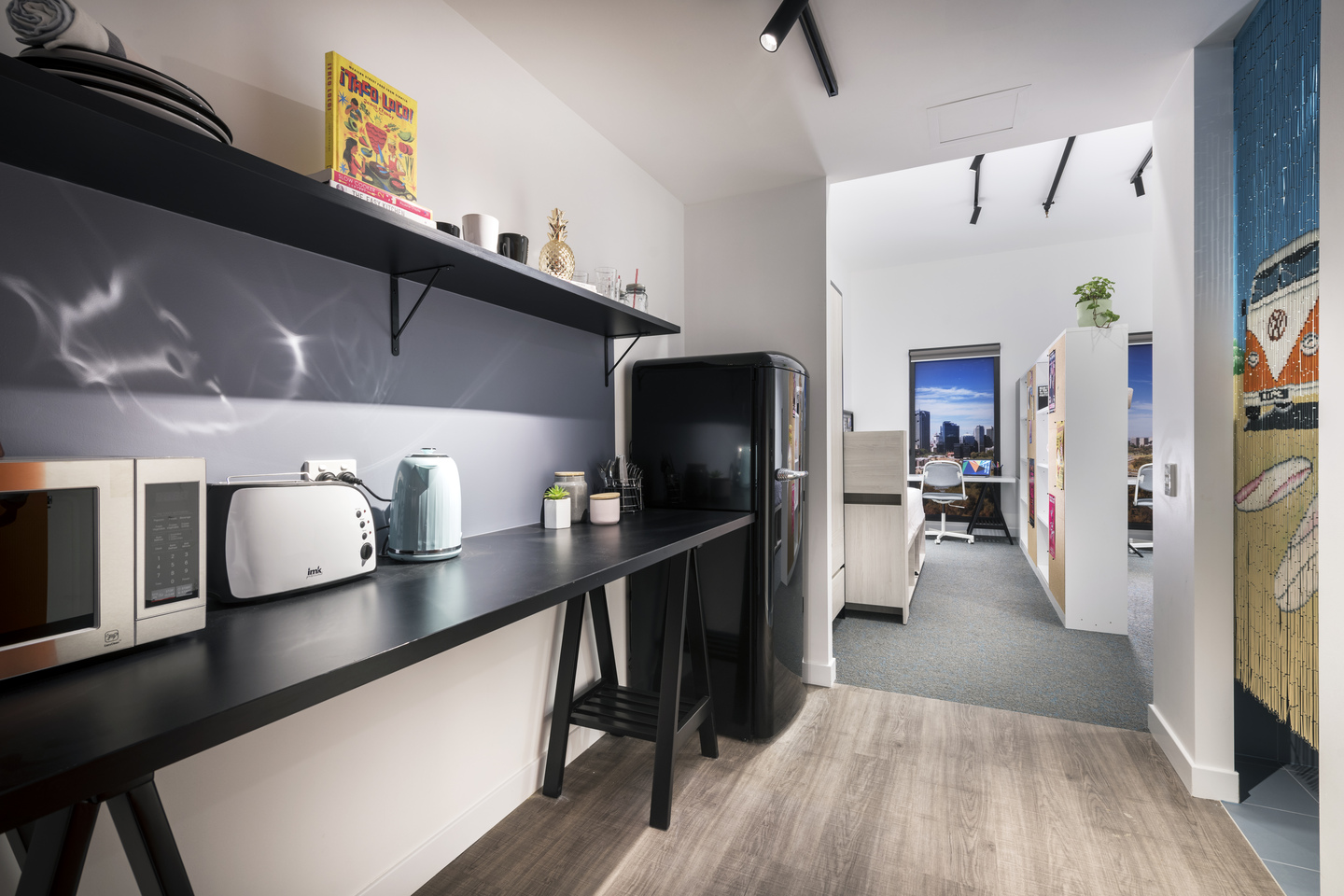 Construction company Built has started site work at the 30-storey Atira Student Living project on the corner of Pier and Wellington streets, formerly home to the Wellington Surplus stores.

Atira is a joint venture between Brisbane-based Blue Sky Real Estate and Goldman Sachs, due to open at the start of the 2020 academic year.

Other projects in the pipeline include plans for a 550-bed student housing project on Roe Street, although Cedar Pacific is yet to announce a delivery timeline.

The group already has student projects under way in Melbourne, Brisbane and Adelaide and says it is focused on acquiring more sites including in Sydney and Perth.