Perth residents can now see how their hometown stacks up against the world’s greatest cities via a ground-breaking online project, which compares life in global urban centres. 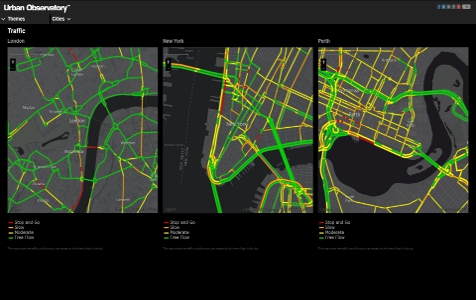 Perth residents can now see how the Western Australian capital stacks up against the world’s greatest cities via a groundbreaking online project that compares life in global urban centres.

Developed by mapping giant Esri, Richard Saul Wurman (the founder of online conference platform TED), and Radical Media, the Urban Observatory website features interactive maps that enable users to explore factors such as population distribution, land use, and even road speed limits in the most prominent cities on the planet.

Perth is the first Australian city to join the global network, which also includes New York, London and Tokyo.

Esri Australia business manager Tom Gardner said the Urban Observatory provided an insight into the key elements that made up great metropolitan locations.

“The only way to understand the complexities and challenges of large cities is to compare them with other areas,” he said.

“The Urban Observatory is powerful because it visualises the physical, demographic and cultural patterns of some of the greatest urban centres in the world via the universal language of maps.

“Comparing cities in this way can inspire ideas about how to meet challenges rapidly growing cities like Perth face, such as sustainability, housing density, population aging and traffic movements.

“City planners and developers can also compare and contrast to gain a better understanding of city structures and urban growth.”

The Urban Observatory consists of live, dynamic maps that feature layers of wide ranging data of each city.

Users can position the maps of three cities side by side in a common scale and compare categories such as work, movement, people, public and systems.

Mr Gardner said it was a compelling way to communicate Perth’s future plans with the broader public – as well as a way for them to identify key comparisons with other cities around the world.

“We’ve worked closely with organisations such as the Department of Planning, Main Roads Western Australia, Public Transportation Authority, and the Australian Bureau of Statistics, to ensure a wide range of rich, up-to-date information is available for the public to access,” he said.

“By mapping and analysing this data, the Urban Observatory will help Perth answer key questions for its future, such as how demand can be met for housing and infrastructure.”

The Urban Observatory project can be viewed here.