Sandy MacKellar and Chris Glass’s counter-cyclical approach to property investing has delivered high returns during the past 20 years. 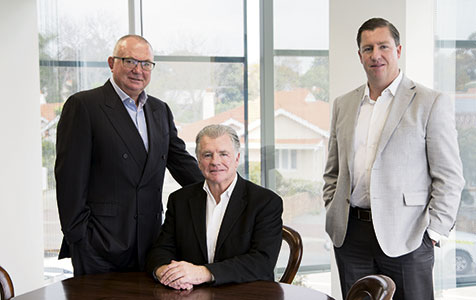 WHEN those in the small team at Property Bank Australia evaluate investment opportunities, they generally aren’t attracted to markets with high rents.

Nor are they interested in markets with lots of cranes on the horizon, because that is a signal extra supply will hit the market.

Instead, they are looking for markets with the best potential to deliver strong capital growth over a five to six-year period.

“It’s our belief that is the best value market in Australia,” Sandy MacKellar told Business News.

“The fundamentals in North Sydney will still be there for the next two to three years,” Mr MacKellar said.

Another market that ticks the right boxes is Melbourne’s CBD fringe, where Property Bank Australia has bought three office buildings.

In Perth, the relatively high rents make it attractive for developers to build new office buildings.

That is evident at the City Link site, at Brookfield Place, and at fringe locations such as Northbridge and West Leederville, where multiple office buildings are under construction.

Sydney’s north shore is seeing the opposite, with a number of office buildings being converted to residential apartments.

“A lot of the buildings have dual zoning, so they are being converted, which will reduce office vacancy rates.”

Property Bank’s current focus is a big change from past investments.

It was a big investor in West Perth office buildings during the past decade, while also investing in industrial properties and shopping centres.

Its syndicates have delivered an average annual return of 36.1 per cent, with most of the return coming from capital growth (27 per cent) and the balance from rental yield.

He was joined soon after by Chris Glass, who had previously worked for property fund manager Armstrong Jones.

Their very first purchase was at 33 King Street, where they introduced the Louis Vuitton store.

The duo has since been joined by Gus MacKellar, who previously worked for CB Richard Ellis in Sydney, and Mirvac.

“Each acquisition we make is by a different syndicate,” Mr Glass told Business News.

The Property Bank syndicates do not have a fixed term; that gives the managers discretion over the timing of their sale.

Mr Glass said the group had made a number of acquisitions from ‘terminating’ trusts, which were forced to sell purely because of the terms of their trust or lack of liquidity.

Property Bank is aiming to double its management portfolio, currently valued at more than $200 million, during the next three years.

“We achieved an average annual return of 36 per cent in the last cycle. We’re not saying we’re going to match that but we are expecting to get very solid returns,” Sandy MacKellar said.

Mr Glass said Property Bank typically added value by upgrading or repositioning each of its properties.

He cited the example of Subiaco’s Pavilion Markets, which the group bought from receivers in 2002 for $5 million.

After five years of intensive management, it was sold for $25 million.