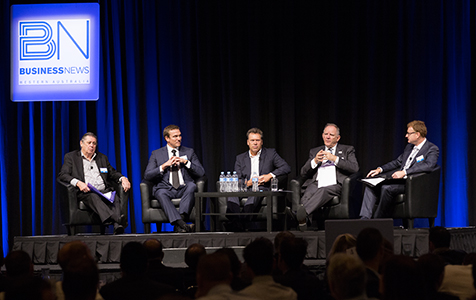 Perth’s residential market is being dominated by house and land packages and apartments, leaving a gaping hole of medium-density housing despite public calls for more dwellings of that type, according to a panel of prominent property executives.

Hames Sharley chairman Bill Hames told a Business News Success & Leadership breakfast this morning the housing stock currently being rolled out in the metropolitan area was not diverse enough to meet the needs of Perth residents.

Mr Hames pointed to a study co-authored by Hames Sharley for the state government, ‘The Housing we’d Choose’, which showed 82 per cent of homes being developed in the Perth metropolitan area were stand-alone houses.

Semi-detached homes made up 10 per cent of the market, while apartments made up just 8 per cent, Mr Hames said.

According to a survey attached to the study, only 58 per cent of respondents wanted stand-alone homes, while 32 per cent wanted semi-detached dwellings and 10 per cent were keen on apartments.

“We’re not delivering, and I see that as a fantastic opportunity for developers,” Mr Hames said.

“Perth does not offer a complete range of housing, which is available in other cities.

“As we become more dense and as we get more development around train stations and things like that, there are going to be more apartments.

“But I think we need more housing choice, and that also starts to make our city a damn site more attractive.

“At different family life-cycles you need to make different house choices, and this city lacks choice.”

Real Estate Institute of WA president David Airey said the current composition of Perth’s housing stock had largely been influenced by ad-hoc planning policies, which had driven house and land packages on the urban fringes or high-density development in infill areas.

“That’s prevented the public from getting the choice they want,” Mr Airey said.

“What’s been foisted on the public is smaller blocks, which they don’t necessarily want, particularly for families.

“And in the case of apartments, the assumption is that everyone wants to live in an apartment.

“My anecdotal evidence is that a lot of people have tried apartments and have moved back to an alternative lower-density, such as a villa or a townhouse. Those are the choices that are lacking.”

Hegney Property Group founding director Gavin Hegney said Perth homebuyers had traditionally had to deal with compromises when determining what type of property they could afford.

“In the past we have tended to compromise on location and Perth has sprawled,” he said.

“But with 50,000 new cars going on the road every year, with Perth reaching a maturity cycle and going to the next level, and things are starting to be priced and framed around public transport and accessibility, people are making the choice.

“For the last five to seven years, people are increasingly making that choice towards compromising on accommodation rather than location.

“That says to me that apartments and smaller housing choices are very much on the radar.”

“There is a huge number of people that don’t necessarily want a house or an apartment, there is a middle ground,” he said.

“But how the apartment market is overcoming that is through increased height you get the economies of scale to do amazing common facilities.”

Mr Blackburne said the company’s recent $135 million Aria apartments project in Swanbourne was a good example of the trend to create five-star facilities, with $2 million of the construction budget set aside for common areas.

“We’re going to see that middle ground being met by apartments, where you just do much bigger and better common facilities,” he said.

“There are towers of 15 to 20 storeys coming in the city and in Northbridge, where there are going to be whole rooftops becoming pools, barbecue areas, private dining areas and private lounges.

“So although you have a smaller apartment, if you want to be in a great area you can actually get facilities that you would get in a hotel at home, that’s where the market is going to go.”

A full gallery of photos from the breakfast this morning can be found here: http://on.fb.me/UrqYRX