Perth gets taste of a ‘reimagined’ world 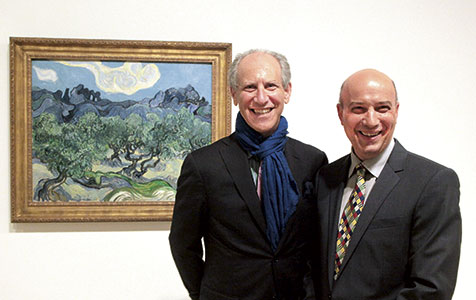 Great artists of the 20th and 21st centuries feature in the third exhibition to come from New York's Museum of Modern Art.

VAN Gogh, Dali & Beyond: The World Reimagined' opened this week at the Art Gallery of Western Australia.

The exhibition is the third in a series of six on loan from the world famous Museum of Modern Art (MoMA) in New York.

Art Gallery of Western Australia director Stefano Carboni said the exhibition, which marks the halfway point in the MoMA series, confirmed the success of the gallery's programs.

"We are a small institution here, but what we manage to do are big shows," he said.

Fortescue Metals Group chairman Andrew Forrest, who was recently appointed as chair of the Art Gallery of Western Australia Foundation, said Mr Carboni and MoMA director Glenn Lowry had developed a significant level of professional trust, which enabled the AGWA to secure such prestigious works.

Mr Lowry said the exhibition, which is the only one of its kind in the Southern Hemisphere, took three of the big genres of painting – portraiture, landscape and still life – and examined how some of the most influential artists of recent times had pulled those genres apart and put them back together.

"In many ways (the exhibition is) one of the most spectacular shows that we've done and travelled in many, many years," he said.

Mr Carboni said the MoMA series was a shift from how the art scene in Perth had previously operated in a 'blockbuster' style, featuring a single work of a famous artist.

Mr Carboni said this had resulted in spikes in audience attendance, and what Western Australia needed was continuity in what the gallery displayed.

Mr Lowry agreed, adding that 'Van Gogh, Dali & Beyond: The World Reimagined' would have effects beyond pure attendance, and that restaurants and cafes nearby would see an uptake in business as well as WA more broadly benefitting from people travelling to the state to see the exhibition.

Premier Colin Barnett, who attended the VIP launch of the exhibition, said the state was lucky to have such an extraordinary exhibition and believed the public would strongly support it.

The exhibition is open from June 22 to December 2 and features 134 pieces from 96 artists, ranging from Van Gogh's 'The Olive Trees' to Jasper Johns' 'Painting Bitten by a Man' which has the artist's teeth marks embedded in the work.