The new underground Perth Busport will be delivered on time and $40 million under budget, Transport Minister Dean Nalder says. 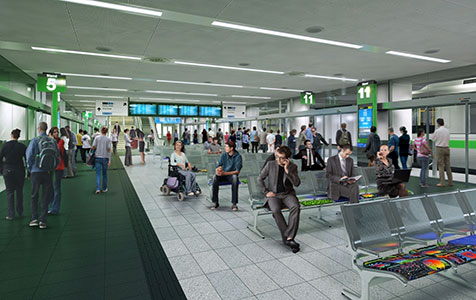 An artist's impression of the new Perth Busport's passenger lounge.

The new underground Perth Busport will be delivered on time and $40 million under budget, Transport Minister Dean Nalder says.

At the final design unveiling of the $209 million, two-level busport, Mr Nalder said passengers would have access from three separate entrances at ground level and connect seamlessly to Perth City Link.

The station, which was expected to cost $249 million, will consist of a 16-stand, fully air-conditioned lounge level, which will have about 160 seats and include lifts, stairs and escalators, which will connect passengers from the ground-level entry points to the underground.

Adopting an airport passenger lounge-like feel, the station will also be fitted with large screens that will provide passengers with stand locations and departure times, in real time.

“It’s going to use an active dynamic-stand management system, which will allow a 50 per cent increase in the number of buses to come through during peak hour,” Mr Nalder said.

“The system allocates each bus to a stand between two to five minutes before departing the busport.”

He said the location of the entrances to the busport would take more buses off Wellington Street and around Perth Arena and ease congestion.

“We really want to make this area a pedestrian-friendly environment,” Mr Nalder said.

However, the bus entrance to the busport from Wellington Street is under discussion by the Metropolitan Redevelopment Authority, the City of Perth and the Public Transport Authority.

“It will be among the best in the world when complete in 2016,” Mr Nalder said.

The busport is being constructed under a consortium between Brookfield Multiplex and BG&E.