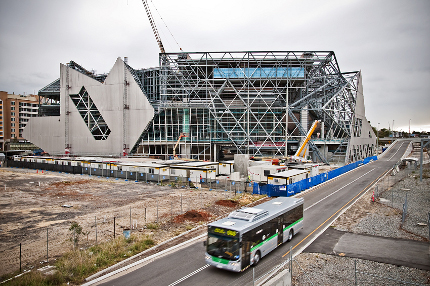 CLIMBING: The state government is facing another cost blow-out at the Perth Arena

In an update on the trouble-plagued Perth Arena, the state government said today the project faced a “slight” cost blowout, confirmed that AEG Ogden would manage the venue, and unveiled details of its corporate suites.

In a media briefing, treasurer Christian Porter said the 14,000-seat complex was “back on track”, but acknowledged that contractual disputes with builder BGC were yet to be resolved.

BGC boss Len Buckeridge has been highly critical of the project, and has previously vowed that he will not pay penalties of $45,000 per day after missing a June 30 completion deadline.

BGC is believed to be preparing a counter-claim of $53 million for repeated changes to the project.

Mr Porter said today the government’s relationship with BGC was “pretty good” and blamed the problems on the former Labor government.

The project was originally estimated to cost $160 million; that increased to $335 million when BGC was awarded the contract in 2007, and the latest official estimate is $480 million.

Mr Porter said today the cost would be “slightly more” but refused to be drawn on specifics.

“I can’t give you an answer……until those contractual disputes are sorted out,” Mr Porter said.

Meanwhile, Sport and Recreation Minister Terry Waldron indicated that OEG Ogden, named one year ago as the preferred proponent, would be the manager of the venue.

“The finalization of that is imminent, and once that happens, AEG Ogden will be working with Events West, and I am sure they will be ready to go when the venue is finished,” Mr Waldron said.

At today’s briefing, the government showcased the first completed corporate suite in the venue.

“These offer a total capacity for 540, who will enjoy sweeping panoramic views of the event floor and bowl from their seats,” the ministers said in a joint statement.

Mr Porter emphasized that Perth Arena would be a world-class venue that would attract quality performers to Perth.