People dispensable in search for profits

The owners of capital are looking for maximum returns, and if sending work offshore is one way to achieve that, then more local jobs will go. 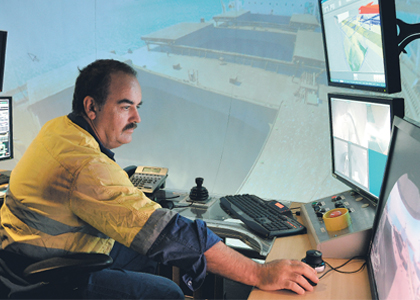 HANDS-ON: Rio Tinto is at the forefront of remote operations technology in the resources sector. Photo: Rio Tinto

The owners of capital are looking for maximum returns, and if sending work offshore is one way to achieve that, then more local jobs will go.

JOBLESS prosperity sounds like nonsense. In normal times it would be, but in Australia today a mix of economic and political forces is conspiring to create wealth, but not jobs, with Western Australia the trend leader.

Driverless trucks and trains -as being trialled by Rio Tinto and BHP Billiton in their Pilbara iron ore mines - are the most obvious example of how jobs are being replaced by computers.

Floating LNG production barges are another illustration of local onshore jobs being replaced by a single high-tech ship anchored far from the coast, which will generate enormous profits for its owners but virtually no local employment.

There are valid reasons for companies operating in a competitive environment to seek production solutions that lower costs.

In Australia today, however, there is a rush under way as the owners of capital seek ways to do business by employing the minimum possible number of people, and even then by locating as many of their employees as possible overseas.

Outsourcing telecentre staff has been one of the fastest growing trends in businesses that can work that way, even at the expense of thoroughly annoying customers in Australia who are forced to deal with people who have English as a second language.

Even the newspaper industry has joined the charge to shift whatever jobs it can to places with lower wage costs and less-onerous employment conditions; with major publishers such as Fairfax. Media and News Corporation shifting some of the sub-editing and page make-up jobs offshore.

What’s happening is a classic clash of labour and capital, a never-ending fight between owners and employees over who gets the bigger profit share.

The top lobby organisation for capital, the Australian Industry Group, last week provided a good explanation of the issue from a business perspective, laying much of the blame for the ‘offshoring’ trend at the feet of pro-labour policies enacted by the federal government.

Unfortunately, much of what the AIG said was straight from the Liberal Party’s manifesto and will be dismissed accordingly by the Labor Party.

There is, however, a powerful message in the AIG’s attack on a policy pendulum that lias swung too far in favour of unionised labour, layering disincentive-on-disincentive for companies to create local jobs.

Whether it is the obvious question of high wages, or union entry rights into a workplace, or a fresh attack on the use of contractors, is not the issue.

Those matters are merely symptoms of a bigger list, which includes:

• Australia’s status as one of the world’s most expensive countries, a dangerous place to be as ora terms of trade decline and profits start to shrink;

• other countries cutting costs as Australian costs continue to rise; and

• a global currency war which looks like leaving the Australian dollar at near-record levels relative to competitors.

AIG’s warning that more jobs will go offshore unless there is a change of government policy is both stating the obvious and too late to effect a drift that risks becoming a stampede.

Some jobs, obviously, cannot go offshore. There will always be a need for labour in some form.

But if a job can be done cheaper, faster and with minimum disruption it will be shifted, with every industry looking for ways to minimise exposure to Australia’s uncompetitive labour market.

In a world connected by highspeed, and increasingly reliable communications, that means virtually any job that uses computers.

Time for a rethink

BRIAN Burke will probably not be a speaker at next week’s In The Zone conference being held at the University of WA - even if he deserves to be.

The disgraced former premier of WA was a keen supporter of initiatives that are very close to those championed by academics at UWA, pressing in the 1980s for greater regional ties with WA’s neighbours to the north, and even proposing an insurance exchange whereby Perth would emerge as a regional link to Lloyds of London.

It was, of course, a theory overtaken by events; and a case of business being quicker than government to realise that it doesn’t actually matter where you base your business, as long as you’re well connected.

A time zone advantage, which is what the UWA event is trying to promote, is not really an advantage at all because business today is a 24-7 process.

An Asian buyer of minerals exported from WA is not interested in whether the mines are due south and therefore in the same time zone.

Fie simply wants the best price and best service, and while recognising that the raw material has to be shipped from Port Fledland or Dampier, he’s happy to negotiate with the vendor whether that part of the process takes place in Melbourne, Perth or Fondon.

Fhat’s why Burke’s original push to make Perth the western financial gateway to Australia was a flop, even after attracting one of Japan’s biggest banks to open an office in WA.

Within a few months, the Industrial Bank of Japan recognised that it was in the wrong city, shifting the bulk of its operations to Sydney, leaving a ‘head office’ brass plaque on its Perth office front door, and a handful of staff.

History will repeat itself because while politicians and academics, with their 9-to-5 approach to working hours like the simplicity of being ‘In Fhe Zone’, business works all hours and inevitably migrates to places that are most welcoming, and much cheaper than Perth.

ENERGY is fast becoming the elephant in the room in terms of defining winners and losers from the slow-motion global economic recovery from the 2008 financial crisis.

In the US, as pointed out last week by the International Energy Agency, energy costs are falling as gas production rises.

In Europe, where a recession is morphing into a depression, energy costs are rising and the backbone of that region’s economy, German heavy industry, is starting to complain about being undercut by US competitors.

Australia, even if environmentalists don’t like the idea, is following in US footsteps as shale-gas exploration accelerates and the benefits of rising production start to reach local industry.

“Be nice to people on the way up, because you’ll meet them on your way down..”
Wilson Mizner