Australian businesses are settling their invoices at a ‘record-setting pace’ of 45.1 days on average, according to a quarterly report by Dun & Bradstreet. 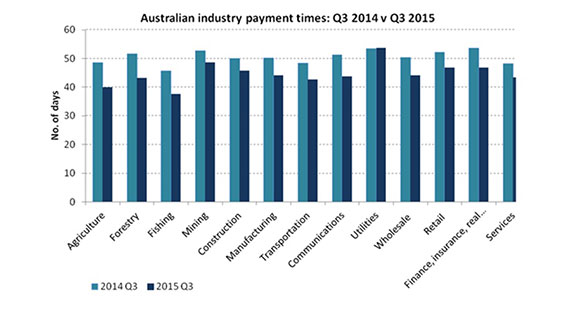 Australian businesses are settling their invoices at a ‘record-setting pace’ of 45.1 days on average, according to a quarterly report by Dun & Bradstreet.

However, the number of businesses that settled their invoices within 30 days had fallen 2 per cent to 66 per cent, while 26 per cent paid their invoices in 31-60 days, compared with just 21 per cent in the previous quarter.

“According to Dun & Bradstreet’s business expectations survey, 43 per cent of businesses would choose to miss a payment to a trade supplier if they were unable to pay all of their bills,” the report said.

“The survey also found that 35 per cent of businesses have had a customer or supplier become insolvent or otherwise unable to pay them during the past year.”

Business with between six and 199 staff were found to have paid their invoices at the fastest average rate of 41.5 days, while businesses with between one and six employees recorded the most improvement at 43.4 days, compared with 47 days in the previous quarter.

Businesses in the utilities sector were the slowest to pay their invoices, with an average of 53.7 days – 1.7 days slower than the previous quarter and on par with the same time last year.

Mr Koukoulas said the sharp reduction in invoice payment times indicated the economy was in sound shape and there was no need for further interest rate reductions from the Reserve Bank of Australia.

“The invoice payment times are often viewed as a measure of financial stress for the business sector – when firms are slow to pay their bills, they are generally experiencing financial pressures and when payment times fall, as is the case in the past year, they are clearly cashed up,” he said.