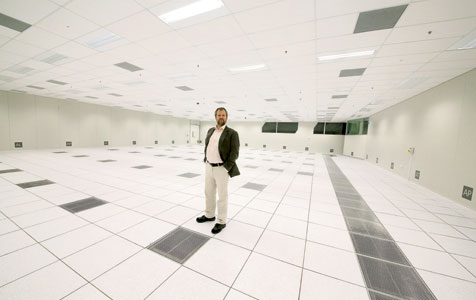 Neil Stringfellow will oversee delivery of the first supercomputing components into the Pawsey Centre in Bentley.

The supercomputing force that will power Western Australia’s scientific researchers is fast-taking shape at the new Pawsey Centre in Technology Park.

The $35 million building in Bentley to house a ‘petascale’ supercomputer has been officially handed over to iVEC – the joint venture tasked with building and running the facility, which will cost $80 million in total.

Over the past fortnight, the first computing components have been delivered and prepared for assembly in the 1,000-square metre space.

Neil Stringfellow has also taken up his post as iVEC’s executive director, having been recruited from the Swiss National Computing Centre.

Dr Stringfellow’s initial responsibility is overseeing implementation of the first supercomputer – dubbed ‘Magnus’, due to be completed in July.

It will be a 69 Teraflop machine – to anyone outside of the computing industry - ‘flops’ are a measure of how many calculations a computer can process per second.

The average iPhone runs no faster than 1 Gigaflop (one billion calculations per second).

In comparison one Teraflop is one trillion calculations per second – meaning the initial computer to run at the Pawsey Centre will be 69,000 times more powerful than your average iPhone.

The second stage of the development (to be completed within a year) will involve the implementation of a computer with combined power of more than 1 Petaflop; one million times more powerful than an iPhone.

Part of that will be a supercomputer operating in real time and dedicated to radio astronomers working on the Australian Square Kilometre Array (SKA) and Murchison Widefield Array projects.

The Pawsey project has been lauded as leveraging WA’s bid for involvement in the SKA project by providing supercomputing power to analyse data captured by what will be the world’s largest and most sensitive radio telescope.

But that work will only account for a quarter of the research undertaken at the Pawsey Centre; opportunities also abound for areas such as geoscience, nanoscience and other computational communities.

Mr Stringfellow said a phased implementation approach was being taken to avoid overwhelming researchers with the possibilities afforded by the future ‘petascale’ computer.

“At this stage it’s very well that they may not comprehend the possibilities of such a supercomputer,” Mr Stringfellow said.

A quarter of the total processing power will be allocated to geoscientists, potentially testing new ways of visualising the state’s geology and mineral resources.

Mr Stringfellow told Business News this provided opportunities for private companies to collaborate with researchers on ways of visualising resources and novel methods of exploring for minerals or oil and gas.

iVEC was established in 2001 as a joint venture between CSIRO, Curtin University, Edith Cowan University, Murdoch University and the University of Western Australia. In 2009, it was charged with establishing the Pawsey Centre.

It has already built supercomputers at both Murdoch University and the University of Western Australia over 2010-11, which Mr Stringfellow said were running at capacity.

“It’s fair to say that on a time scale we’re about two thirds of the way through. But when it comes to how much work is to be done we’re only about half of the way.”

Dr Stringfellow said it was also exciting to be part of a project using novel approaches to offset energy requirements.

The centre uses groundwater and solar energy to help cool the facility, aiming to make energy requirements for cooling – by far the most energy intensive – carbon neutral.