SPECIAL REPORT: Forecasts are finally turning positive for WA residential construction, as the industry continues to evolve its offering in a new era of increased housing diversity. 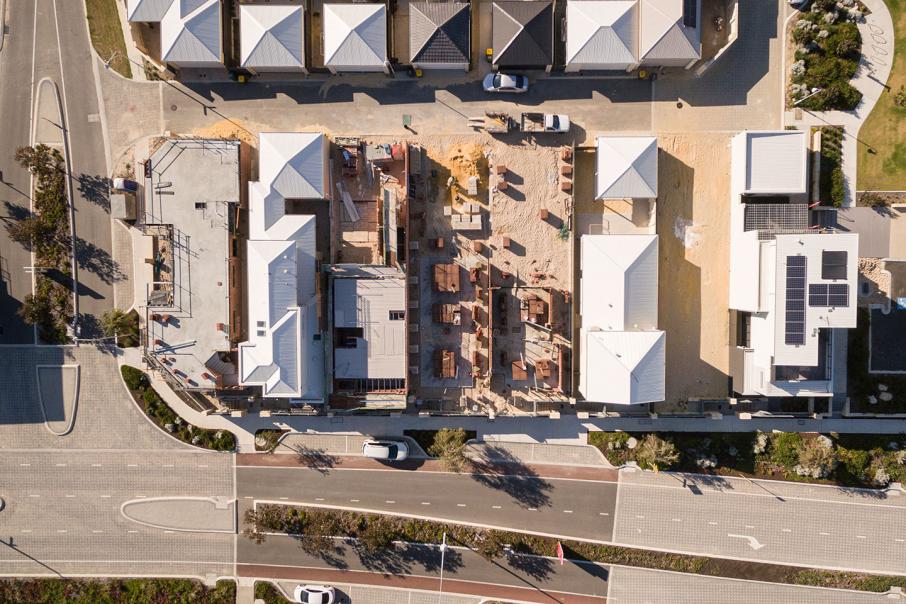 New housing activity is currently half of what it was at the industry’s cyclical peak five years ago. Photo: Gabriel Oliveira

Forecasts are finally turning positive for WA residential construction, as the industry continues to evolve its offering in a new era of increased housing diversity.

Western Australia’s residential builders are probably feeling a strong sense of déjà vu as yet another set of industry forecasts indicate activity has bottomed out and recovery is just around the corner.

For the last several years of what has become a half decade-long downturn, market analysts have told builders to weather the storm for the next 12 months until a gradual, but steady, recovery takes hold.

So it is understandable that industry leaders are taking a cautious view of any prediction of an upswing of activity in WA housing, particularly after Australia’s credit squeeze last year stifled a positive turn in momentum.

“Everything is actually pointing in a good direction, interest rates are low and the price of land is good.

“But I’d say it’s too early to make a call on a recovery.” 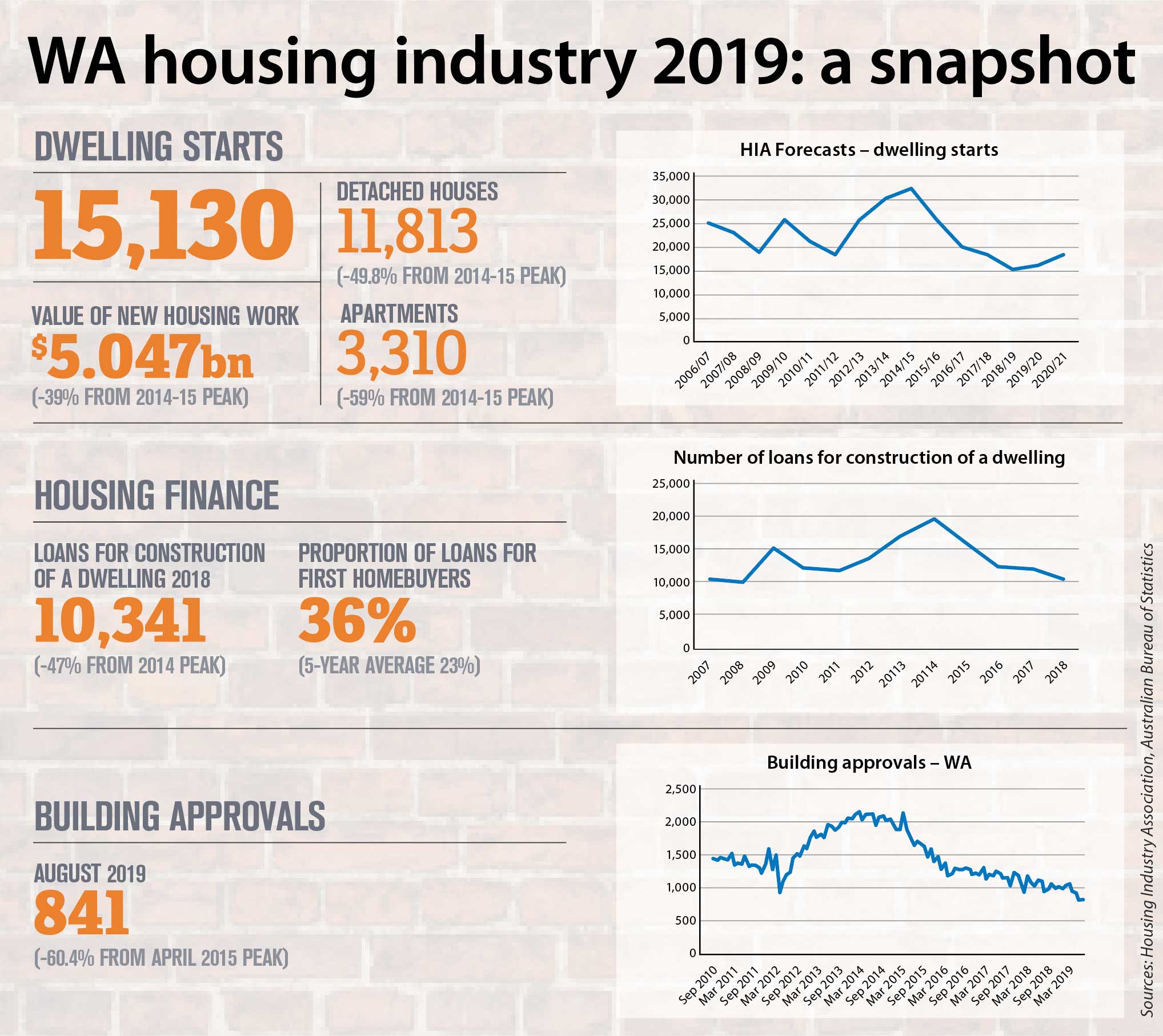 ABN Group managing director Dale Alcock had similar thoughts, acknowledging that while early indicators in 2019-2020 were positive, it was too soon to know if improvements would be sustained.

“We are seeing some early signals of better activity through the months of August and September,” Mr Alcock said.

“This has resulted in marginally better land sales activity and better levels of leads and sales of new homes.

“While the modest improvement in activity is welcome, it is too early to call recovery.

“I do believe that we will continue to experience volatility in sales levels, but that this will generally be an upward trend from here.”

Even a superficial analysis of the state’s housing industry data since the market peaked in 2014-15 at around 32,000 dwelling starts (more than 23,500 detached homes and around 8,100 apartments) demonstrates why WA’s builders are more cautious than optimistic.

The latest Housing Industry Association data shows there were around 11,800 detached housing starts in WA in 2018-19, about 50 per cent less than the cyclical peak of the market.

Against that backdrop, many would expect an uptick in insolvencies in WA’s construction sector.

However, Australian Securities and Investments Commission data shows the number of construction companies going under was 170 in 2018-19, just a shade higher than the 160 that went bust at the peak of the market in 2014-15.

Mr Walter said he believed the lack of a spike in builders going out of business was an indication of the maturity of the market’s operators, as well as the structure of the industry in WA.

“People are very intelligent in how they operate,” he said.

“WA, from a housing perspective, is also unusual in that the major 10 builders build more than half the houses.

“On the east coast, you’re looking at double or triple that number of builders for that market share.”

BIS Oxford Economics chairman Robert Mellor described WA’s building decline at a recent conference in Perth as a “painful episode”, and while he was not yet ready to call an immediate recovery in WA, he forecast a stronger upswing than the HIA in coming years.

“The fundamentals should start to drive that recovery.”

Those fundamentals Mr Mellor referred to includes a wave of new projects in WA’s resources sector, with 12 projects recently under way or likely to proceed this year to require more than 20,000 workers, according to research by Business News.

But while more than $20 billion of investment has buoyed spirits in the mining industry, there has yet to be a significant flow-on effect into housing.

“I believe there are some positive signs and drivers in motion that will start to slowly improve construction numbers over the next 12-24 months,” Mr Bartier told Business News.

“However, to see a significant improvement to housing commencements, WA needs strong employment and population growth and the reintroduction of foreign investors.”

Stimulating foreign investment interest is one of several stimulus measures Mr Alcock is lobbying the state government to implement, in close collaboration with the Master Builders
Association.

He also said he was continuing to work with MBA to heap pressure on Treasurer Ben Wyatt to consider increasing WA’s first homebuyer’s grant to more than $10,000, a move Mr Alcock said would be necessary to ensure the future health of the industry.

“This is a vital measure to bring forward activity in order to get our trades back to work,” he said.

“The longer this low level of activity continues, the less capacity our industry will have to service any upturn when it arrives.

“Trades don’t simply sit on the sideline waiting for better times, they go and get a FIFO job for the short, or in many cases, the
long term.”

The only positive in a down market, Mr Bartier said, was that it gave builders time to take stock and refine their offering.

For BGC Housing Group, that refinement includes a new headquarters in Osborne Park, which will provide a cutting-edge base for the company’s 11 housing and development brands.

ABN Group is also consolidating locating its housing and development brands under one roof, partnering with Fini Group to create a purpose-built headquarters in Leederville.

“If there is a positive to be found in a housing market downturn it is that it encourages new thinking and innovation,” Mr Bartier said.

“We have remained focused on continually improving our customer offering through innovation of new product and process and delivering greater value in every home we build via more efficient designs and improved specification.

“We have also been working collaboratively with industry partners to deliver some exciting built-form projects that have delivered strong results.

“WA’s housing market is cyclical, and while the current downturn is the longest in recent history, it will recover.

“We remain focused on best positioning BGC Housing Group for this market recovery with a new state-of-the-art premises and showroom opening early 2020.”

At JWH Group, Mr Walter said the company had recently undergone a significant restructuring of its brands, sharpening each unit’s focus on specific market segments.

One of those initiatives was the introduction earlier this year of SOMO, a business unit dedicated to servicing the diverse housing needs of first-time buyers.

Mr Walter said the recalibration of JWH Group was in line with an evolution of housing type under way in WA, with builders less reliant on the state’s tradition double-brick method of construction.

“There is a lot more framed housing going on now, and a lot of soft-top houses being built – the second storey being framed,” he said.

“It’s also due to the evolution of the smaller lots.

“If you start talking about blocks that are only four to five metres wide, if you look at double-brick versus a framed wall, there is quite a saving on space for the framed.”

Mr Walter said his company had also been able to ride-out the downturn by cutting costs, including a reduction in the number of display homes it produces annually to around 10.

“I am guessing in the last five years the number of display homes would have dropped by about 60 per cent,” he said.

“That’s been quite a dramatic change in how the industry operates.

“What people had to realise is display homes got out of control, there were so many of them out there.

“In a rising market that’s fine, you can make money when you sell your display home. But when the market started turning and stagnating, for the cost of building a display home you’d actually end up making a loss on
the sale.

“And some of the builders out there were carrying 80 display homes. We’d be doing maybe 10 a year. It’s down dramatically.”