Red Mountain Mining has withdrawn its $1.4 million rights issue after underwriter Patersons Securities terminated the agreement, as the company’s share price closed lower than the offer price of 0.8 cents for three days. 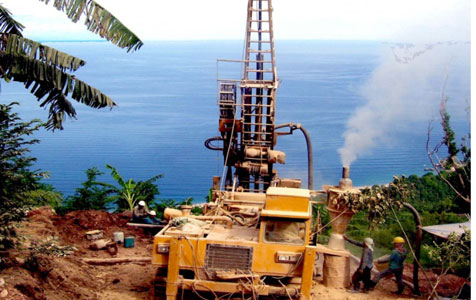 Drilling activities at the Batangas project, located around 100km south of Manila in the Philippines.

Red Mountain Mining has withdrawn its $1.4 million rights issue after underwriter Patersons Securities terminated the agreement, as the company’s share price closed lower than the offer price of 0.8 cents for three days.

Under the terms of the underwriting agreement, Patersons had discretion to terminate its obligations on the occurrence of a number of events before completion of the rights issue.

Red Mountain announced the pro-rata renounceable rights issue to shareholders on September 15 on the basis of two shares for every nine shares held, with a one-for-two free attaching option.

The rights issue was announced in conjunction with a $600,000 placement and closed on October 9.

The company had intended to use the funds from the placement and rights issue to drill priority targets and for final permitting at the Batangas Gold project in the Philippines and to complete the definitive feasibility study.

Red Mountain managing director Jon Dugdale said in May that the company aimed to complete the DFS so that it was in a position to finance and develop Batangas as early as next year.

The company announced last week it had returned high-grade silver-gold results from channel sampling at a new target within the Batangas project.

“The discovery of these new zones opens up potential to define additional, high grade silver-gold resources, and continue to upgrade the at surface mineral resource base, at the Archangel Project,” Mr Dugdale said in the announcement.

Red Mountain will return all funds received from shareholders for the rights issue and said alternate funding options were being considered.

The company requested a trading halt pending a further announcement to the market.

Red Mountain shares were 0.6 cents at close of trade today.