Wasteless Pantry is proving that a sustainable living focus can be commercially viable for a business, as the Mundaring retailer's founders seek to branch out into franchises in other suburbs across Perth. 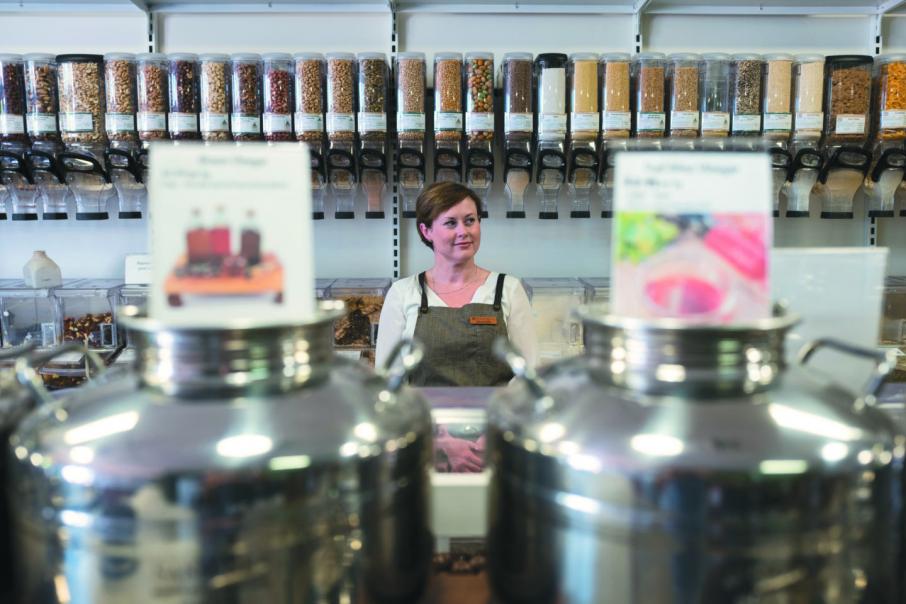 Wasteless Pantry cofounder Jeannie Richardson says passion for the environment will be a necessity for a franchisee. Photo: Attila Csaszar

Wasteless Pantry is proving that a sustainable living focus can be commercially viable for a business, as the Mundaring retailer's founders seek to branch out into franchises in other suburbs across Perth.

Acquaintances during their teen years, Jeannie Richardson and Amanda Welschbillig found they shared much more in parenthood than at high school, particularly their desire to reduce food packaging waste and provide a cleaner environment for their children.

It was that passion for change led to the establishment of the first Wasteless Pantry shop in June 2015.

Ms Richardson told Business News she had been frustrated by the lack of options for consumers to shop plastic-free, while she wanted to protect the environment to ensure her kids had a good quality of life.

“While there are a great many aspects to consider to live as sustainably as possible, years ago we could see that plastic pollution and marine debris was possibly going to become as much of a burden on future generations as climate change,” Ms Richardson said.

“And we could see so many ways to drastically and easily decrease society’s reliance on single use plastic.

“I guess that’s why the store evolved to become (not just) about buying package free food, but also about living a generally low-waste life.”

Wasteless Pantry customers can bring their own containers to collect foods such as grains, beans, dried fruit and pasta or rice, or they can buy reusable containers at the shop.

Demand for the concept is strong, Ms Richardson said, and was boosted by a TV appearance that brought the idea into the mainstream.

Wasteless’s customer base then grew from a group of committed local residents in Mundaring to be more geographically diverse, with shoppers travelling from further afield.

Over a similar timeframe, NSW-based The Source Bulk Foods made a move into Perth, launching in Victoria Park in 2015 and opening two more stores, with three others on the way.

The Source is also intended to target waste reduction.

Other local stores that sell in bulk and allow buyers to bring less packaging include Loose Produce in Como, Manna Wholefoods in Fremantle, and the Clean Food Store in Shenton Park, although they do not all necessarily target zero waste.

The growing interest in the concept, and a desire to help customers to change the way they shop, encouraged the founders to look to grow Wasteless, Ms Richardson said.

But the pair felt that, as mothers, they were limited in the role they could play in any expansion, which led Wasteless to open up applications for franchisees in October.

Ms Richardson and Ms Welschbillig have already begun working with a number of potential candidates, and that relationship would need to be right before a potential location was chosen.

Ms Richardson said they would be very careful to pick franchisees who were passionate about the environment and had the right philosophy driving their involvement.

“It’s important to us that we choose the right people, with the right motivations,” she said.

A further benefit to a franchise model was that franchisees could harness local knowledge, she said.

Despite the perception that a focus on sustainability might make the concept uncommercial, Ms Richardson said Wasteless was still a profitable business.

“(Potential franchisees) can earn a comfortable living,” she said, while noting it was not the place for someone who only cared about profit.

Ms Richardson said work had been done to keep costs down in order to make the concept financially viable.

Part of the benefit of the Wasteless model was its economical use of space.

That was because food dispensers could easily be stacked on top of each other, like bricks, ultimately meaning more productivity per square metre.

The model seems to work from an environmental point of view, with Wasteless claiming to have produced just 1.4 kilograms of landfill waste in May, while the average household would produce 200 times that.

Landfill use is also a fraction of the rate of the average retailer, while usage of recyclables was far higher.