Passing on the baton

Ross Neuman is stepping back from his role at Port Bouvard 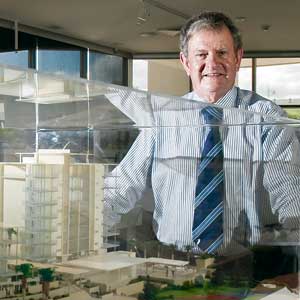 Ross Neuman is stepping back from his role at Port Bouvard

Stan Perron. When I was a homebuilder he was one of the developers I bought land from. He's a man of few words, but he's come in with a lot of advice over the years. He probably doesn't know he's one of my mentors. I speak to him a few times each year. His success is second to none in this state.

What is your business mantra?

There's one that a lot of people say about me, "When Neumann does it, he does it properly or not at all". All my life I've never done temporary things. You do your best for an asset because that's what's expected of you.

What is your typical work day?

I'm up at 4.30am, then walking and swimming. I give my wife a cup of tea in bed. I'm usually in the office by 7.15am. I try and do all my office work in the morning, have meetings in the afternoon. I'm home early, by 6pm.

What would you do if you were state premier for a day?

Streamline the systems and give responsible developers with a track record [the ability to] get on with it. I think developers of distinction - of which we are one - should have some respect for the way we do things, and should be allowed to do things quicker than inexperienced people, who a) don't know what they're doing, and b) put extra burden on local councils.

Where do you see yourself in 10 years??

Still living in Perth. My wife wants a farm down Margaret River way, so we'll buy a farm down there and take life a little big easier. I'll still be director of the company.

OUTGOING Port Bouvard managing director Ross Neumann is looking forward to taking it easy, having helped build the company from a fledgling mortgage originator to one of the state's most noted property developers.

"I'm not getting any younger, I'm in reasonable health, I've got things I want to do," Mr Neumann told WA Business News.

The timing of his departure coincides with the ushering in of the next phase of the company's growth.

Several of its planned development projects are expected to come online by mid-2009, and Mr Neumann is happy to pass the reins over.

"It needs a big time commitment. Whoever's going to drive the next phase needs to spend two, three, five years in the chair," he said.

"We need someone younger to come in, with a bit more energy.

"Everyone knows what the right time is to make those kinds of moves."

His vision helped spearhead the further redevelopment of the Mandurah canals precinct, transforming part of the area from "moonscape", according to Mr Neumann, to one of the state's most prestigious waterfront developments.

"I am proud of Mandurah, I'm always proud to go back and show people through the development," he said.

Mr Neumann is a self-made businessman. From humble beginnings, growing up on a dairy farm behind Byford, his motivation to succeed was evident from an early age.

After spending six years in the air force, his first job was selling real estate for General Agency.

Wanting more of a challenge, he established homebuilder Statesman Homes in 1971.

After building 3,500 homes, Mr Neumann sold out of the company in 1982 and decided to enter property development, seeking an even greater challenge.

He co-founded development company Cedar Woods and spent 10 years as the company's managing director, before departing to take control of Port Bouvard, then-known as Menzies Court Holding Ltd, in 1998.

Describing the company as very fragile at that time, he focused the company on property development.

Having worked on the Mandurah canals development with Cedar Woods, Mr Neumann did a deal for the assets of what would become the Port Bouvard residential estate.

"It was a good asset, ahead of its time," he said.

"Taking over a failed project was a big challenge. In 1998 things were tough financially, a bit like they are now."

The development now comprises three precincts containing a total of more than 2,000 lots, including the 67-luxury apartment development Oceanique in the Southport precinct, which is due for completion in early 2010.

The company also bought and developed Princeton Private Estate in Stirling, which includes 600 properties and is home to about 2,000 residents.

The company's strategy changed again in mid-2006 when, on Mr Neumann's recommendation, it was decided Port Bouvard would continue as a developer instead of winding up.

"I thought we'd do ourselves a bit of good; we had a good name, good staff working for us, we should give a chance for them to stay longer with the company and give it a future," Mr Neumann said.

Port Bouvard then went on the acquisition trail, buying land in Dawesville, Point Grey, Melros in the Peel region, Gidgegannup and Esperance, over a 12-month period.

Now, the company is scouting for a new managing director, and is looking to sell some of its assets, with the exception of core developments at Point Grey in the Peel region and Gidgegannup.

Meanwhile, Mr Neumann is looking forward to a quieter life with his family.

"My wife wants a farm down Margaret River way, so we'll buy a farm down there and take life a little bit easier."