A plan to rename some WA Legislative Assembly seats has drawn fire from both sides of politics. 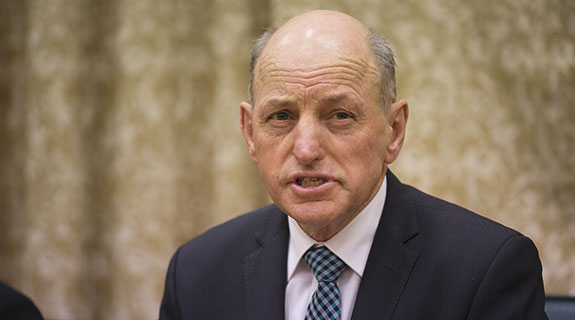 SITTING: The Liberal Party has objected to the recommended abolition of the regional seat of Eyre, which is held by former minister Graham Jacobs. Photo: Attila Csaszar

Western Australia’s Electoral Distribution Commissioners have achieved a rare feat. They have managed to unite the Labor and Liberal parties on one of their initiatives –united in rejection, that is.

The parties have strongly objected to the proposal that some of the 59 Legislative Assembly seats be renamed after prominent figures from the state’s past, rather than the usual policy of a seat’s geographic location.

The independent commissioners, headed by retired Supreme Court judge Neville Owen, are required to review the boundaries of the 59 Legislative Assembly seat to ensure they comply with legal requirements.

The key point is that they have a roughly similar number of voters in line with the one vote, one value principle.

This time round the job has been made more challenging by the state's rapid population growth during the past 10 years, thanks to the energy boom.

In their preliminary report, the commissioners raised a few eyebrows with their recommendation to remove the Liberal-held seat of Eyre, taking in Esperance and surrounding regions, and adding a new seat of Baldivis in the rapidly growing south of the metropolitan area. Based on previous voting figures, Baldivis looks like a potential Labor gain.

On this score the commissioners are justified in saying they are simply doing their job – redrawing boundaries to reflect shifts in population.

Not surprisingly, Labor is happy with the Baldivis plan. The Liberal and National parties are appalled.

Such disagreements are standard fare for redistributions. But the plan to rename seats was a surprise and has brought the big parties together.

The commissioners cited rapid population changes in some areas, which meant the geographic names were no longer appropriate in certain seats. New geographic names would have to be found. But if the electorate were badged after a prominent historical figure, no name change would be needed.

“Where it is possible, the person or event after whom the district is to be named should have some demonstrable connection to the geographical locality in which the district is situated,” their report said.

“However, the commissioners acknowledge that there will be many occasions on which the nature of the contribution made by the person will make it difficult to achieve that criterion.”

So a can of worms was opened. It is proposed that some of the prominent figures to be honoured include pioneer Georgiana Molloy, aviator Norman Brearley, writer Walter Murdoch, vigneron Jack Mann, two bishops – Dom Salvado (Catholic) and Matthew Hale (Anglican) – and the Burt family.

Coincidentally “Burt”  is also the recommended name for the new federal seat based on Armadale-Gosnells. Something will have to give.

The commissioners noted “it would be better to avoid the name of a person who had a strong connection with a political party or group that is still active”.

In addition, they said “the criteria for selecting names ought also to recognise the desirability of achieving gender balance and ethnic diversity”.

Not only did the Liberals register “strong reservations”  about the policy change on names, describing it as unfortunate, they said seven of the name changes were unnecessary.

The Liberals also objected to avoiding the names of people with strong political links.

“This exclusion casts an unintended slight on those former members who have made deep and selfless contributions to the Western Australian community,” the Liberals' said.

Labor also had a string of reasons why the name changes should at least be shelved for the time being, noting they would only cause more confusion among voters. Labor also agreed with the Liberals' concern  over the absence of Aboriginal names.

Labor said  the proposal seeked to change two districts, which already had Aboriginal names – Willagee, a Noongar name, and Girrawheen, which means “place of flowers”.

“WA Labor believes it is not appropriate to adopt these name changes at this time and appreciates that now this policy change has been flagged, it will allow the community to properly consider name changes for future redistributions,” the party said.

But there is still plenty of disagreement among the parties. Just as the Liberals object to the abolition of Eyre, held by former minister Graham Jacobs, Labor has protested at the redrawing of boundaries for Collie-Preston, held by shadow minister Mick Murray.

The commissioners propose that Mr Murray's seat be renamed Collie-Capel. The relevant boundary changes also make it harder for the veteran Labor MP, whose heartland is in Collie itself, to hold on. He scraped home last time by 0.1 per cent. The suggested changes, based on voting in 2013,  put him 3.9 per cent behind.

So the commissioners have plenty to ponder as they reconsider  the boundaries on which the 2017 state election will be fought.

Anxious MPs must wait until November to learn the final shape – and names – of the seats on which their political futures could hang.