Companies have an opportunity to attract talent with improved parental leave policies. 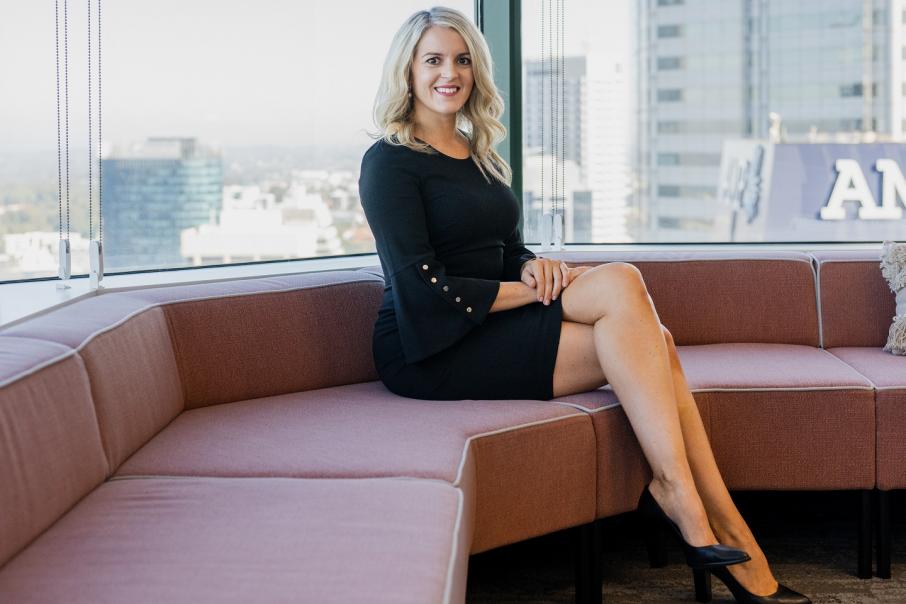 The uneven division of household labour and childcare is established in the first few months after a baby is born, according to economist Silvia Salazar.

Dr Salazar, who works as a researcher at Bankwest Curtin Economics Centre, said if a heterosexual couple shared childrearing and both parents had the chance to bond with the child, future care would be split more equally.

“If they [men] don’t start changing the diapers early on, then they will never do it,” Dr Salazar told Business News.

She said this research indicated the importance of providing equal opportunities for both parents to take parental leave.

“Once the men take parental leave, they get really involved with the care of their children,” Dr Salazar said.

“That will take a lot of domestic work and childcare responsibilities done by women away from them.”

Data shows it is women who take most of the parental leave in Australia, setting them up to continue to take on more of the childrearing and household chores.

This flows on to working patterns, with women who recently had children less likely to engage in full-time work.

Dr Salazar said this contributed to the gender pay gap.

The government’s parental leave policy is one of the levers, among reforms like cheaper childcare, that could be used to change this trajectory.

Australia’s current parental leave policies are among the least generous of all OECD countries.

In the recent federal budget, the government changed its parental leave policy to offer 20 weeks paid at minimum wage to be shared between both parents, and 20 weeks for single-parent families.

It also scrapped the income level test for mothers and replaced it with a household income threshold of $350,000 per year.

Parents can opt to take 52 weeks of unpaid leave.

Dr Salazar said this was an improvement from providing 18 weeks to the nominated primary carer and two weeks to the secondary carer.

However, while this system seems more flexible, she said it was likely women would end up taking the whole 20 weeks as it was less socially accepted for men to take leave.

“I think this change in policy is probably not the best if we want to incentivise men to do more childcare responsibility,” Dr Salazar said.

Another concern with the government’s policy is that it doesn’t include superannuation, further widening the gap between men and women in super funds available at retirement.

In 2019, Labor took the promise to pay superannuation to people on parental leave to the federal election.

In Germany, both parents are incentivised to take at least two months of their 26 weeks of parental leave by being offered an extra two months.

In Sweden, parents are offered 68 weeks each and have 90 days reserved for each parent.

According to modelling from Equity Economics, commissioned by parents and carers movement The Parenthood, if the average Australian woman had the same workplace participation after having children as an average Swedish woman, she would earn an extra $696,000 over her life and retire with $180,000 more superannuation.

Ms Speers started her new role earlier this month, having worked in recruitment for more than a decade.

“This could be a game changer for retaining female talent,” Ms Speers told Business News.

“If you truly support an employee who is going through that motherhood journey, truly support them wholeheartedly, financially and physically, you will get serious loyalty.”

Alongside her role leading the advocacy organisation, Ms Speers is also undertaking a PhD on how mining companies can attract and retain female workers.

Ms Speers said she started her research after finding mining companies were consistently asking how they could keep female talent.

As part of her research, she looked at the different parental leave policies of the 10 biggest miners.

Ms Speers said best practice involved offering leave on top of the government provision, ensuring it was gender neutral, doing away with ‘primary’ and ‘secondary’ carers definitions, and bumping up the number of weeks.

Businesses could also ensure superannuation was paid on parental leave and remove any penalties for parents who don’t return to work and eligibility requirements to access leave, like having to be there for six or 12 months, she said.

According to the Workplace Gender Equality Agency, the companies with top policies are offering as much as 26 weeks.

Six per cent of employers offer more than 18 weeks, and the most common length of paid primary carer’s leave is between seven and 12 weeks.

WGEA’s latest data collection found 81 per cent of organisations that had parental leave policies included superannuation in their packages. 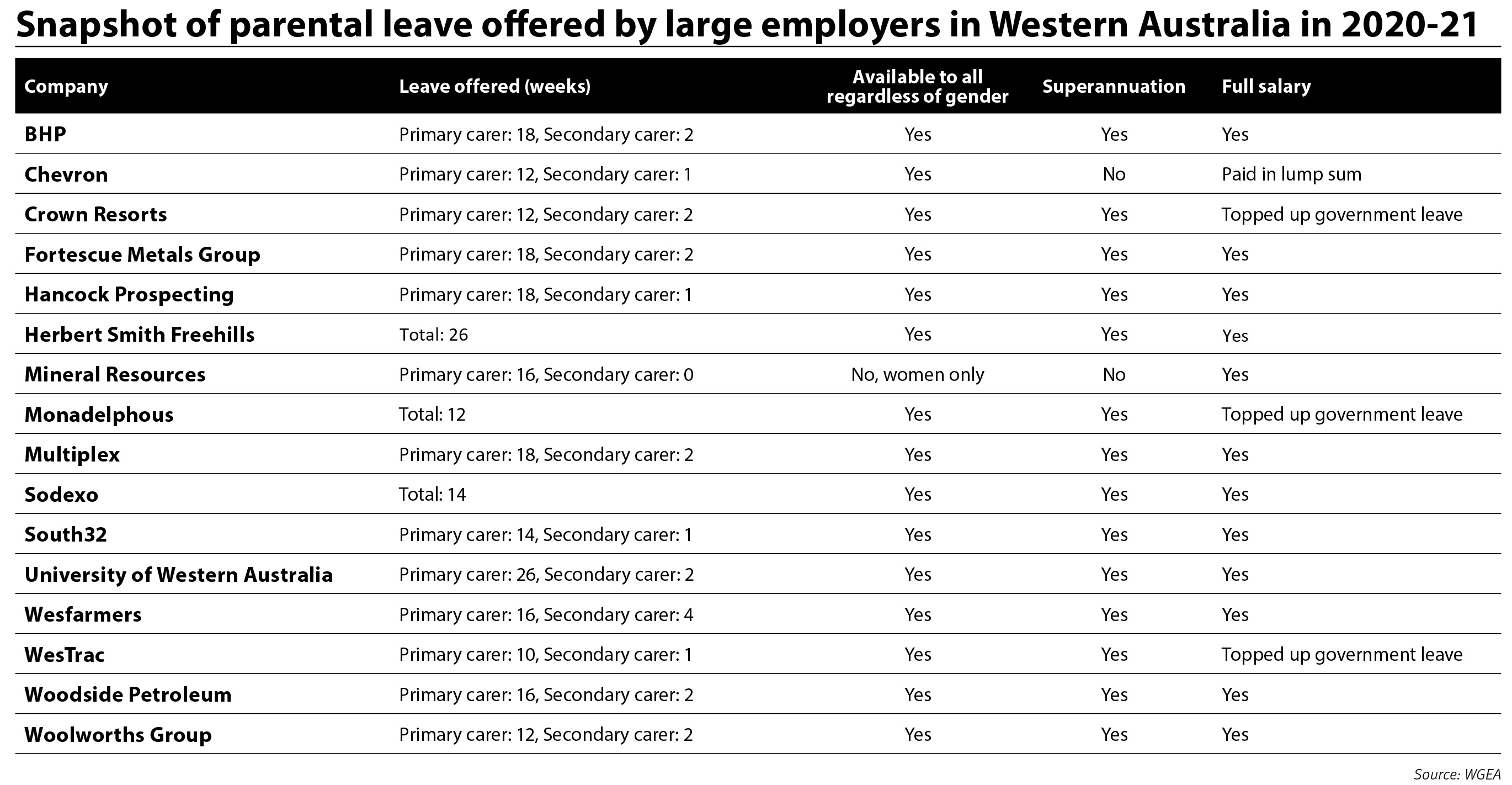 Three employers, Monadelphous, Herbert Smith Freehills and Sodexo, have done away with the ‘primary’ and ‘secondary’ carers titles to allow either parent to take leave.

Mineral Resources was the only company Business News found to have continued to make primary carers leave gendered.

It offered 16 weeks to women and zero for the secondary carer.

Most organisations examined offered between 18 weeks and 10 weeks for primary carers and between zero and four weeks for secondary carers.

The University of Western Australia, as well as Murdoch University, offered the gold standard 26 weeks for primary carers.

Herbert Smith Freehills recently changed its offering to give 26 weeks to all parents regardless of primary or secondary status, making it one of the most generous policies in Perth.

While parental leave was becoming more accessible to both genders, WGEA found only 12 per cent of males took it.

Ms Speers said cultural change within organisations was needed to make it acceptable and expected for men to take parental leave.

A report by KPMG published in April 2021 referenced the example of QBE’s parental leave scheme, Share the Care, which eliminated the use of ‘primary’ and ‘secondary’ carer and offered 12 weeks of paid parental leave to every new parent.

Dr Salazar said once some men took leave, more would avail themselves of the opportunity.

“It’s not only about giving the possibility for men to take that leave but also making it normal and incentivising men to take it,” she said.

“That’s what we need if we are going to have more equality in childcare.”